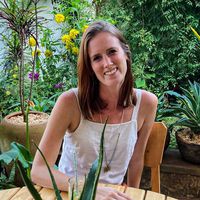 Alicia Erickson
Writer
Alicia is a writer, photographer, and social entrepreneur specializing in sustainable travel, wildlife and nature conservation, and environmentally friendly agriculture and eating. She holds an M.S. in Comparative Politics and Conflict and a B.A. in International Development and Human Rights.
Learn about our editorial process
Elizabeth MacLennan

Elizabeth MacLennan is a fact checker and expert on climate change.
Learn about our fact checking process
Culture
In This Article

Econyl is a material similar to nylon that is made entirely from recycled waste products. Old fishing nets and carpets, among other abandoned textiles, are used to make this recycled fabric, which was conceived as a greener alternative to traditional nylon.

Econyl is generally quite tough, like nylon, and can easily be woven into everything ranging from garments to industrial textiles. This fiber is recognized for being quite stretchy when it is woven, though it is not elastic in its raw form.

While elasticity is one of its main draws, unfortunately, econyl generally lacks durability and is not moisture-wicking. Another downfall of econyl is that it is highly flammable, melts if it catches fire, and can even melt when washed at very high temperatures.

How Econyl Is Made

The production process for econyl starts with collecting waste that is otherwise polluting the earth including carpet flooring, fabric scraps, fishing nets, and industrial plastic from all over the world. After it is collected, the waste is cleaned and sorted to recover all nylon possible.

Through a regeneration and purification process, nylon waste is then restored back to its original form. Econyl regenerated nylon is then processed into yarns and polymers that are used to make clothing and home interiors.

Once products containing econyl are no longer useable to the consumer, they can go back to step one of the regeneration system, producing new econyl products. With this process, econyl has the capability of being recycled infinitely.

Econyl is a young material that became available on the market in 2011. Currently, Aquafil is the only known company that produces econyl. The company has locations across Italy, as well as in Thailand, China, and the U.S. state of Georgia.

Econyl is a strong asset to the already existing spectrum of sustainable materials. This textile offers eco-friendly properties from start to finish, which supports the vision of a more circular fashion industry.

Nylon typically has a detrimental impact on the environment, but by using recycled materials to make econyl, the impact is drastically reduced.

For starters, using abandoned fishing nets to make econyl helps to clean up the oceans. Thousands of whales, dolphins, and other sea creatures die each year from entanglement in abandoned nets. By sourcing old nets from ocean waters to produce econyl, this rate of incidence is reduced.

The production process of econyl also offers significant environmental benefits. For every metric ton of caprolactam—the organic compound required to create the fabric—produced in the econyl process, 16.2 gigajoules of energy and seven barrels of oil are saved, while 1.1 metric tons of waste are eliminated and 4.1 metric tons of CO2 emissions are avoided, in comparison to traditional production methods for nylon.

Econyl fabrics can also be recycled continuously without losing their quality, which reduces further waste caused by discarded fabrics and clothing.

Nylon is an entirely synthetic fiber that has its roots in WWII, emerging from a desire to find alternatives to silk for parachutes during the war. After the armed conflict, there was a shortage of traditional dress fabrics like silk and cotton, so nylon soon found another use and quickly gained popularity as a fabric for women’s garments. Due to a number of issues with nylon, however, manufacturers began to mix nylon with other fabrics to make more durable garments.

Econyl is chemically identical to nylon 6, meaning that it shares the same characteristics as everyday nylon and can essentially be used in the same way that nylon is used. Like nylon, econyl is stretchy and can be used in tights, swimsuits, and athletic wear, among other apparel.

The difference between the two fabrics lies in how they are produced. The production process of nylon results in a relatively negative impact on the environment, creating a toxic greenhouse gas known as nitrous oxide.

The production process also uses large amounts of water and consumes significant energy. On top of that, nylon isn’t biodegradable, which means that it ultimately contributes to large amounts of waste, while econyl can be recycled.

Uses and the Future of Econyl

Econyl is commonly used for both apparel and industrial purposes. The most common industrial application of econyl is for flooring and carpets, though it can also be used to make products like ropes and lines. In the apparel world, econyl can be used in clothing items typically made from nylon, such as stockings, tights, and leggings.

In an era when sustainability is at the forefront of trends, major clothing brands have also started to use econyl in swimsuits, underwear, and sportswear.

There is great potential to capitalize upon the younger generation’s interest in environmental sustainability and become innovative with how econyl is used in the latest styles. The recyclability of econyl allows fashion brands and carpet producers vast room for innovation in designing new and reimagined products from econyl.

If production expands beyond just the reaches of Aquafil, econyl could replace nylon altogether. With nylon accounting for 60% of a reported 1.4 million tons of fiber manufactured in the U.S. each year for the production of carpets alone, replacing nylon with econyl would alleviate a significant burden on the environment and would make a notable mark in the world of sustainable fashion.