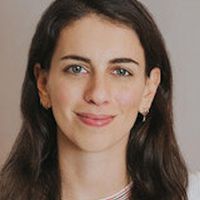 Kate Bratskeir
Writer
Kate Bratskeir is a journalist and the author of "A Pocket Guide to Sustainable Food Shopping." She previously worked as a senior food editor at Mic and covered sustainability, mental health, psychology and nutrition at HuffPost. Her work has appeared in Vox, Fast and Co. and more.
Learn about our editorial process
Home

Krispy Kreme's neon "hot" light is a beacon of hope for its adoring customers: It promises doughnuts fresh off the line. The pastries are hot, the glaze is melty, and the smell alone can make you weak in the knees.

So it's no wonder that Krispy Kreme is beloved for its staple glazed doughnuts and variety of seasonal sweets. Unfortunately, the chain does not cater to a vegan clientele; while the brand has periodically teased the possibility of a cruelty-free doughnut, it has yet to deliver.

Doughnuts are one of the great pleasures of the world, so if you're eager for Krispy Kreme to deliver a drop that's vegan, we're with you. It's worth fighting for the cause, and you can do so by writing to the company on social media and getting other folks to chime in.

If you do find yourself at this doughnut chain, you can still get some vegan-friendly beverages.

If your pals are all going to Krispy Kreme and you don't want to come away empty-handed, there are some vegan drinks available on the menu. If you're in the mood for something super sweet and refreshing, go for one of the chain's frozen chillers.