Save energy and space with one of these top models.

Arricca SanSone
Arricca SanSone is a health and lifestyle writer, specializing in home, shelter, and gardening. She has written for Dotdash since 2019.
Learn about our editorial process
Fact checked by
Elizabeth MacLennan

Our editors independently research, test, and recommend the best products; you can learn more about our review process here. We may receive commissions on purchases made from our chosen links.

Whether you use it to reheat leftovers or cook your favorite dishes, a microwave is a must-have in most kitchens. Many microwaves now also feature a convection cook setting, which uses a fan to circulate air and maintain oven temperature for faster, more efficient cooking. If you have a small kitchen, apartment, or dorm room, you’ll also want a combination unit that won’t hog a ton of space.

Although cooking only uses about 1% of a home’s overall electricity, every bit you can save counts. In fact, every kilowatt-hour of electricity you don’t use prevents nearly a pound of carbon dioxide from being released into the environment. Because both microwaves and convection settings cook foods faster than conventional methods, you’ll use less energy. Plus, you don’t heat up the house on hot days, which is a plus because cooling consumes the most energy in your home.

Ahead, our top picks for the best convection and microwave ovens for small spaces:

The Rundown
Best Overall:
GE Profile Convection Over-the-Range Microwave at Abt.com
The enamel interior allows for quick cleanups whether you’re using the microwave or convection features.
Best Large Microwave:
Panasonic Microwave Oven at Walmart
This microwave has 2.2 cubic feet of interior space, which is one of the largest on the market.
Best Small Microwave:
Samsung 1.1 cu. Ft. Countertop Microwave with Grilling Element at Amazon
Small but mighty, this compact microwave offers 1000 watts of power.
Best Budget:
Toshiba Countertop Microwave Oven with Convection at Amazon
Eco Mode minimizes standby power by 50% when not in use. 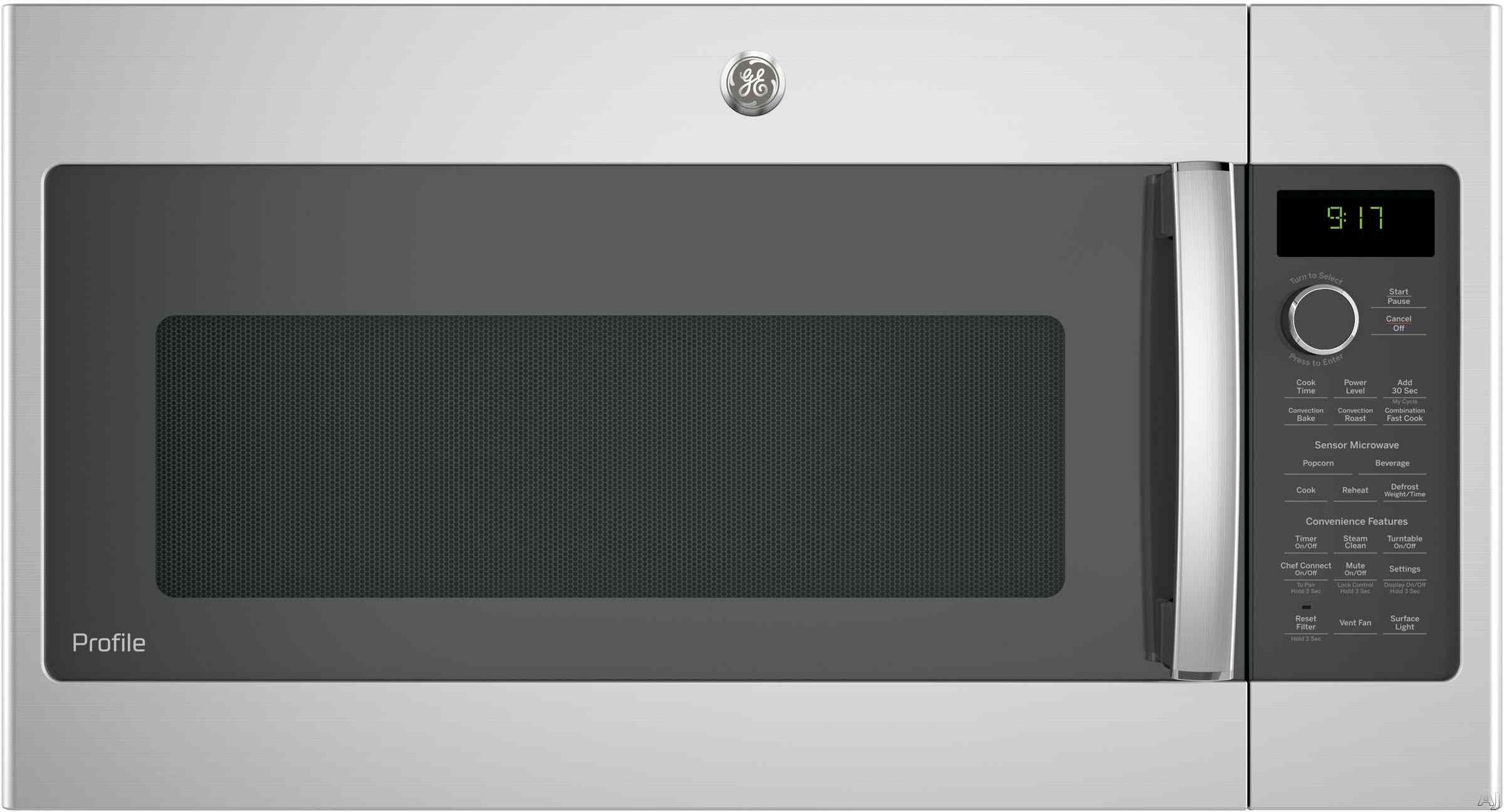 It's so intuitive and simple to operate that you can use the convection feature as often as the microwave function. There's also a removable rack that allows you to cook multiple dishes at once. In addition to the ever-popular stainless finish, it comes in other colors including slate, white, black, and black stainless to coordinate with any kitchen.

4.8
View On Walmart View On Wayfair View On Amazon

This microwave has 2.2 cubic feet of interior space, which is one of the largest on the market. It can be used both as a countertop and built-in unit, using the optional cabinet trim kit (purchase separately).

A turbo defrost (for all those times you forget to take something out of the freezer before work), a keep warm feature, sensor cooking with 14 preset menus, and a child safety lock round out its robust features. It can be used either as a countertop or installed unit, and it heats evenly and quickly. 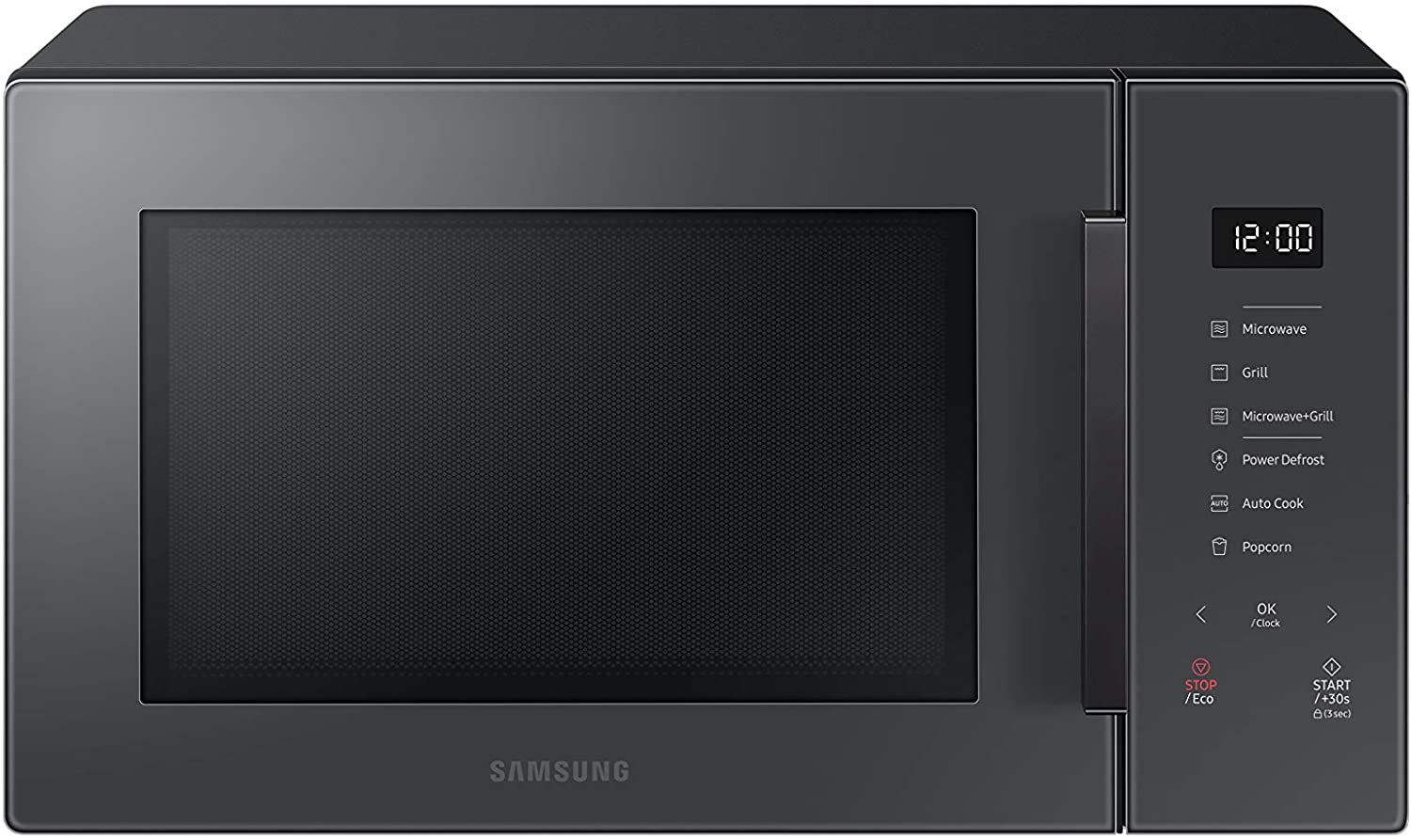 View On Amazon View On Abt.com View On Ajmadison.com

This compact microwave still offers 1000 watts of cooking power, yet it takes minimal space on your counter. The LED display is streamlined with a simple control panel and start button, with no number pad. The interior is ceramic enamel for easy cleaning, and there’s a grilling option to crisp up foods on the included ceramic plate and stand.

An energy-saving mode allows you to turn off the display when not in use. The minimalist interface is good for anyone who doesn't care about having a lot of different heating choices. 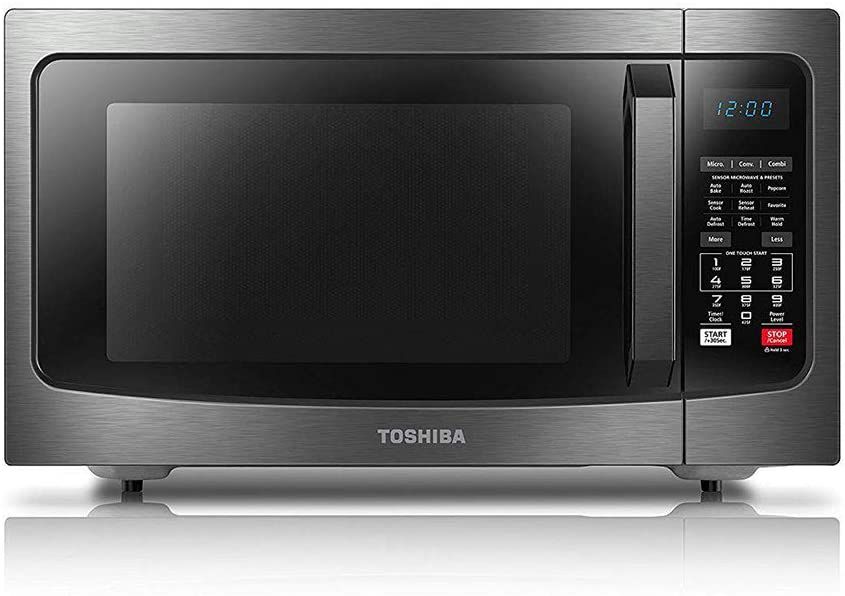 This countertop unit boasts 1000-watts of power and 1.5 cubic feet of interior space. It offers pre-set 14 auto "menus," as well as a sensor that can automatically detect the humidity level of contents, adjusting time and temperature as it cooks.

A hold function keeps food warm, while the stainless steel interior is bright and easy to clean. Eco Mode minimizes standby power by 50% when not in use. You also have an option to mute the oven's buzzer. It offers both microwave and convection in a compact and reasonably priced package.

Our top pick is the Over-the-Range Convection Microwave: GE Profile (view at Home Depot) for its interior space that is ideal for most families, as well as its convection feature and efficient LED task lighting. But if you’re looking for a budget model, the Toshiba ECO42A5C-BS Countertop Microwave with Convection (view at Amazon) offers lots of features for a reasonable price and includes an Eco Mode function to turn off the display panel when not in use.

What is the difference between a convection oven and a microwave?

First available in the 70s, microwave ovens use an electron tube to produce microwaves, which are reflected off the oven walls. Microwaves cause water molecules in food to vibrate, which creates heat that cooks the food. Foods that are high in water content, like fresh veggies, cook faster than other items in the microwave. Microwaves are efficient because the energy heats only the food, not the whole oven.

Convection ovens were created in 1967 and were used first by professional bakers, but they’ve become increasingly available for home use during the last decade. A convection oven uses a fan and exhaust to circulate air and keep the temperature constant, which reduces cooking time and hot spots in dishes. It also decreases the amount of moisture in the oven to crisp up foods.

If your home is powered by clean energy, both these types of cooking can be done without fossil fuels, so they can be better for the climate than gas ovens, which burn methane.

What are the pros and cons of a convection oven?

A convection oven bakes foods such as vegetables or casseroles faster and often can be used at a lower temperature than in a conventional oven. Because of better heat circulation, you also can bake multiple foods on different racks at the same time. But convection isn’t ideal for every type of food; for example, some items such as baked goods require more moisture to achieve the correct texture, and moisture is reduced by the fan system in a convection oven.

Convection microwaves also are handy as a second oven when entertaining because there’s no more trying to figure out when to put what in the oven to have it all done at once.

What should I look for in an energy-efficient microwave?

Unlike other household appliances such as refrigerators, there’s no EPA EnergyStar label or recommendations for microwave ovens. However, microwaves are more energy efficient in general than conventional cooking because foods cook faster and the energy heats only the food, not the whole oven.

Another benefit? Foods also may retain more nutrients because they’re cooked quickly and without adding water. Microwaves range from 700 watts to 1200 watts. If you plan to cook meals or reheat casseroles, a full-size unit (usually defined as 900 to 1000 watts) makes sense. Some units also offer an Eco Mode function, which shuts off the display panel when not in use.

At Treehugger, we want to help you use less energy throughout your home. Arricca SanSone specializes in writing about home, shelter and gardening.