Russell McLendon
Writer
Russell McLendon is a science writer with expertise in the natural environment, humans, and wildlife. He holds degrees in journalism and environmental anthropology.
Learn about our editorial process
Garden
In This Article

Tomatoes are some of the most popular crops for home gardens, and it’s not hard to see why. Not only are homegrown tomatoes widely touted as superior to store-bought, but they can be prolific and easy to grow, and with so many different types of tomatoes available, gardeners have a lot of interesting options to choose from.

Yet sometimes the abundance of tomato varieties can make it hard to decide. One way to narrow down your options is by asking yourself a question you should probably consider anyway: Do you want to grow determinate or indeterminate tomatoes?

In general, determinate tomato plants are smaller and more compact, with a shorter and sometimes earlier window of fruit production. Indeterminate tomatoes grow and produce fruit longer into the summer, potentially providing tomatoes well into autumn. Although it’s often seen as a binary distinction, some cultivars are more strongly determinate or indeterminate, and some with a mix of traits are even considered “semi-determinate.”

Here is a closer look at the specific characteristics of each type, as well as how to choose which is best for you, what they’ll need to thrive, and examples of each.

Also known as “bush tomatoes,” determinates are generally stockier and less aggressive. After an initial burst of vertical growth, they tend to stop before they reach 4 or 5 feet tall, at which point they shift their growth to side shoots and fruits. These growth habits are driven mainly by allelic variation in the “self-pruning” gene family, which is also involved in determinate tomatoes’ early flowering and fruit yields.

In addition to the short size of the plant, determinate tomatoes usually have a shorter fruiting stage, often producing fruits for only about a month before they’re done. They can still produce a lot of fruit in that brief window, however, and determinate tomatoes include many of the earliest-producing varieties. Plus, because the plants die earlier in the season, they can free up garden space for new plantings.

Determinate tomatoes may need less support than indeterminate varieties, again thanks to their modest stature and growth habits, although some type of stake, trellis, cage, or other support is still commonly recommended.

Even if a determinate tomato plant seems too short to need support, remember it may produce a blast of fruit all in a matter of weeks. The weight of these tomatoes could pull down and potentially injure the plant if it’s unsupported, especially in wind. Research suggests vertical training improves the fruit quality and yield of determinate tomatoes more than horizontal training.

Pruning is not necessary for any tomato plant, but while it might help with some indeterminate tomatoes, it often isn’t worthwhile for determinates, whose growth is already so limited. Some gardeners still prune lower sections of determinate tomatoes to increase airflow, pinching off suckers from the ground up to the first flower cluster. Otherwise, there’s little point in pruning them, since they stop growing once the fruit sets.

Unlike their compact counterparts, indeterminate tomato plants grow and produce fruit for as long as conditions allow.

They’re often behemoths by late summer, sometimes growing 12 feet tall, although 6 or 7 feet is more common. And rather than a barrage of fruit all at once, indeterminate tomatoes offer a slower, longer-lasting harvest that can stretch beyond summer, potentially continuing until the plant is killed by frost.

Indeterminate tomato vines will sprawl across the ground if unsupported, which generally isn’t ideal. They are capable of growing and producing fruit like this, but they’ll take up more surface area in your garden, and lying on the soil raises the risk of disease and pests, not to mention accidental trampling.

These tomatoes typically need to be oriented vertically with stakes, trellises, or cages, which makes them easier to manage and uses garden space more efficiently. When indeterminates are vertically supported, they can be grown about as close together as determinates.

Many indeterminate tomatoes can do well in containers, too—including cherry tomatoes, most of which are indeterminate—but they’ll likely need staking.

No tomatoes require pruning to produce fruit, but some indeterminates might benefit from it. Without pruning, indeterminates often sprawl into unwieldy jumbles that make harvesting more difficult and might require extra support. Pruning lower levels of tomatoes can also reduce the risk of disease, and research suggests it can boost the yield of both semi-determinate and indeterminate tomatoes.

One of the best things about indeterminate tomatoes is their long season of productivity. While they generally don’t start producing fruit as early as determinates do, they do produce a more enduring supply of tomatoes throughout the summer, and often into fall or even winter, until cold weather finally shuts them down.

Which Type Should You Plant?

When deciding whether to plant determinate or indeterminate tomatoes, two important factors to consider are:

Thanks to their compact size, determinate tomatoes are a good option when space is limited. They can be planted 2 to 3 feet apart in the ground, and they grow well in pots. Indeterminates are more prone to sprawl, but if their biomass is sufficiently directed upward, some can also grow well in containers or smaller garden spaces.

Determinate and indeterminate tomatoes also deliver their fruit differently, so it’s wise to think about how you’ll use your tomatoes before you buy seeds. Since determinates produce all their fruit relatively early and en masse, they’re a good option if you want lots of tomatoes quickly or all at once—for making sauce or juice, for example, or for canning.

Determinates can also work well in places with shorter growing seasons, since they’re unlikely to capitalize on a longer season anyway. If you live in a place with brief summers, you might get more bang for your buck from determinate varieties.

Indeterminates are nice for providing a slower but longer stream of tomatoes throughout the summer. If you’d rather pick fresh tomatoes for salads or sandwiches as you want them, you might be better off with an indeterminate variety.

If you have the time and space, it can be fun to experiment with both types of tomatoes, so you can see the differences for yourself. And of course, if you have a favorite type of tomato, it makes sense to try to grow that regardless of whether it’s determinate or indeterminate. 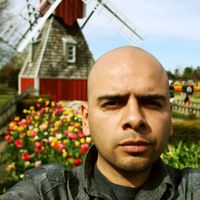 Ramon Gonzalez
Roman Gonzalez is the creator of the urban gardening blog MrBrownThumb, founder of the Chicago Seed Library, and a co-founder of One Seed Chicago.
Learn about our editorial process