Harness the power of worms with these bins.

Arricca SanSone
Arricca SanSone is a health and lifestyle writer, specializing in home, shelter, and gardening. She has written for Dotdash since 2019.
Learn about our editorial process
Home & Garden

Our editors independently research, test, and recommend the best products; you can learn more about our review process here. We may receive commissions on purchases made from our chosen links.

If you want to repurpose kitchen scraps into usable compost, consider harnessing the power of worms! Worm composting, also called vermicomposting, leaves the work to nature.

At the most basic level, worm bins consist of a waterproof container with holes for ventilation. You add moist bedding material such as coco coir or shredded paper; composting worms such as red worms or red wigglers, which you can purchase from worm farms; and raw fruit or veggie scraps (chopped into 1-inch chunks for best results). Worms eat the scraps, which become compost as they pass through their bodies. In time, you’ll see less bedding and more compost. In about 3 to 5 months, you’ll likely have enough compost to harvest.

Some companies make bins that have stacking trays, which you add as the worms fill the bottom tray with compost. Put the new one on top with bedding and food scraps, and the worms will head upstairs to start dining on the next tray of scraps. Many systems also have a type of drip pan that catches liquids created from the process, called worm tea, which also can be used as a fertilizer. Most bins can be used indoors or outdoors, though composting worms thrive between 55 to 75 degrees, so you will need to keep them out of the direct sun and bring them indoors if temperatures drop.

Ahead, our picks for the best worm composting bins:

The Rundown
Best Overall:
The Squirm Firm Worm Factory 360 at Amazon
This composter isn’t fancy in appearance, but this is a good basic system for its simplicity of design and use.
Best Budget:
FCMP Outdoor The Essential Living Worm Composter at Amazon
A series of angled tunnels provides easy access for worms to move between trays.
Best Large Capacity:
Hungry Bin Continuous Flow Worm Composter at Amazon
This extra-large bin can hold up to 13 cubic feet and can process up to 4.5 pounds of kitchen waste per day.
Best Small Worm Composter:
Maze 4 Gal. Worm Farm Composter at Amazon
If you’re tight on space, this is a good introduction to what worm composters can do.
Best Indoor Worm Composter:
Urbalive Worm Farm at Gardeners.com
This sleek and stylish plastic worm bin with hardwood legs comes with two trays, which you rotate as needed when one becomes full.
Best In-Ground Worm Composter:
Uncle Jim's Worm Buffet at Unclejimswormfarm.com
You won’t have to look at the composter if that bugs you, but you can still recycle food scraps. 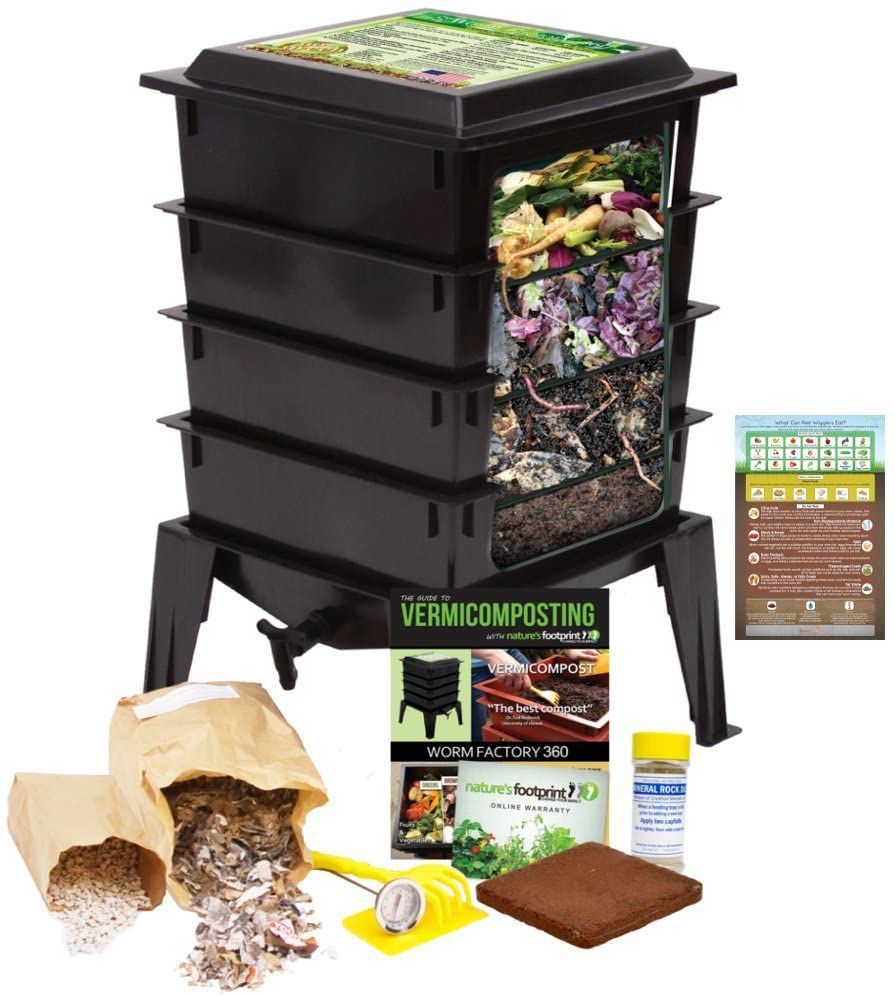 View On Amazon View On Thesquirmfirm.com

This reasonably-priced large composter, which is designed for families of one to four people, comes with four stacking trays and can be expanded to seven trays. The base has a spigot to access the worm tea, and the kit includes starter worm bedding, a hand rake, scraper, manual, and voucher for 1 pound of live worms. It’s made in the United States from recycled plastic and has a 10-year warranty. This composter isn’t fancy in appearance, but this is a good basic system for its simplicity of design and use. 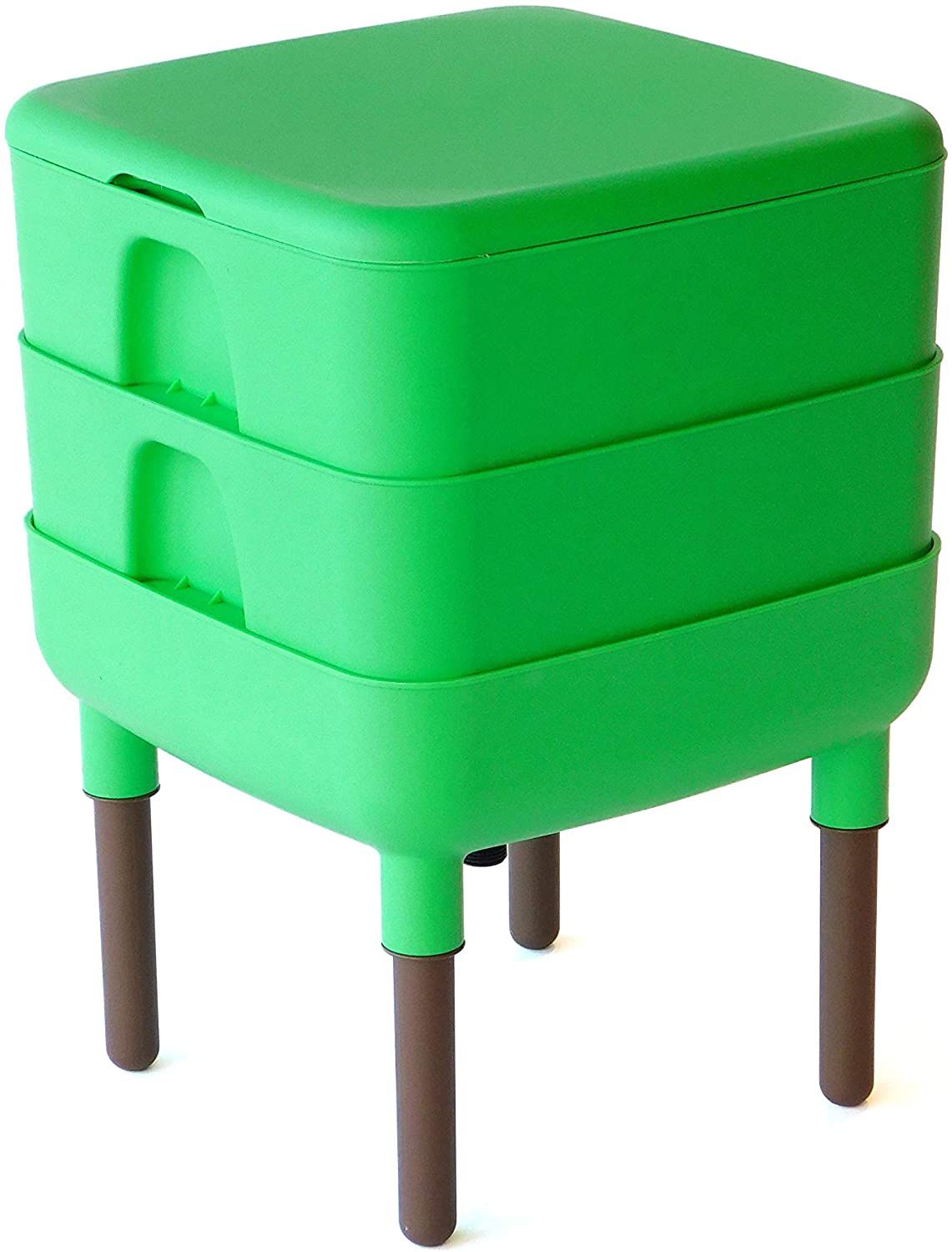 This 0.8 cubic foot composter consists of two stackable trays which have moisture channels to prevent bedding from drying out along the edges of the bin. A series of angled tunnels provides easy access for worms to move between trays. A reservoir base collects worm tea, which can be used for fertilizer and there’s a spigot on the bottom for easy access to this liquid. The unit is constructed from recycle propylene plastic, comes in four colors, and can be used indoors or out. 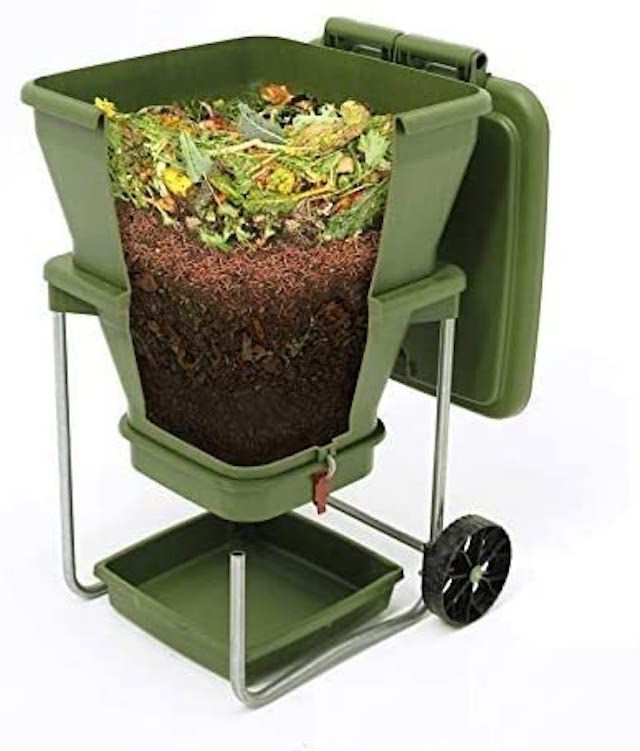 View On Amazon View On Zerowastecartel.com

This wheeled extra-large bin can hold up to 13 cubic feet of material and can process up to 4.5 pounds of kitchen waste per day. Continuous flow means you put food scraps in the top of the bin and remove castings from the bottom, without having to handle trays. The tapered shape helps compress and move the castings downward, but encourages worms to stay at the top because they’re surface feeders, not burrowers like earthworms.

It takes about two to four months for food waste to make it from the top of the barrel to the bottom. The finished compost is accessible with minimal fussing and the click of the latch on the bottom of the bin. It’s made in New Zealand and has a five-year warranty. Its sturdy design and ample space make it a good choice for large families or small commercial settings. It’s designed to be used outdoors, so set it by your back door for easy access. 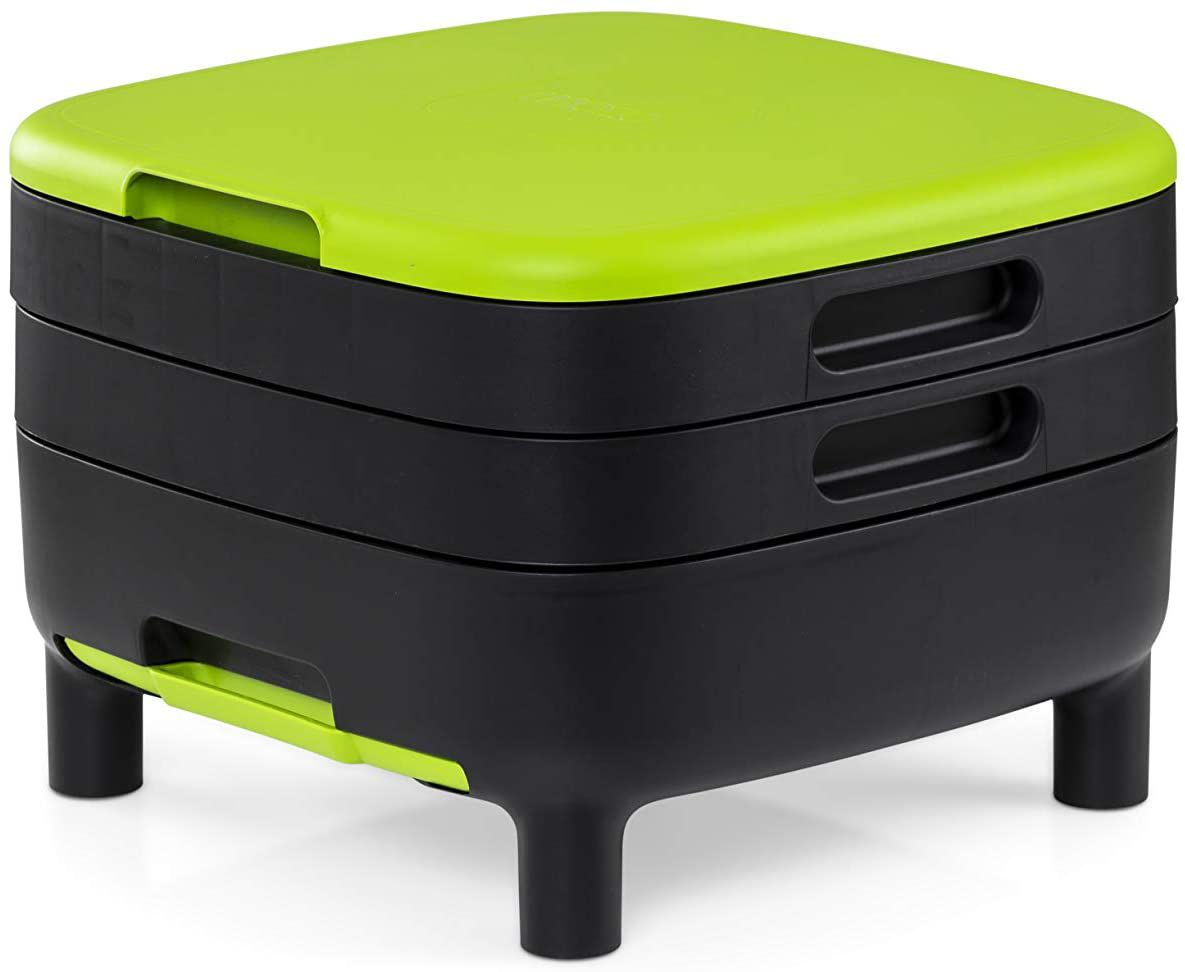 View On Amazon View On Wayfair View On Home Depot

This 3 cubic foot composter comes with two main stacking trays to rotate as needed, and a lid with a handy interior hook so you can hang it from the side of the bin as you add scraps. It’s best used outside because an open drip tray sits beneath the unit to catch worm tea as it drains. This bin also has a perforated "worm saver" tray, to prevent your wrigglers from escaping from the bottom. It’s made in Australia from recycled plastic and has a one-year warranty.

If you’re tight on space, this is a good introduction to what worm composters can do. 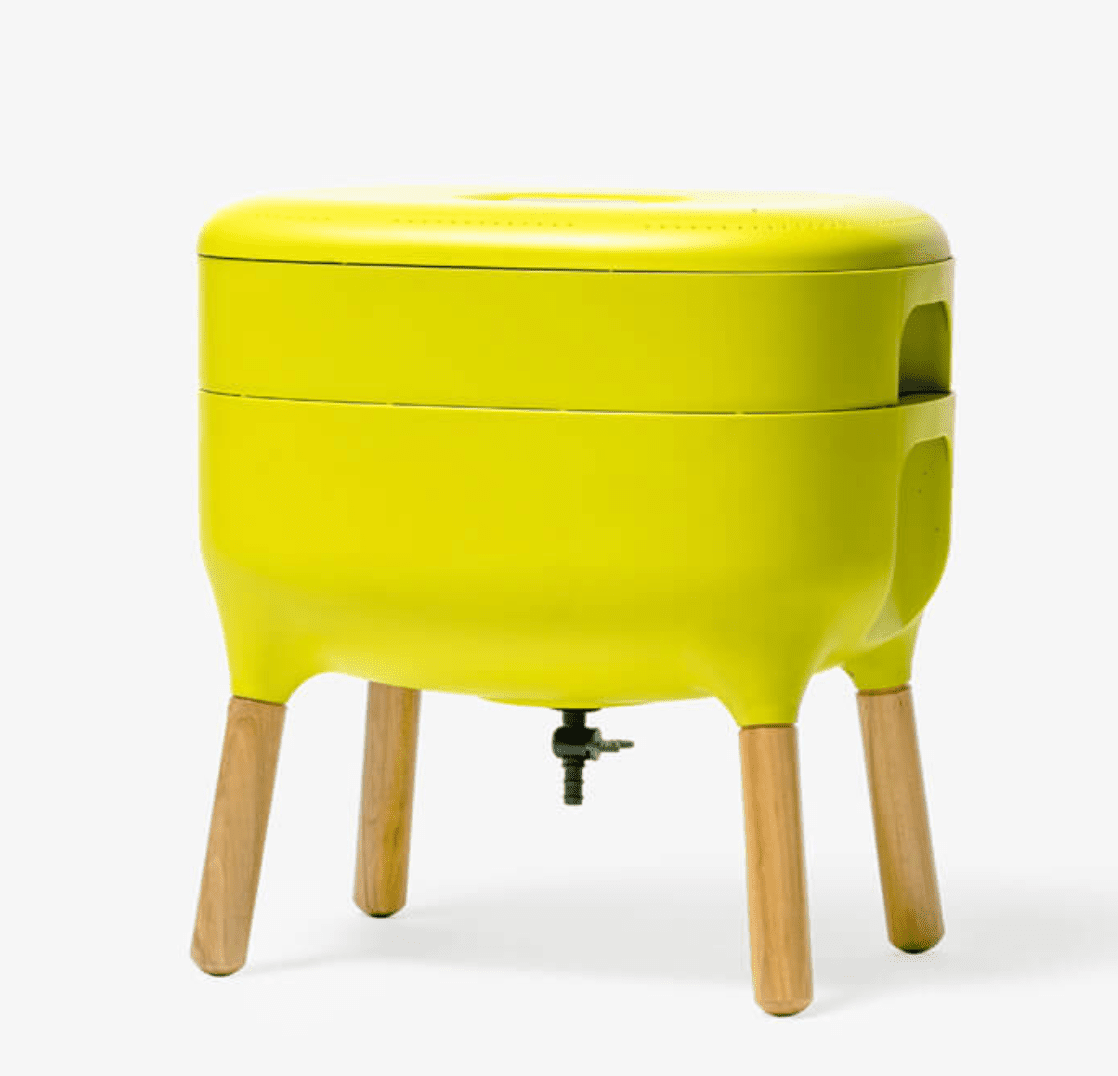 This sleek and stylish plastic worm bin has hardwood legs and comes with two trays, which you rotate as needed when one becomes full. You can add up to a half pound of scraps per day. There’s a spigot to access the worm tea, and the bin comes in two colors. With its small footprint of 19 x 15 x 24 inches, it will fit neatly alongside your counter without hogging too much space. You can also tuck it into a corner of your garage or balcony. It’s made in the Czech Republic. 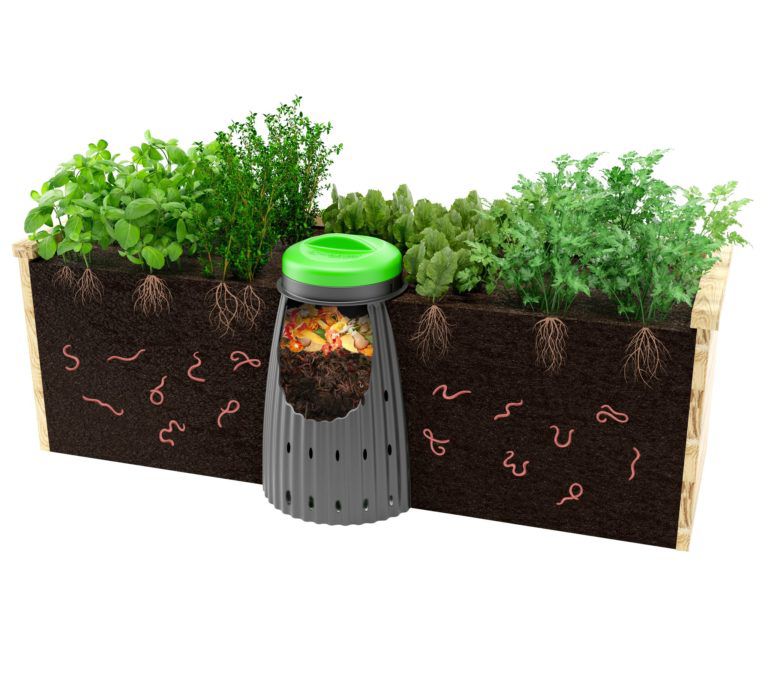 Dig a 16 x 16-inch hole directly in your garden or raised bed, and drop in this in-ground lidded composter. You won’t have to look at the composter if that bugs you, but you can still be able to recycle scraps! It’s designed to recycle 2.5 to 4.5 pounds of kitchen waste each week.

An in-ground composter works the similarly to the other worm bins: Add moist bedding and worms, and let them do their work. The worms deposit castings directly into the garden, moving out when their feast is over and back in when new scraps arrive, with no need for you to empty the container. It’s made in Australia from 100% recycled plastic.

Our top pick for its simple design and reasonable price tag is the Worm Factory 360 Composter (view at Amazon). But the Hungry Bin Continuous Flow Worm Composter (view at Zero Waste Cartel) is a nice splurge for its large capacity and the ease of handling finished compost.

How many worms do I need to start my composting bin?

Most manufacturers recommend how many worms you’ll need to start in each specific bin, but it’s generally around 1 pound, which is roughly 800 to 1,000 worms, for most composters. Worms self-regulate their populations based on the space and amount of available food, so you won’t have to do anything to manage their numbers. Worms can live for about a year in the worm bin. When they die, their bodies, which are about 90 percent water, will become part of the compost.

Where should I put my worm composting bin?

It’s totally fine to put it indoors if you have space, though one caveat: Worms may escape from some types of composters if the conditions are not ideal, such as if it’s too wet or too dry. If you’re on the squeamish side and don’t want to find a few escapees on the floor (it’s not typically a mass exodus), keep your composter outdoors or in the mud room. Also, keep curious pets away, to prevent them from knocking it over.

What should you not put in a worm compost bin?

Like you, worms prefer a varied diet! You can add raw chopped fruits and vegetables, eggshells, coffee grounds and filters, napkins, tea bags, and shredded paper. Worms need about 50% food scraps and 50% fiber and paper to maintain a healthy environment.

Never put rotting food in your bin, which attracts fruit flies (besides worms don’t like decomposing food). Don’t add fruit pits, fats, diary, or meat products. They also have difficulty with hard stems, the papery outer layers of onions, and too much citrus waste like orange peels (make sure it’s not more than about 20% of what you add at any time).

Not if you do it right! They may smell mildly earthy but if things are getting stinky, you have a problem. For starters, bury your food in the bedding, and keep the bedding moist like a damp sponge, not sopping wet. If your worm bin looks dried out, spray it lightly with some water. Also, don’t put in more scraps than the worms can eat within a couple of days; it may take you a few weeks to figure out how quickly they’re going through a handful of scraps.

Finally, large chunks of odiferous foods such as cabbage and onions and even whole banana peels may smell bad on their own; cut them into small pieces and add sparingly.

Treehugger wants to help homeowners reduce and repurpose household waste of all types. To make this list, we looked for worm bins that use recycled materials whenever possible, and researched the market for durable, top-rated, and easy-to-use systems. Arricca SanSone specializes in writing about home, shelter and gardening.