The 6 Best Solar-Powered Phone Chargers of 2022

Stay fully charged even when off the grid.

Steph Dyson
Steph Dyson is a bilingual freelance travel writer, guidebook author, and blogger originally from the UK. She covers sustainability and adventure travel for Treehugger.
Learn about our editorial process
Fact checked by
Elizabeth MacLennan

Whether you’re heading out into the woods for a multi-day adventure or keen on a more gentle car camping getaway, a solar-powered phone charger will keep you connected when access to the grid is limited. Designed to capture as much sunlight as possible, these solar-powered chargers are generally built using multiple solar panels, which help to keep charging speeds as fast as possible, however, charging with solar energy can take hours.

On the other hand, the more solar panels, the heavier the device can be, making some of these choices more appropriate for lightweight backpacking than others. For the most efficient charging, some of the designs combine solar panels with a battery pack to allow you to store energy for when the sun goes down.

So get ready to harness the power of the sun with our selection of the best solar-powered phone chargers. 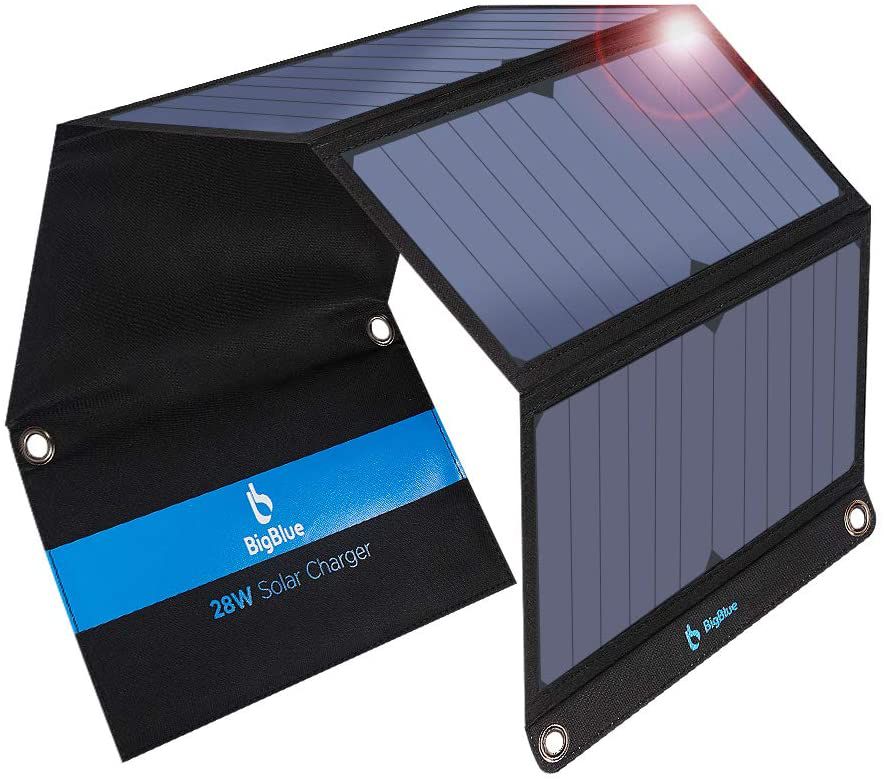 If you want the biggest bang for your buck, this affordable yet reliable solar charger blows more expensive options out of the water. Weighing in at 1.3 pounds, it’s not the lightest of all portable solar-powered phone chargers, but what it lacks in lightness it makes up for in other areas.

With PET Polymer panels of 28 watts, this solar charger is remarkably fast for its price point when it comes to charging speed and competes easily with far more expensive choices. You can charge three devices at once via USB ports.

Bulkier than some options, it’s definitely the choice for car camping or other activities where space and weight aren’t at a premium. All in all, it’s the ideal gadget for your next adventure or to keep on hand in case of an emergency power outage. 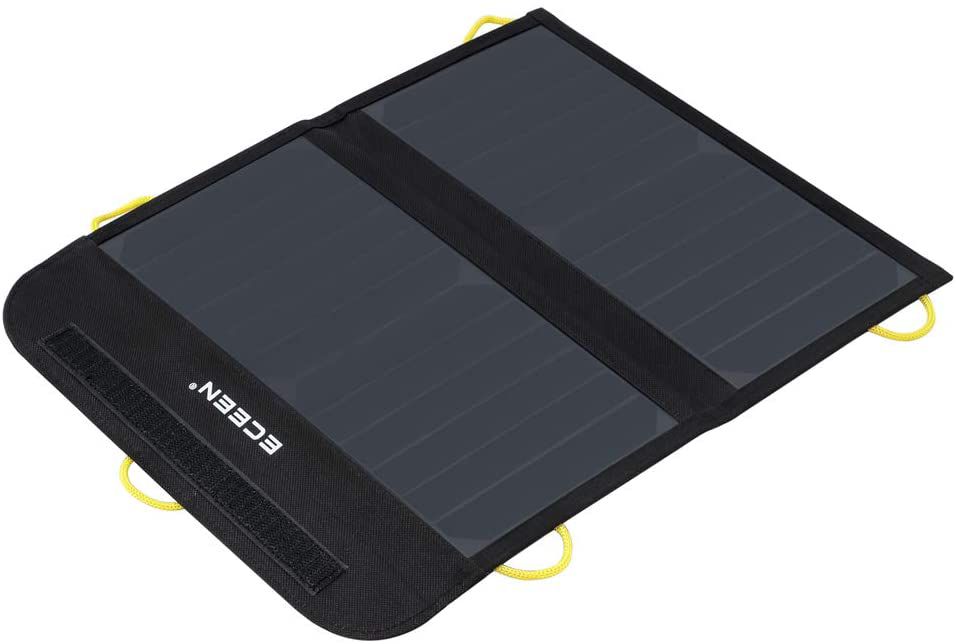 View On Amazon View On Eceen.store

If you’re on the hunt for a no-frills solar phone charger, then the ECEEN solar charger is guaranteed to do the job. Despite having a panel size of only 13 watts, which supplies up to two amps, this charger is remarkably quick to bring your battery back to life.

Weighing in at only 0.85 pounds across two durable, monocrystalline silicon solar panels, it’s also extremely lightweight and will hardly add any bulk to your pack. While manufacturers claim it can charge two devices at once, its low charging power means we recommend using it with just one — patience is definitely a virtue in this case.

When it comes to anything electrical, the fewer the features, the smaller the chance of anything going wrong. In this case, the ECEEN solar charger features no additional bells and whistles, just a canvas cover protecting the solar panels from damage when folded. It’s proof that simplicity can be the greatest feature of all. 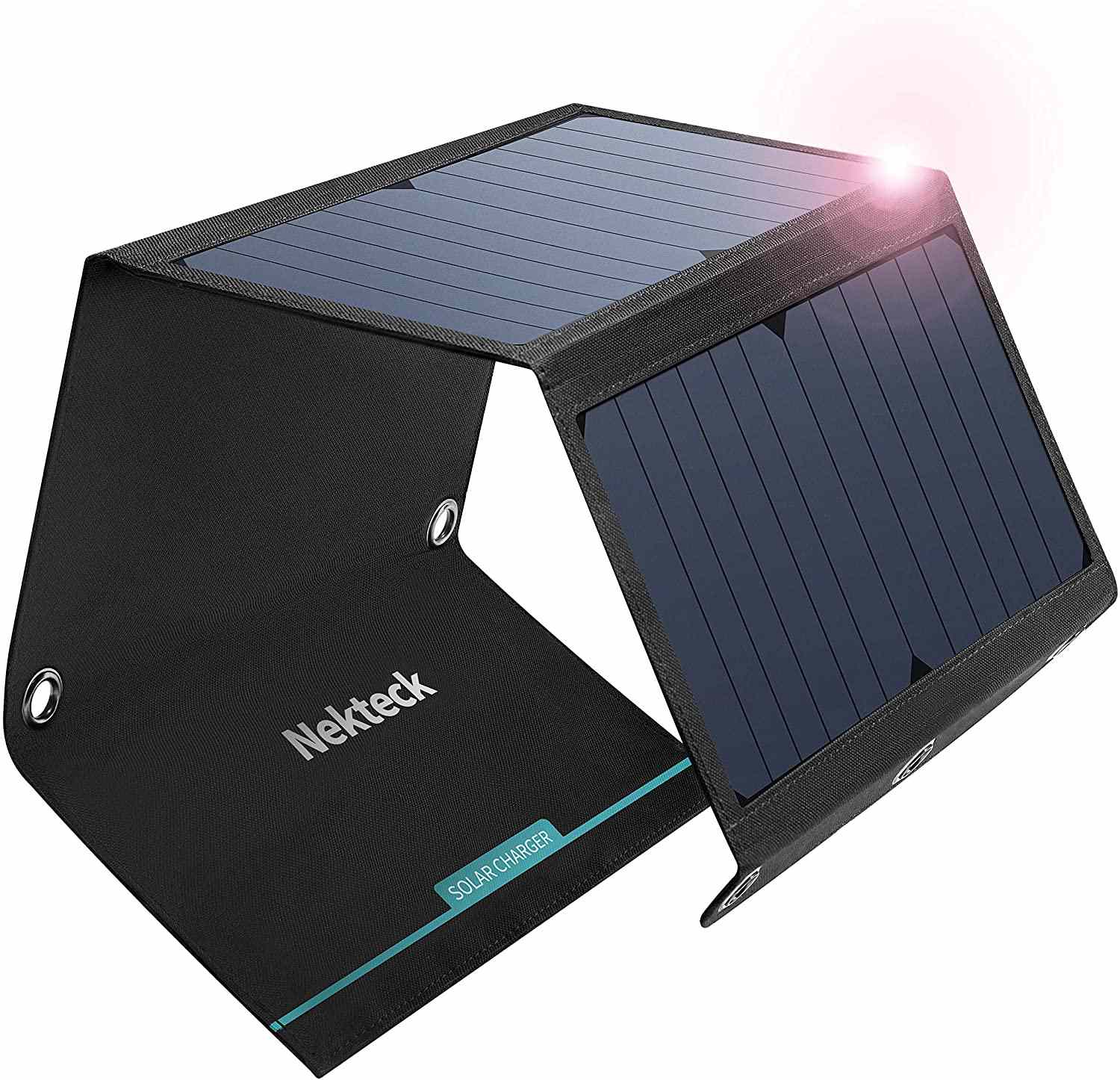 While heading out into the backcountry is a way of disconnecting, having access to your phone for navigating or in case something goes wrong is invaluable. Solar panel chargers can be bulky and heavy as a rule, which is why this 18 ounce choice from Nekteck is such an unexpected alternative.

With a panel size of 21 watts across three, high-efficiency solar panels, its fast, 3-amp capacity should make short work of replenishing your battery. Bungee loops that are sewn into the canvas cover also allow you to attach this easily to your backpack for sunlight charging as you hike. Combine it with a battery pack, which you can charge during the day and subsequently use to charge your phone and other devices at night, for the most efficient charging.

The Best Reusable Water Bottles of 2022, According to Our Tests 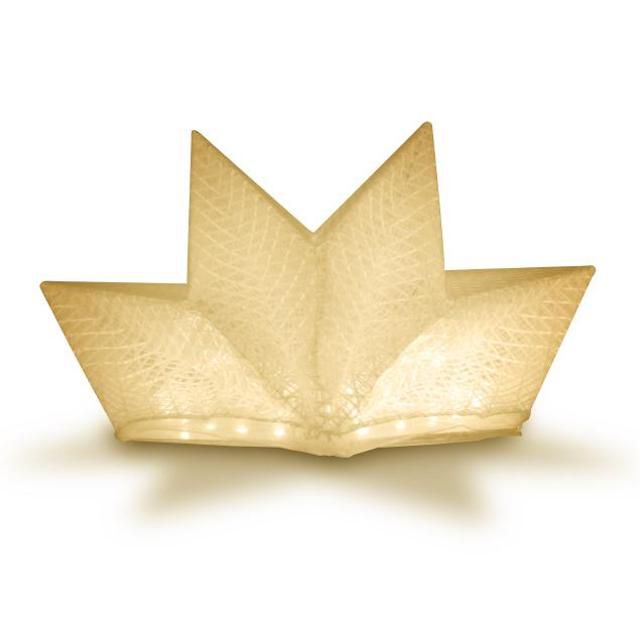 View On Amazon View On Solight-design.com

Solar-powered phone chargers don’t have to prioritize functionality over design — at least not in the case of the QWNN solar lantern from pioneering solar light company Solight. Inspired by origami, this ingenious light design made from recyclable PET sailcloth takes the form of a beautiful half star shape that emits light, as well as being able to charge smart devices within two to four hours through its USB port. What’s more, it can be folded flat for ease of transportation.

Two small, 1.8-watt solar panels take up to ten hours to charge but offer a remarkable 40 hours of continuous light in return. At nearly one pound, it’s not the lightest charger available but, by offering dual functionality, it’s guaranteed to have plenty of use on your next trip into the outdoors. 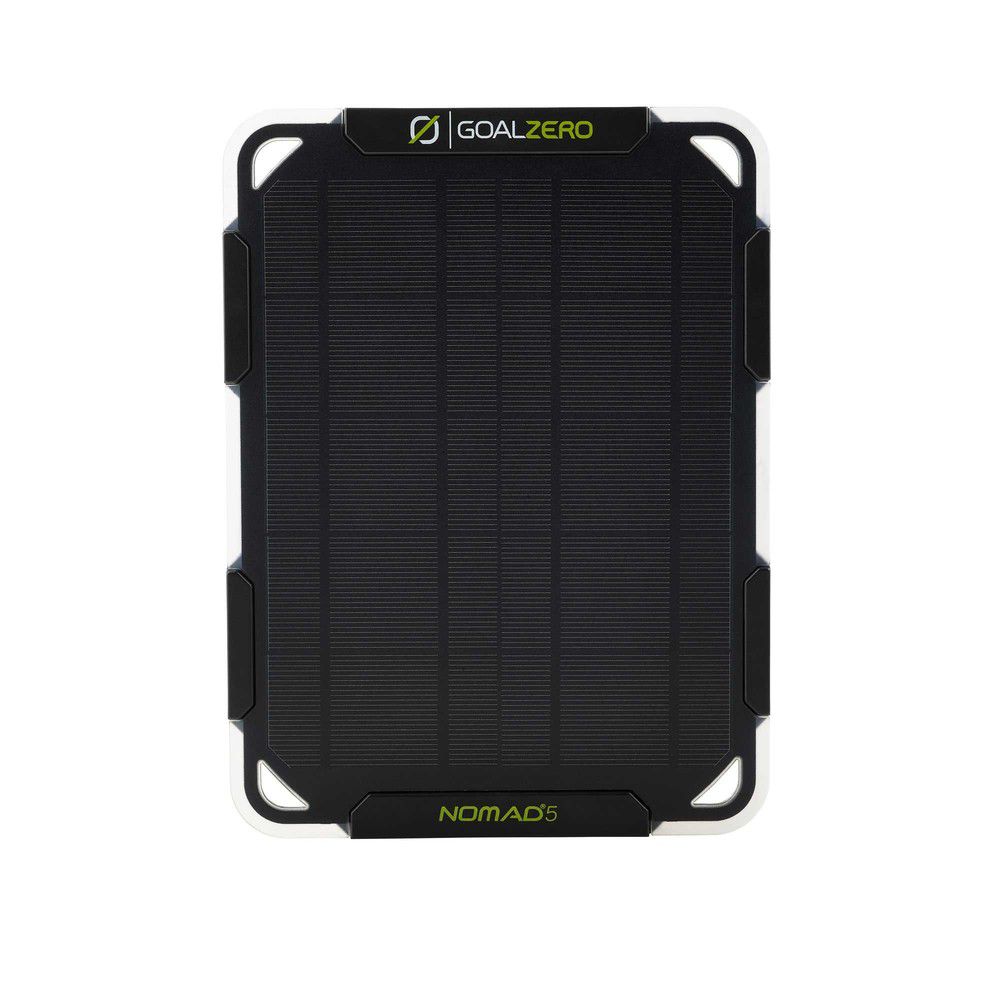 Engineered from hard-wearing monocrystalline, the 5-watt solar panel on the Goal Zero Nomad 5 might not look like much. But strapped to the top of your rucksack or positioned in front of the sun using its built-in kickstand, it’ll harness the energy you need for your devices.

A one-year warranty is an added bonus for this charger, which weighs in at a reasonable 0.79 pounds, making it not too substantial an addition to any backcountry adventure. Thanks to the simplicity of the design, there’s very little to go wrong here — which should guarantee its long and happy life. For best results, combine with a portable battery pack for easy energy storage when you need it the most.

The Best Rechargeable Flashlights For Emergencies and Every Day 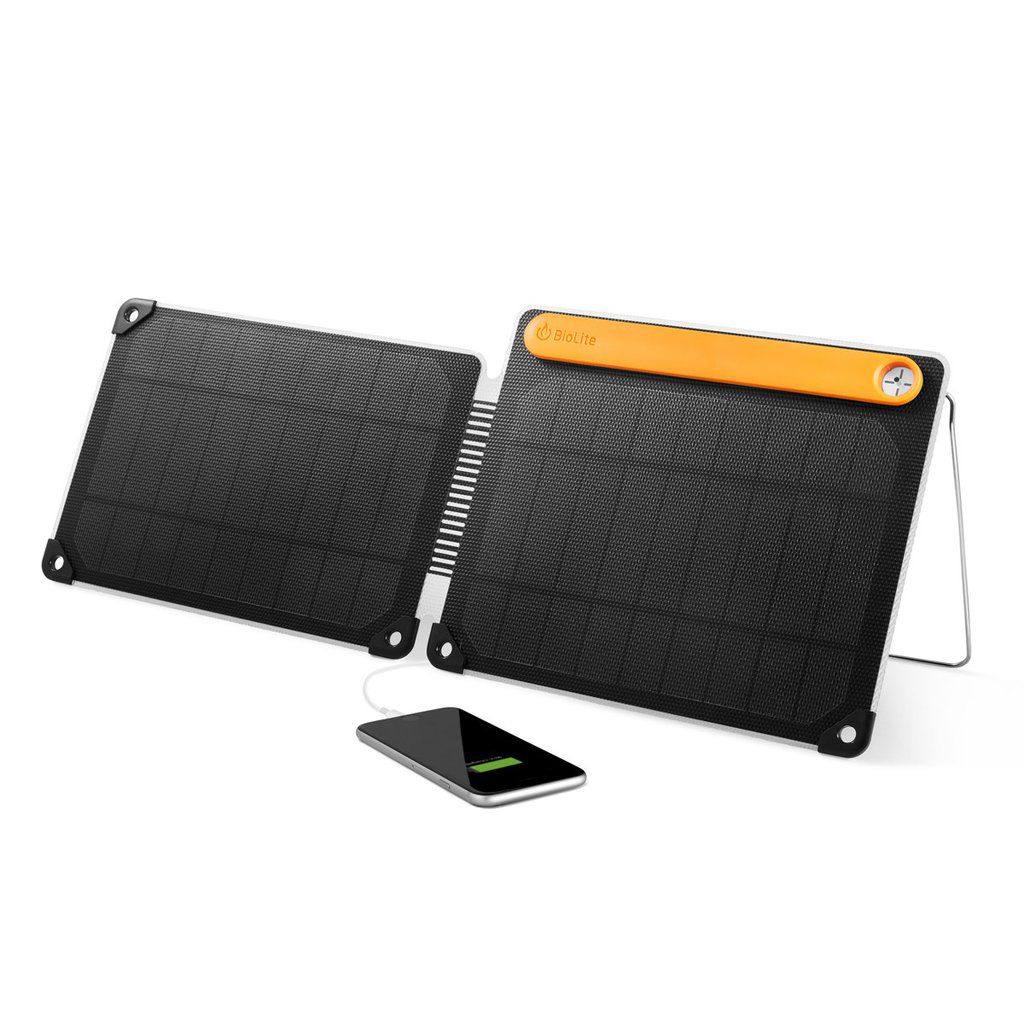 View On REI View On Amazon

If you’re looking for a sturdy design that can be propped up beside your camp and left to its own devices, this is the choice for you. The Biolite SolarPanel 10+ has two, 10-watt, monocrystalline solar panels with a kickstand to keep it securely in place when assembled. An in-built 3,200 mAh battery is fully charged within two hours and can be used to charge your devices whenever they need it.

Built for durability, you can expect this charger to last for many years. At 1.2 pounds, it’s also a fairly lightweight choice. Even better, the company offers a warranty program in the event you find fault with your device.

If you’re anticipating using your charger in anything but sunny conditions, the Big Blue 28 W Solar Charger (view at Amazon), with its auto-restart feature, means it won’t miss a beat when it comes to charging, even if the sun disappears behind a cloud for a moment or two.

For efficient charging, even after sundown, opt for panels that come with their own battery pack, like the BioLite SolarPanel 10+ (view on REI).

What to Look for in a Solar Power Charger

Not all solar power chargers are designed for backpacking, with many of the devices too heavy to be used for anything more than car camping, where weight isn’t of the essence. Those with in-built battery packs tend to be heavier but more convenient, while the size and number of solar panels attached to the device typically result in a faster-charging speed because of the larger surface area for absorbing energy from the sun, but again, these will add bulk to the device.

Solar power chargers are rarely known for the speed of their charging power, with many taking up to and over 10 hours to reach full charge. For this reason, it’s important to note the wattage of the solar panels; the higher this number is, the quicker your devices will be returned to full power.

Opting for a solar power charger that has an inbuilt battery pack is generally more efficient than buying one without, as this means you can charge up the pack during the day and recharge your devices from it at night. Note that the capacity of the battery pack (mAh) determines how many times you can charge your devices, so choose a larger size if you’re going to be away from reliable electricity sources for longer periods.

Various other features can enhance the performance of your solar power chargers. One of the most crucial is the auto-restart functionality available on some devices, which prevents charging interruption when it clouds over. Cheaper devices that lack this feature take longer to charge, as every time the charger stops, the connected device has to be reconnected to begin again. This wastes time and energy and requires you to be constantly alert to whether the device is working.

Additionally, buying a solar power charger with bungee loops so you can attach it to your backpack while you’re hiking is useful and you’ll want one with a built-in cover to help protect the solar panels from scratches.

How do I use a solar phone charger?

Solar phone chargers are extremely easy to use. Just open up the device, uncover and place the solar panels in a sunny spot, and connect your phone. Charging should begin immediately as the device converts the solar energy from the sun into electricity that is then stored in your phone.

Can I take a solar phone charger on an airplane?

Yes, taking most solar phone chargers on an airplane should be no issue and can be packed in checked or carry-on luggage. However, if it contains a battery pack (typically a lithium-ion battery) built into the charger, it needs to go into your carry-on bag to comply with federal aviation authority guidelines.

If your solar phone charger contains an internal lithium-ion battery that exceeds 100 watts, it isn’t allowed onto the plane.

How fast can a portable solar charger charge my phone?

Many factors affect how quickly your portable solar charger will charge up your phone or other devices. Solar power chargers are most efficient when charged in direct sunlight, so if you’re moving around with one strapped to your backpack then the speed will be slower because you’ll likely be alternating between direct sunlight and shady, indirect light. High temperatures can also lower the performance of the charger, so charging earlier in the day when light is strong but temperatures are lower can result in faster speeds.

In strong, direct sunlight, your phone can be charged in as little as three hours, as long as there is no cloud cover or anything else that interferes with charging. An even faster way of charging your phone is to use the solar panel charger to charge up a battery pack and then use that power up your phone.

With extensive backcountry experience in both her home country of the UK and across some of the remotest parts of South America, Steph Dyson has had plenty of time to work out which solar energy devices are worth the price tag. Having put plenty through their paces, she knows which can be relied upon when you need them the most.