The 7 Best Solar-Powered Generators of 2023

Our top pick is the Yeti 1500X Portable Power Station. However, if you want a smaller, less expensive option, consider the Jackery Explorer 500W.

It’s always good to have a backup in life, especially when the power goes out. Gas-powered generators can do the trick, but they’re loud, emit smelly fumes, and require a place for storing gasoline safely. They also contribute to climate change.

Solar generators, on the other hand, are clean, easy to use, don't require fossil fuels, and are becoming more and more affordable as solar technology improves. They can be particularly useful in emergency situations where other fuel supplies are cut off or difficult to access. Solar generators typically capture the sun’s energy via stationary or portable solar panels that are sold separately, convert it into electrical power, and store it in a battery for later use.

What’s the best generator for you? First, estimate how much power you need to run appliances, laptops, and televisions in your home should a power outage occur or for whatever you’ll need to power up while you’re camping, living off the grid, or traveling in an RV.

Once you know how many watts you’ll need; consider the other features you want such as USB charging ports and rechargeable batteries. You can avoid blowing your budget by selecting a generator with features that make the unit more efficient rather than more expensive.

We researched the market to recommend the best generators that are compatible with solar panels. 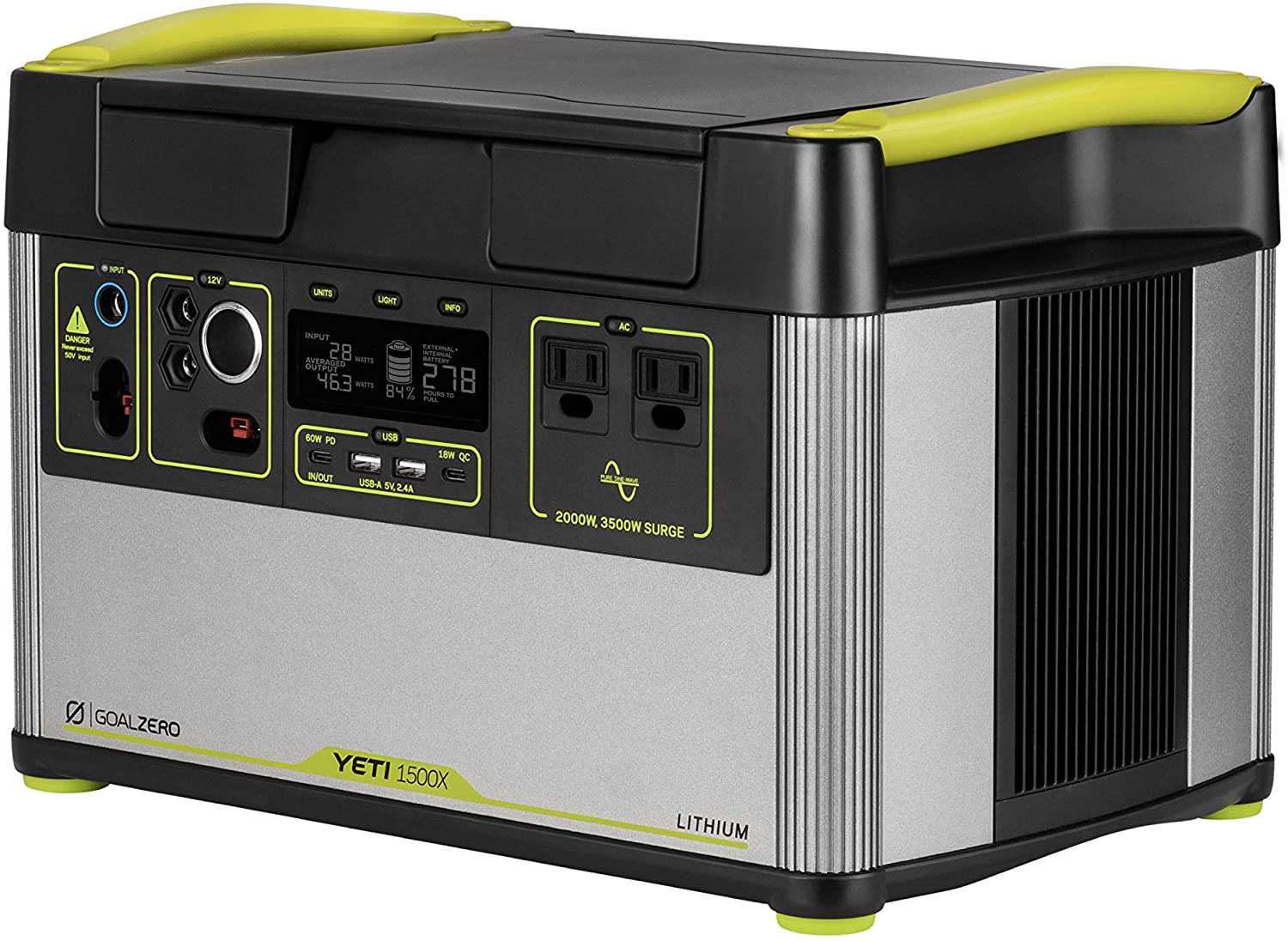 View On Amazon View On Basspro.com View On Cabelas.com

Need to power your laptop, phone, power drill, coffee maker, and refrigerator all at once? The Goal Zero Yeti 1500x is a high-capacity power station that supplies electricity with the touch of a button or the Yeti 3.0 app. Weighing in at 43 pounds, it’s a solar option for those living the van life or to provide back-up energy when power lines go down.

The lithium battery supplies 1500-watt hours, so you can charge your phone a hundred times or run a refrigerator for up to a day. Its industry-leading 2000-watt AC inverter is one of the most powerful on the market, making it our top overall pick. The integrated MPPT charge controller increases efficiency by 30% when recharged with a compatible Goal Zero solar panel. Everything is backed by a two year warranty. 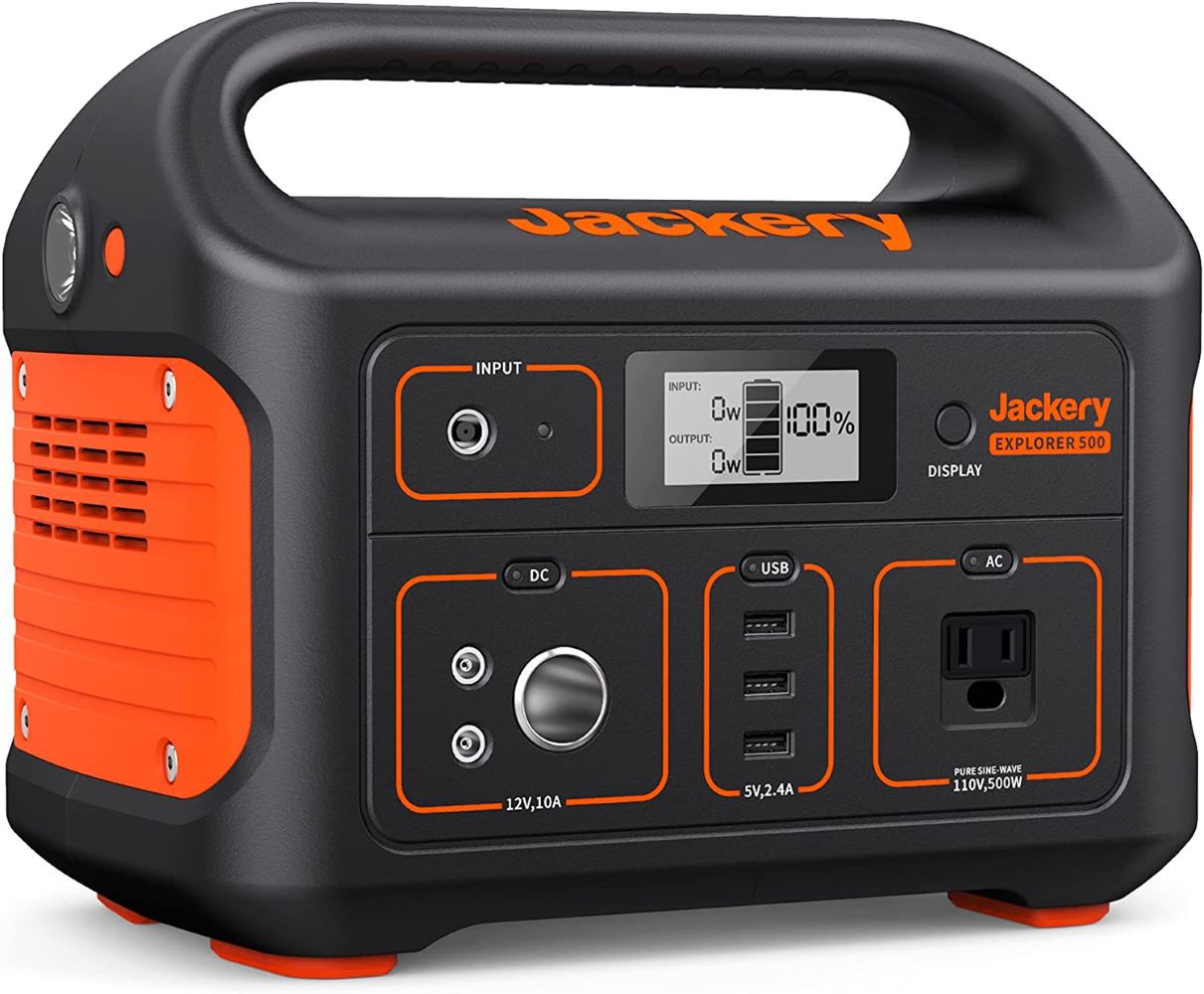 View On Amazon View On Jackery.com

Weighing in at a relatively light 13.3 pounds, the compact, durable, and affordable Jackery Explorer 500 lets you take solar-powered electricity along on every adventure. The 500-watt inverter provides enough juice for charging multiple devices in any either of the AC or DC ports or one of the three USB ports.

It comes with a car charging cable and an AC adaptor. Like many of the solar generators in the Jackery family, the unit can be recharged from an AC wall outlet or with a Jackery SolarSaga solar panel (sold separately). The 518-watt rechargeable battery will need replacing after about 500 uses, but that’s after a lot of camping trips. 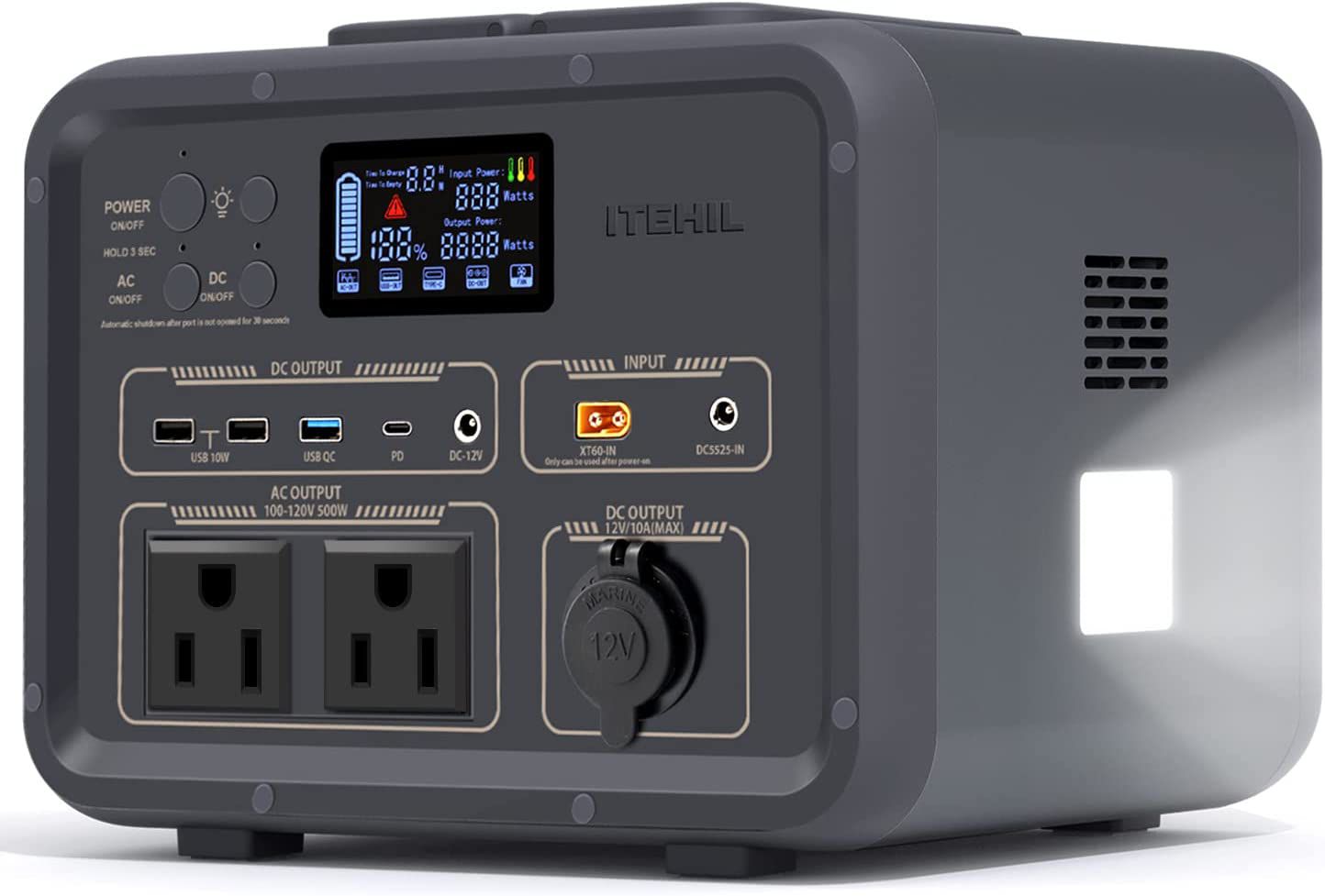 View On Amazon View On Itehil.com
Be Prepared for Emergencies With an ITEHIL Power Station

If you’re looking for a source of backup power that’s cleaner than a diesel generator, the ITEHIL power station is an excellent option. With high-speed charging, you can get your devices back up and running when the power goes out, as well as a built-in light. You can charge it via solar panels (ITEHIL separately sells panels that fold into a suit-case style envelope), a car charger, or a wall plug. There are both U.S. and international AC plug versions of the device.

At nearly 19 pounds, it’s heavier than our Best Portable pick, but is still light enough to be moved around fairly easily, and has built-in handles. Our tester notes that it’s not big enough to power most full-size refrigerators, but could power a small electric cooler. It has an intuitive display that shows how much battery capacity is remaining.

“It seems to be well-designed for safety, and includes warnings like ‘do not stick fingers directly into the power port.’” ~ Lloyd Alter, Treehugger Design Editor 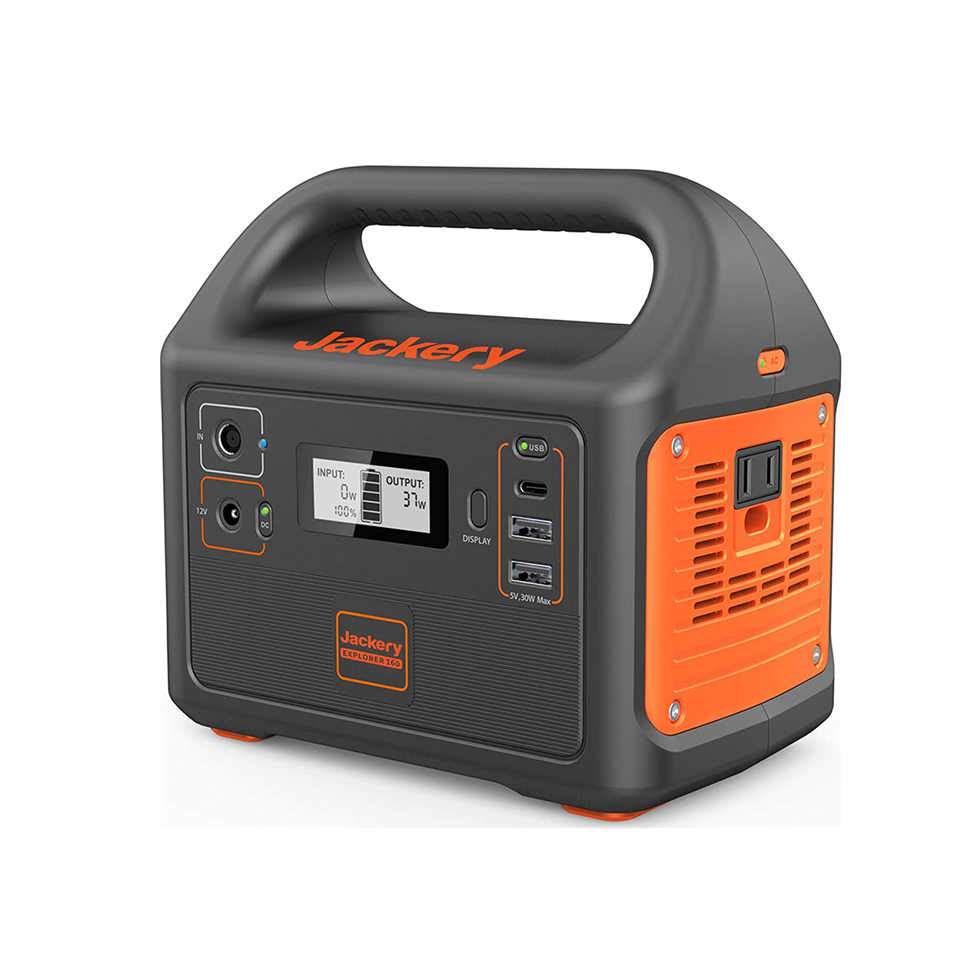 View On Amazon View On Jackery.com

While many of the budget generators still cost over $200, this affordable option from Jackery comes in at under $150 and has a two-year warranty. It’s also one of the lightest option on the market at just under 4 pounds, making it another great pick for camping or even backpacking.

It can be charged using a solar panel, wall outlet, car outlet or electric generator. It’s great for charging your phone or camera, or running small appliances like a fan or laptop. It has a surge capacity of 150 watts, but you should avoid using it with any device that has a 100 watt or higher rating. 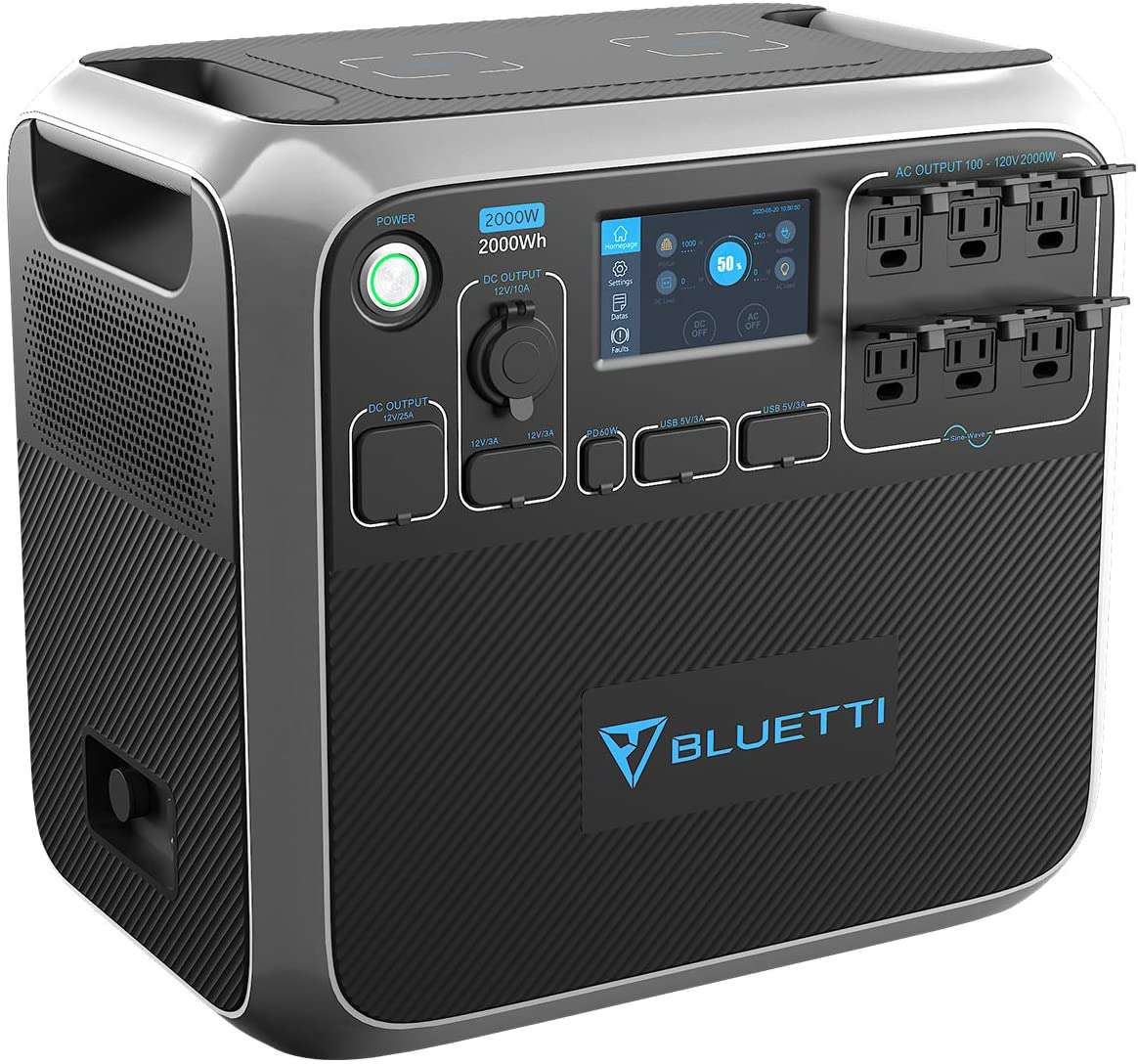 View On Amazon View On Bluettipower.com

With just as many watts as our Best Overall pick, the Bluetti 2000W Portable Power Station can be charged five different ways and has 17 different output ports, each of which is covered by a high-quality dust cap. You can charge it using solar panels (not included), a via a wall outlet, car plug, using a generator, or lead acid battery.

You can hook up a number of smaller devices, at the same time, like a laptop, camera charger and several phones. Or you can use it as back-up power for larger appliances—according to the manufacturer, you can power an 800 watt wall refrigerator with this power station for over two hours.

A nice feature is the LED touch screen, which can tell you how much energy you’re drawing down and how much battery charge is remaining. You can also set it to an Eco mode, which will shut the device down if it senses you’re not using it after several hours. It has rubberized feet, so the unit won’t slip around on smooth surfaces. It’s also quite heavy so it’s not ideal for camping situations where you’d need to carry it, but it is compact enough to fit into a car trunk. 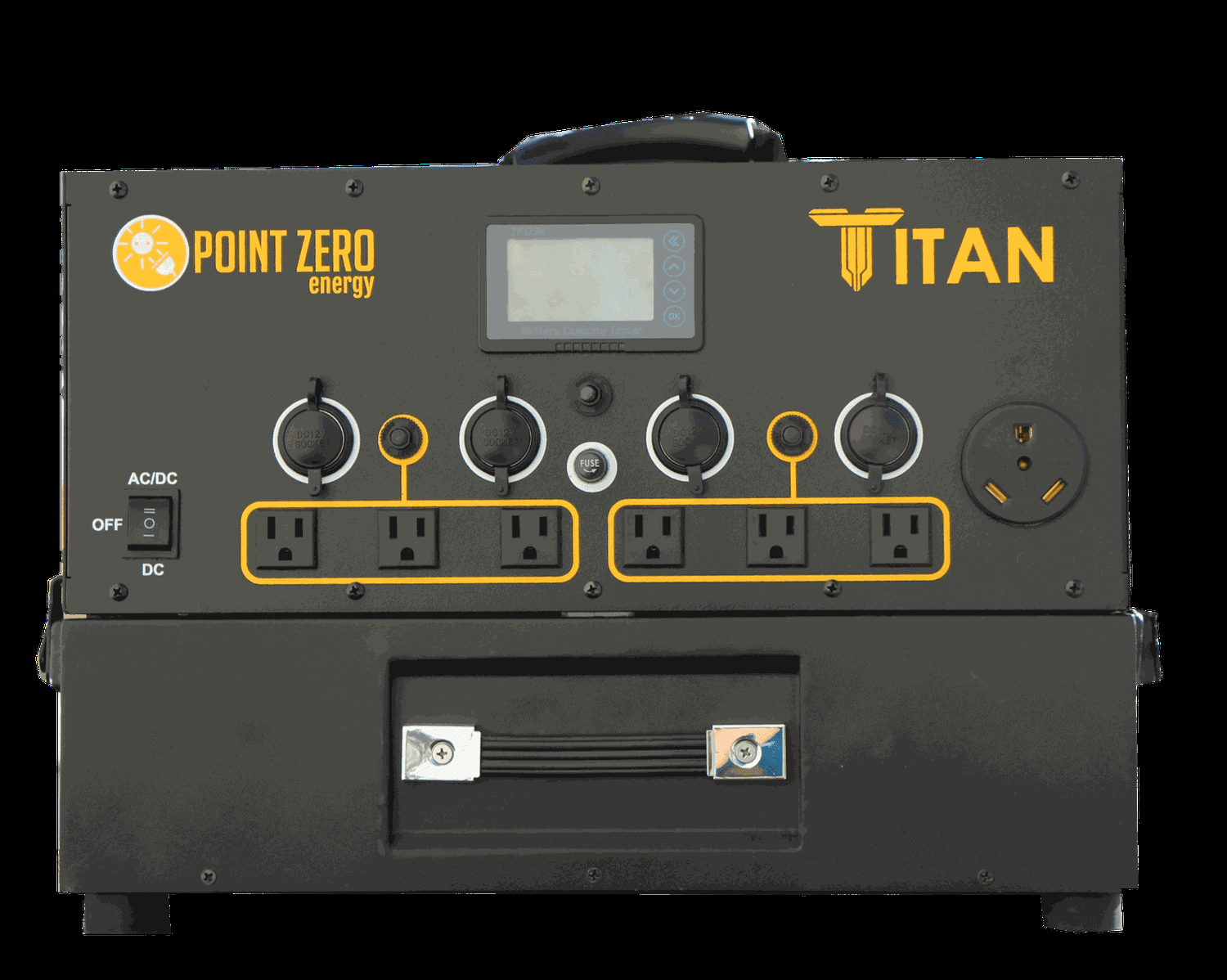 True to its name, the Titan is packed with power. Its 3000-watt inverter has enormous output capacity for powering up household appliances like refrigerators and portable AC units with ease. Are you in heavy cloud cover? No problem. The Titan includes a stackable battery bank, which can be combined with additional batteries (sold separately). You can recharge the generator via solar panels, an AC outlet, or a DC car charger.

In addition to extra batteries, you can also add on USB adaptors or a car charger. THE MPPT charge controllers allow it to reach full battery capacity in about four hours making the Titan a versatile, efficient, and reliable backup plan. 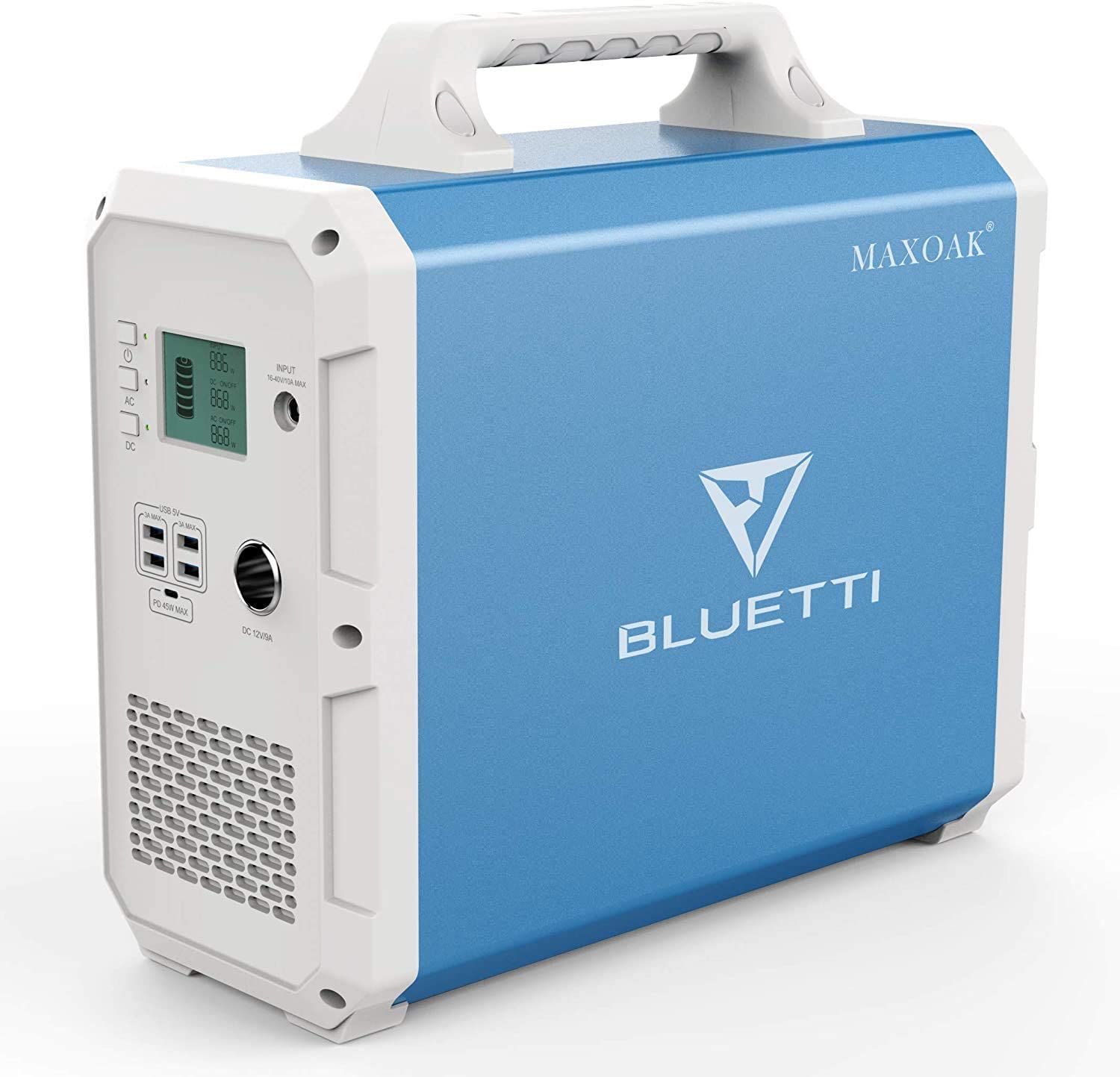 During extreme weather events, generators like the ones on this list can sell out quickly. So, if other options aren't available, there's a lot we like about this one. The Bluetti stores plenty of power at an affordable price. It’s 1500-watt-hour lithium-ion battery is quick-charging and ample for powering up most home appliances during a blackout.

While it serves as a great home power supply during an emergency, the MaxOak Bluetti is also portable enough take along on fishing or a road trip. It includes two AC ports and five USB outlets and a 12-volt DC outlet that can handle a mini-fridge. There’s also a nifty LCD display to help you track the generator’s performance.

If you’re looking for something high powered to help you weather a storm, the Yeti 1500X Portable Power Station is our top choice. If you need something portable for a camping trip, then the Jackery 500W might be your best new travel buddy.

What To Look for in a Solar Generator

When deciding what solar powered generator is right for you, consider which types of appliances, tools, and devices you need to charge and how often you’ll be without a traditional power source. Here are some other tips to help guide your decision-making.

There are three common types of solar panels—monocrystalline panels, polycrystalline solar cells, and thin film, or amorphous crystal panels. They each offer different efficiency levels. Monocrystalline panels are most common and slightly more efficient than polycrystalline cells. Thin film panels are a newer technology and are light, flexible, durable, and more affordable than the others, but about half as efficient as the other types. Sometimes they’re included with the generator and sometimes they’re sold separately.

Solar generators run on stored energy so you’ll want to consider the battery’s capacity (the total amount of electricity stored). You’ll also want to know the power rating (how much power is delivered at a time). A battery with a high capacity, but low power rating typically delivers less electricity for a longer period of time.

Lead-acid and lithium-ion are the most common options. Lead acid are used to power things like automobiles, while lithium-ion options are often used to run power tools. They’re increasingly used in solar-powered generators because they’re lightweight. While they tend to be more expensive than lead-acid varieties, they typically have a longer lifespan which saves money on replacement batteries and keeps them out of landfills.

In order to regulate the current between the solar panels and the battery, the simplest controllers cut the power when maximum voltage is reached. This isn’t as efficient as models that use three- power point tracking (MPPT).

Converting direct current (DC) from solar panels to alternating current (AC), inverters carry a watt rating to show the maximum output of power they can generate. Pure sine wave inverters are more expensive, but more efficient. But they’re not necessarily a cost-effective option if you only plan on using the generator occasionally.

Will you be using your solar generator in your home or on the go? For portability, look for units that are easier to carry and maneuver, and that house parts in a sturdy box rather than as separate pieces.

Note the presence of multiple USB ports and AC outlets, replaceable batteries, and LED panels that help you monitor your system when it’s dark. Finally, consider the length of a unit's warranty, or any other manufacturer grantees.

Treehugger is committed to helping our readers transition away from fossil fuels, and we deeply researched the market to find the best generators compatible with solar panels.

A travel and adventure writer for many years, author Heidi Wachter knows how handy the sun’s rays can be for keeping her phone and camera charged.