Amber Nolan
Amber Nolan is a freelance writer for Treehugger who is passionate about sustainable living, nature, and outdoor adventure.
Learn about our editorial process
Fact checked by
Elizabeth MacLennan

There’s nothing quite like a relaxing, hot shower after a long day’s work. However, as incredible as it feels, it’s also costly — both on the environment and on the wallet. The EPA estimates that for the average family, showers account for nearly 17% of indoor water use, that’s nearly 40 gallons per day. Installing a low-flow shower head can help reduce water consumption, and in turn, help save on energy and water bills.

While many shower head manufacturers advertise “low-flow” products, they are, in fact, producing the standard maximum flow rate of 2.5 gallons per minute (GPM) set by the Energy Policy Act in 1992. Today, many states such as Colorado, California, and Vermont have already put into effect requirements that set the flow rate even lower — a trend that’s likely to continue. To meet demands, companies are producing a variety of truly “low-flow,” shower heads, giving more water-efficient choices to eco-conscious consumers. 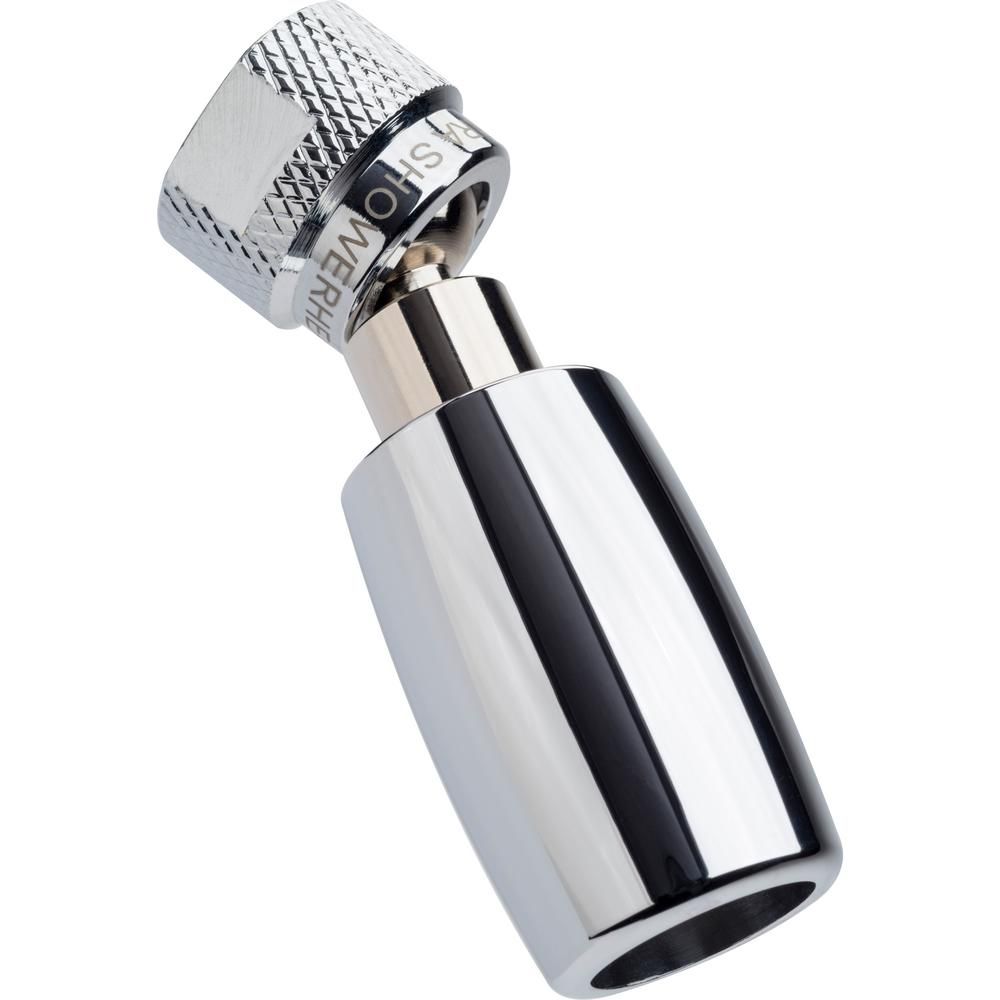 View On Walmart View On Amazon

Affordable yet built to last, the family-owned High Sierra shower heads has set itself apart and was recognized by the EPA with the WaterSense Excellence Award for Strategic Collaboration (2016). The sturdy, solid metal shower head provides a strong spray, a swivel to adjust direction, and a trickle option button that allows more water conservation when lathering.

It’s also specially designed with larger flow passageways, so it will not clog or require added cleaning. In addition to being WaterSense-certified, High Sierra is compliant with the Buy American Act. The shower head is available in chrome, nickel, oil-rubbed bronze, and polished brass and has flow-rate options of 1.5, 1.8, or 2.0 GPM.

To earn a WaterSense label, the EPA requires that shower heads must demonstrate they use no more than 2.0 GPM. The EPA estimates that “if every home in the United States installed WaterSense-labeled shower heads, we could save more than $2.9 billion in water utility bills and more than 260 billion gallons of water annually." 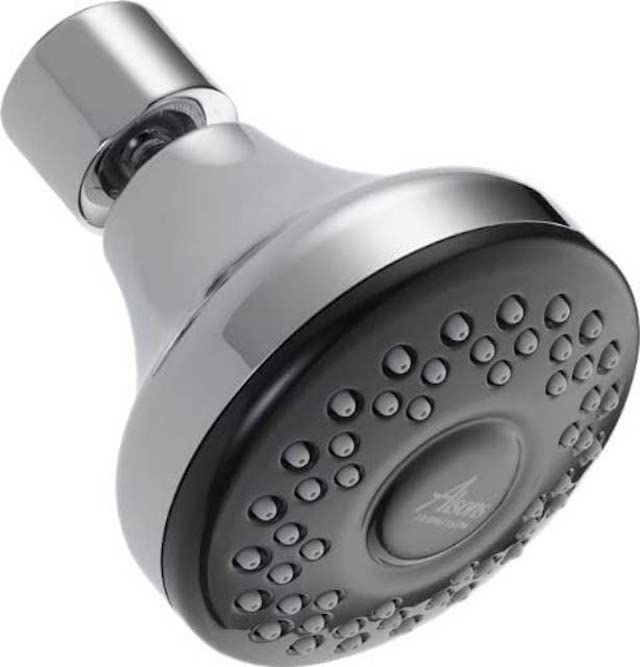 View On Amazon View On Wayfair View On Build.com

If you want to try a water-saving shower head but are looking for something affordable yet effective, Delta Fundamentals Single-Setting Showerhead (52672-15-BG) ticks all the right boxes. WaterSense-labeled, this fixed, round shower head produces a flow rate of 1.5 GPM and quickly pays for itself in reduced water bills.

There are no bells and whistles with this Delta — it has a simple, one-setting design that allows for a full-body spray. It's available in chrome or white and is also certified by the California Energy Commission (CEC). 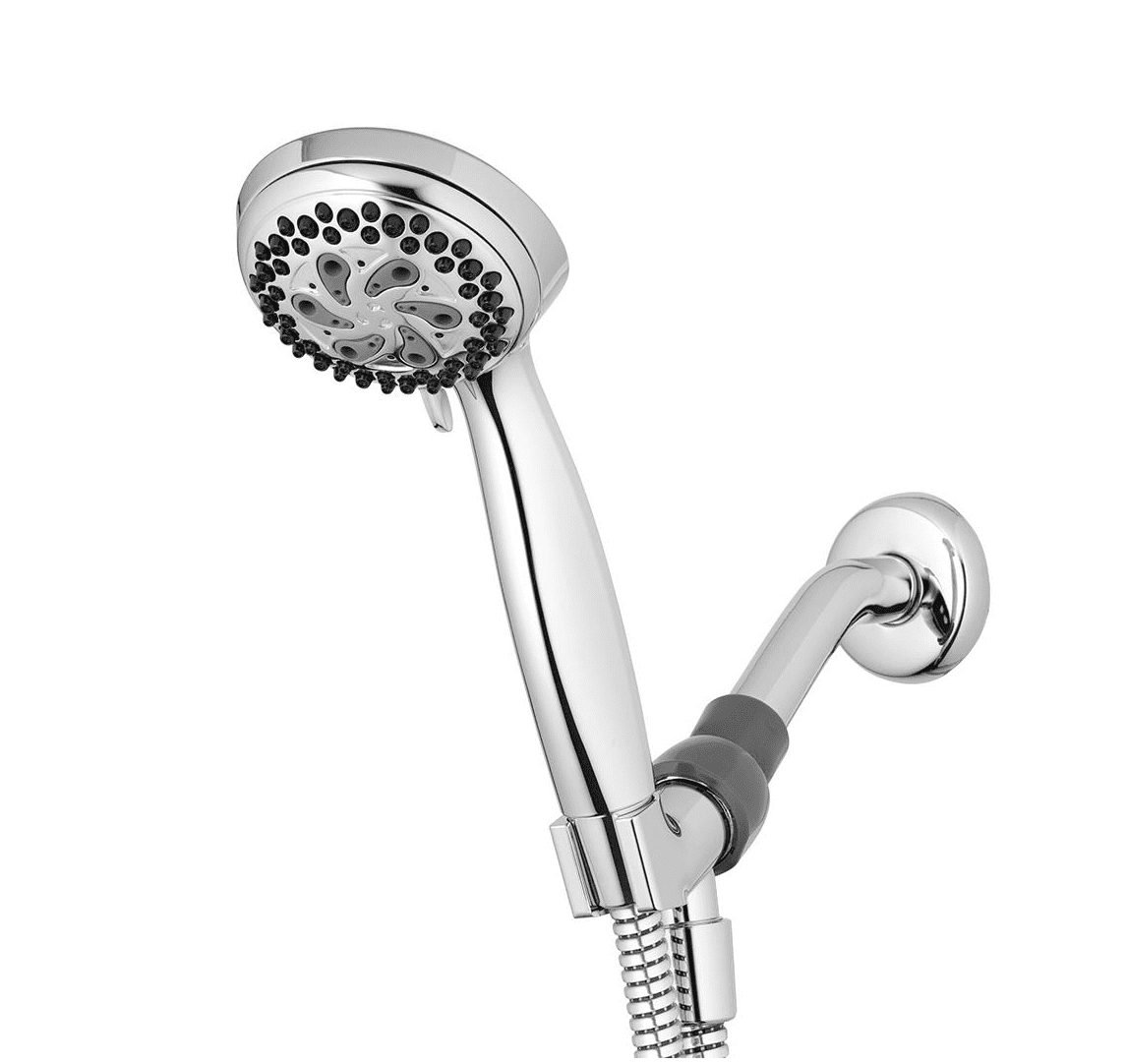 Many low-flow shower heads are fixed in place, but if you’re looking for the convenience of a handheld shower head, check out the Waterpik EcoFlow. The handheld comes complete with six different spray settings such as pulsating massage, full-body, Champagne, and water-saving trickle.

The Waterpik has a flow rate of just 1.8 GPM, translating to an estimated savings of $45 per year on the water and energy bill for a one-person household. The shower head features a chrome finish, anti-clog nozzles, and an ample, 5-foot hose for extended reach. The EcoFlow is reasonably priced, easy to install (less than 10 minutes), and is WaterSense-certified.

View On Amazon View On Wayfair

TOTO is known for its high-end and high-tech bathroom fixtures. If you’re willing to splurge, this innovative shower head offers a wavy, pulsing spray called “comfort wave,” which promises a more stimulating shower experience. It has a wide, flat look that’s sleek and minimal. A simple button allows you to change settings one-handed. This shower head is available in three finishes: brushed chrome, polished nickel, and polished nickel.

Just be sure to select the 1.75 GPM version, as TOTO also sells a less-efficient 2.5 GPM version of this design. We also like that it’s WaterSense certified and backed by a limited lifetime warranty. 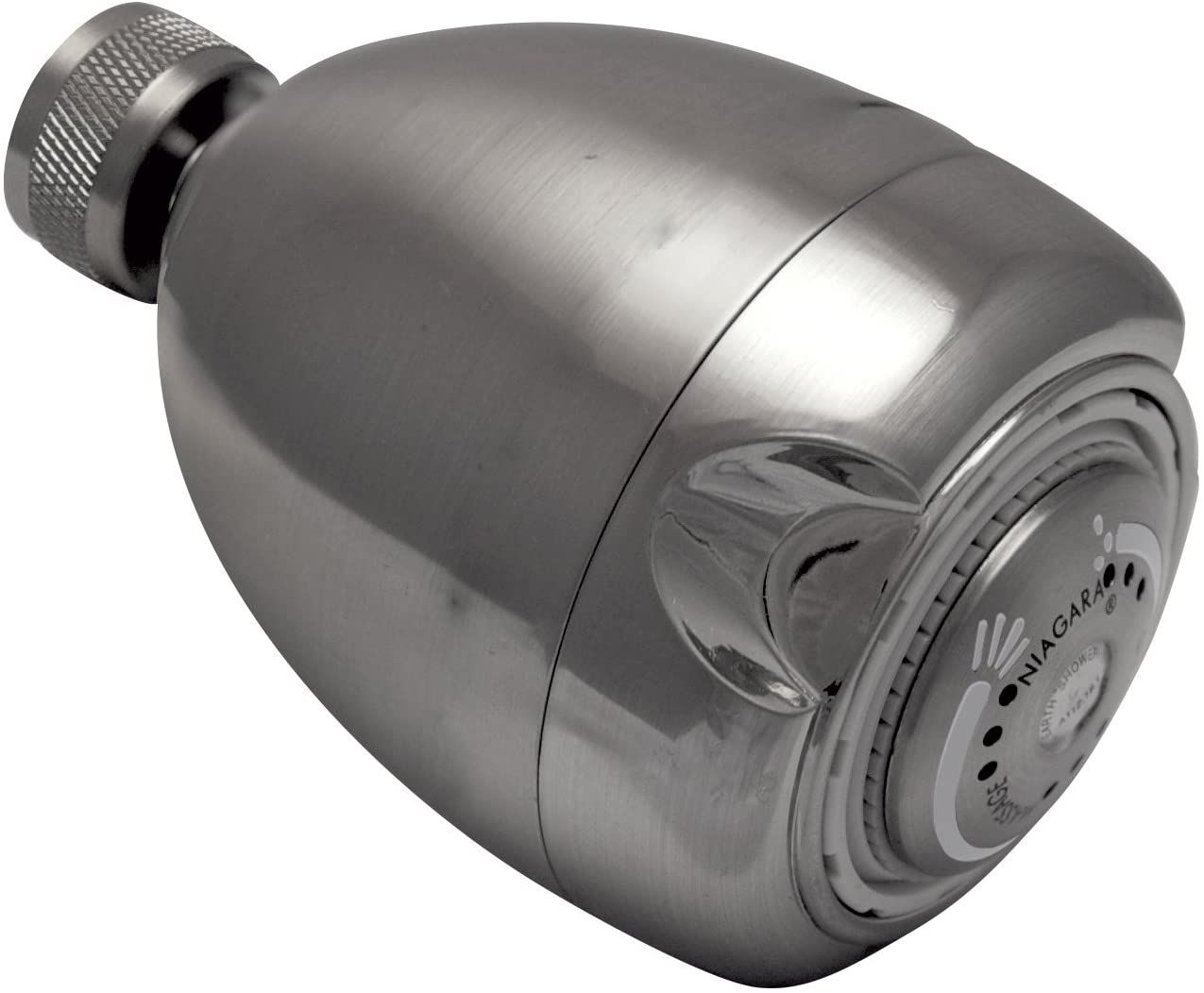 How much pressure a shower head produces is largely determined by the amount of pressure available in the water system in the home. However, the WaterSense-listed Earth Showerhead (N2915BN) does an excellent job regulating this pressure, and the result is a consistent, smooth amount of water (while still keeping the flow rate to just 1.5 GPM).

The non-aerated stream also helps to maintain temperature, so there is less energy loss (and in turn, fewer costs). The Earth Showerhead features nine different massage jet settings and three adjustable water-stream settings: needle, massage, and combination. Plus, installation is quick and painless. The price is affordable, and the brushed nickel finish adds a sleek look, and other finishes are also available. 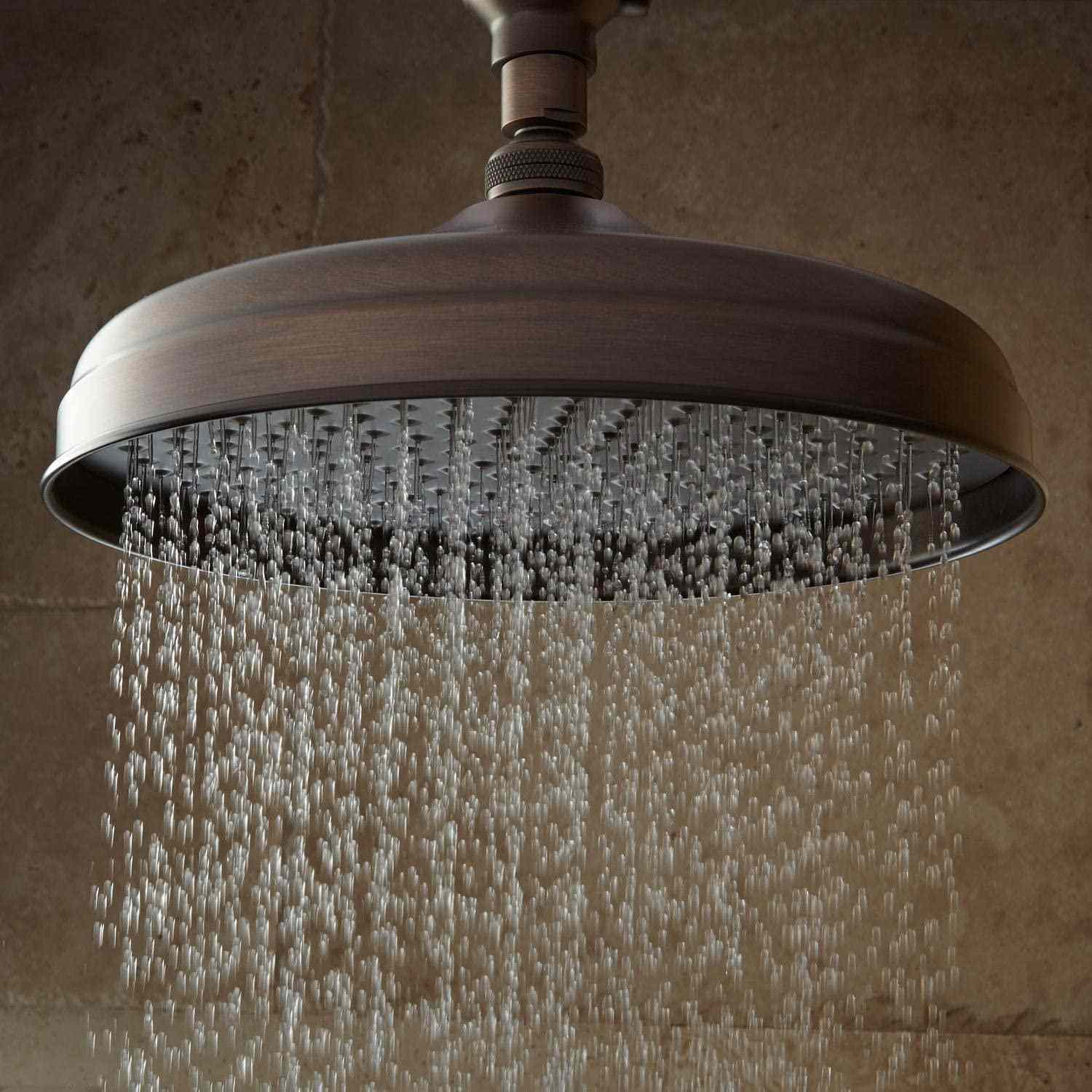 There are a variety of shower heads that simulate a soothing rainfall by offering a wider surface area and gentle water flow (instead of a high-pressured, direct stream). However, few manufacturers offer this design with truly low-flow output (less than 2.5 GPM).

The Lambert Rainfall Shower Head by Signature Hardware stands out in that the 10-inch shower head is wider than some competitors while still maintaining a flow rate of 1.8 GPM. Made from brass and finished in either brushed nickel, chrome, or bronze, this aesthetically pleasing shower head is mounted to the ceiling to re-create the sense of being in the rain—without as much water falling.

If you can’t choose between a fixed shower head or a handheld, you can always have both. The Oasis Shower System by PULSE is loaded with options: There’s five settings on the shower head and six on the handheld including wide spray, jet, and a combination.

The system has a flow rate of 1.8 GPM (during regular use) plus a water-saving trickle option for additional conservation. While many shower heads are positioned at an angle, the PULSE ShowerSpas flows down directly on the bather and can be used at the same time with the handheld or separately. 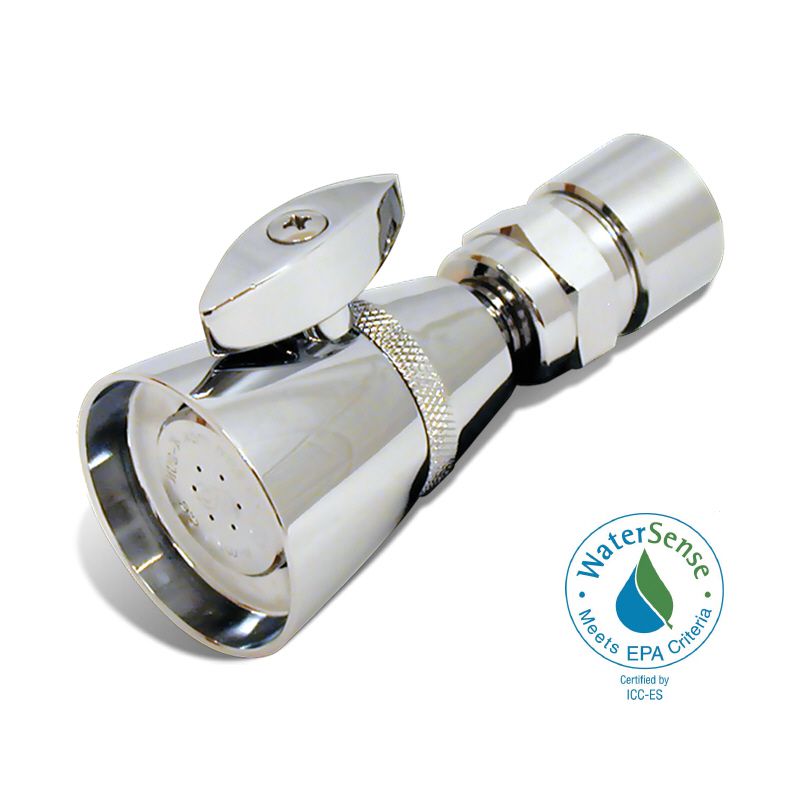 For those who live in a mobile home, RV, tiny house, or boat with limited access to water, the Bricor Ultramax is an excellent choice. The innovative, WaterSense-certified shower head sets the bar with an unheard of standard flow rate of 0.625 GPM. This rate is one of the lowest in the industry, yet it still maintains the feel of a consistent stream of water.

Constructed from solid brass, the durable shower head is moderately priced but will save consumers more in the long run. Keep in mind that due to the drastic water-saving efficiency, this shower head is ideal for those seeking an adequate — but not luxurious — shower experience. 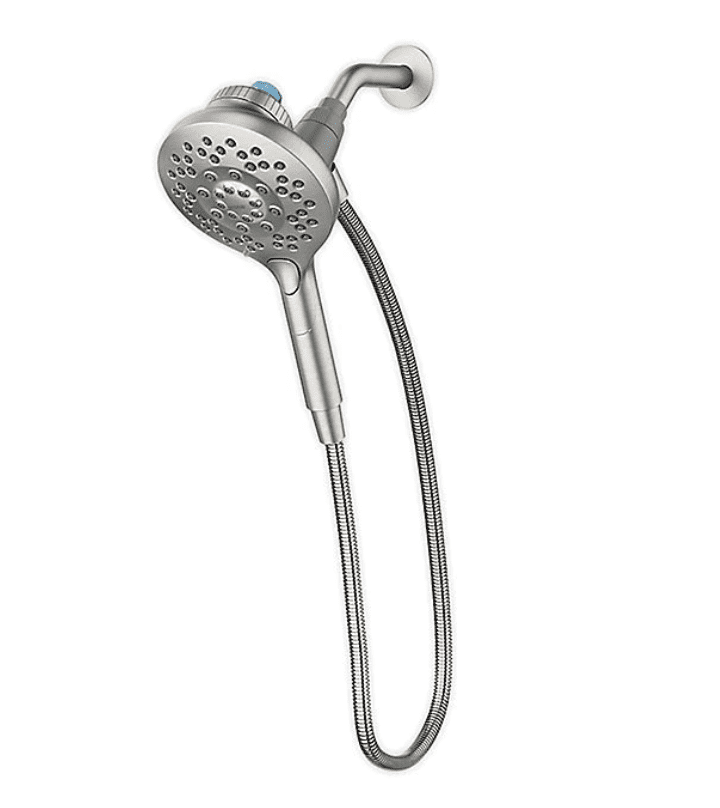 View On Walmart View On Amazon View On Wayfair

For a refreshing, spa-like feeling without leaving home, the Moen Aromatherapy Handshower is a worthy splurge that transforms the shower into a calming, Zen-like experience. This innovative, handheld design releases essential oils into the shower stream, and the level of aromatherapy can be adjusted on the infusion dial.

The scented oils range from lavender and tea tree to vanilla and lemon, plus, with a flow rate of 1.75 GPM, the luxurious shower can be enjoyed guilt-free. It’s worth noting that only three aromatherapy pods are included, but additional capsules can be purchased separately. The WaterSense-certified shower head also has six unique pulse settings, a magnetic dock, and a chrome finish. 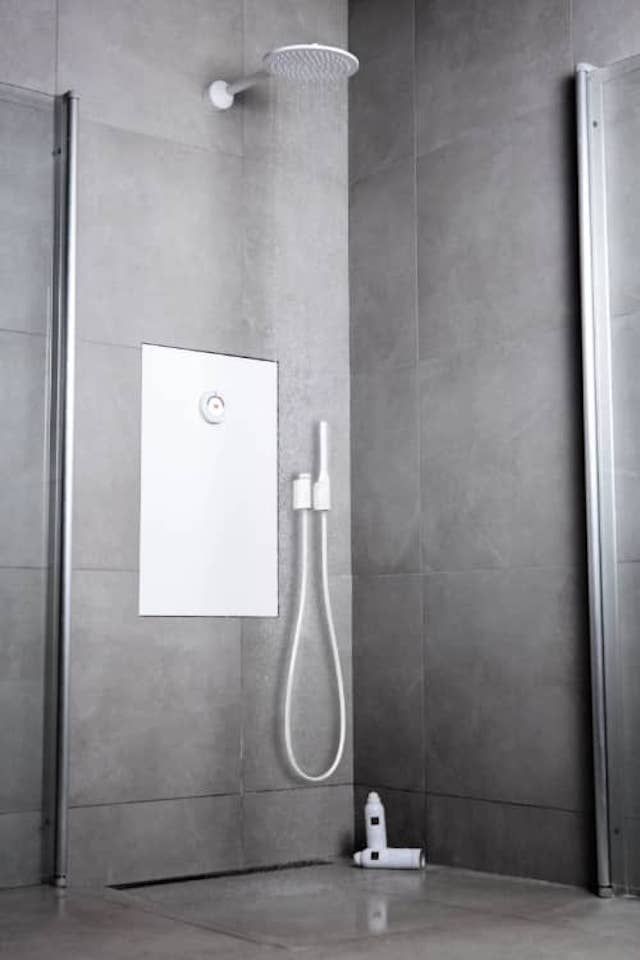 Note: This product is currently wait-listed in the United States.

Although recirculating showers are considered more elaborate (and costly) systems than basic shower heads, they may be the way of the future and the gold standard for water conservation in the bathroom. These cutting-edge technologies can save up to 80% of energy and 90% of water.

Many companies developing these new showers are offering waiting lists to purchase them, including Orbital Systems, an award-winning shower that estimates a return on investment within 3.5 years. Instead of using water once and wasting it, the Orbital shower reuses the warm, soapy drain water, filters and purifies it, then pumps it back through the shower itself, so it’s already heated. This method drastically cuts heating and water bills, meaning you can indulge in longer showers.

If you’re searching for a top-rated fixed shower head at a reasonable cost, it’s hard to beat the High Sierra Showerheads Classic PLUS. If a low price is a top priority, consider the Delta Fundamentals Single-Setting Shower Head, or if you’re craving a little luxury, the Moen Aromatherapy Handshower will transform your bathroom.

What to Consider When Shopping for a Low-Flow Shower Head

The easiest way to find a low-flow shower head is by looking for a WaterSense label, ensuring that the shower head uses no more than 2.0 GPM. The EPA has a handy online search option that sorts through WaterSense-labeled shower heads by brand and flow rate.

Existing Plumbing in Your Home

If you’re using an existing shower valve, check with the manufacturer first to make sure it’s compatible with a low-flow shower head.

If you have an older valve in your home, it's also good to check to make sure it has automatic temperature compensation (ATC) that is compatible with the shower head (and not designed for a higher-flow rate). If not, you may run the risk of temperature shock with a low-flow shower head.

Amber Nolan is a nature enthusiast and outdoor adventurer who is passionate about sustainable living. Her work has appeared on TripSavvy, Sherman’s Travel, Frommers.com, and 10Best.com. She lives off-grid, and one of her many eco-friendly projects is an outdoor, solar-powered shower that uses low-flow technology.