The 6 Best Rechargeable Flashlights of 2022

The best all-around rechargeable flashlight is the Streamlight LED.

Starre Vartan
Writer
Starre Vartan is an environmental and science journalist. She holds an MFA degree from Columbia University and Geology and English degrees from Syracuse University.
Learn about our editorial process
Home

If you haven’t bought a flashlight in awhile, you might be surprised to hear that rechargeable versions rank just as highly as those that need disposable batteries. While it used to be the case that you might expect a rechargeable flashlight to be less-bright or not last as long, that’s just not a problem these days.

Thanks to LED bulb technology, which can produce a bright, clean light using very little power, new flashlights may provide even more light than you might expect—or need, which is why the lights in this list all have variable settings.

This new generation of rechargeable flashlights all are reviewed as shining bright, steady light for tens of thousands of hours. The differences in price reflect how long they’ll hold a charge and how far the beam will reach, as well as waterproofing and some various light configurations (some have extra lights on the body of the flashlight, not just the front).

Below, you'll find the best rechargeable flashlights for all these situations. 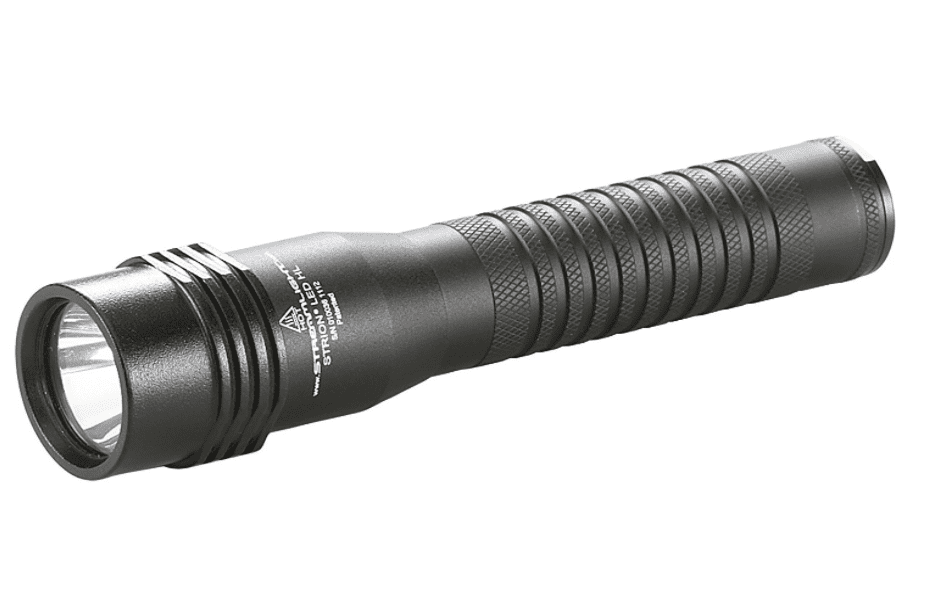 This flashlight is bigger (but not heavier) and more expensive than most of our other recommendations, but it gets rave reviews, even after two to three years of regular use by police officers, building inspectors, and other regular-flashlight-using professionals. They’re tough too—and can withstand being dropped numerous times on pavement without issues, probably because it’s made with LED technology that’s impervious to shock.

The Streamlight’s rechargeable battery can be powered up with an AC or DC charger (wall or car), and its High setting puts out 500 lumens for an hour, Medium is 250 lumens for two hours, and Low is 125 lumens for over three hours. It fully recharges in three hours. The exterior is made from anodized finished aircraft aluminum. When you set it down, this flashlight’s head is designed to keep it from rolling, a smart little hack. 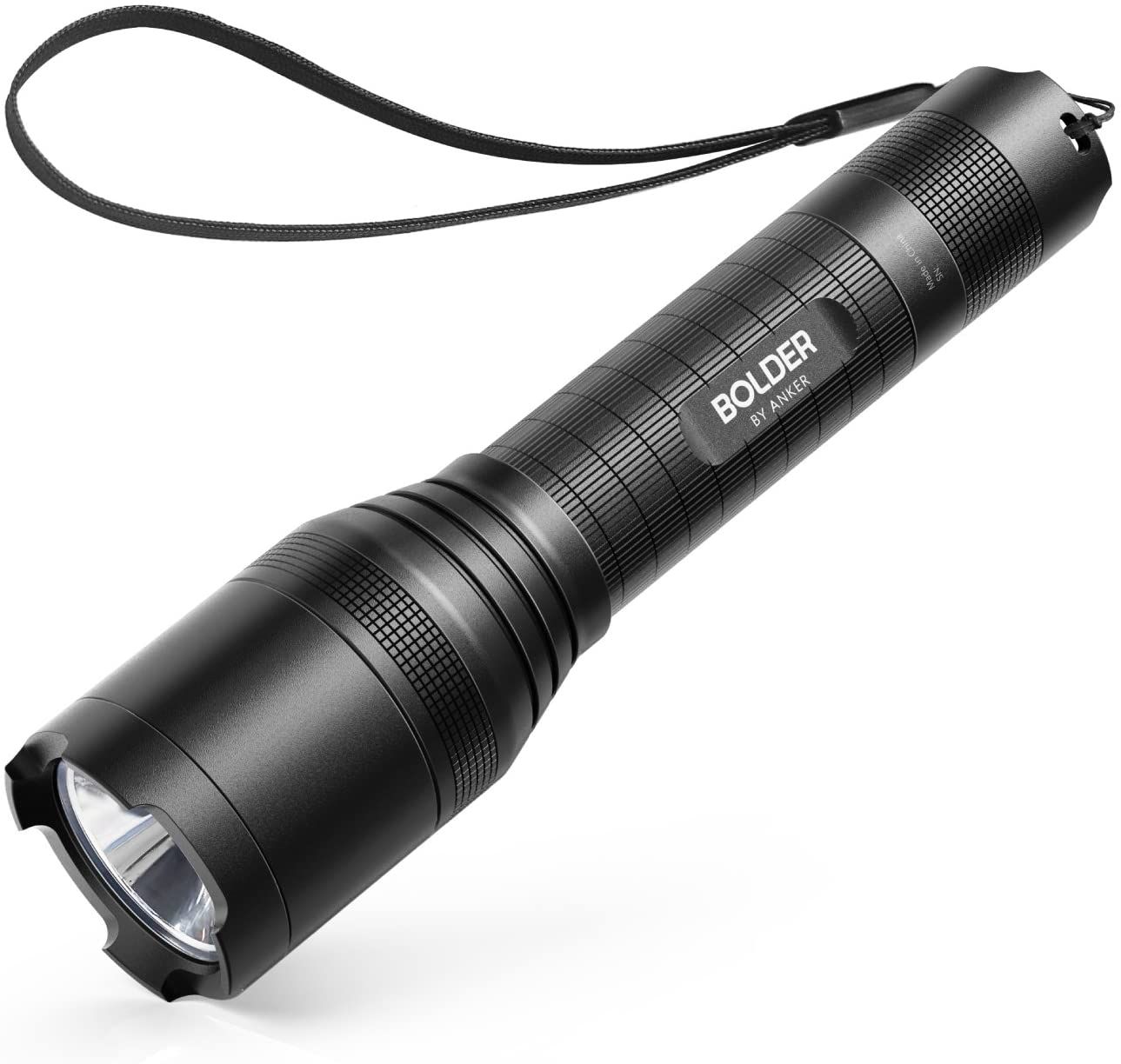 You’ll be covered in a storm with the Anker’s slip-proof frame and a tolerance for drenching rainstorms. This flashlight provides serious brightness when needed, thanks to a 900-lumen LED bulb that can reach almost 1,000 feet. The battery charges up via wall plug or USB. The beam can be zoomed from a wide beam to a narrow one, and it has five light settings: High, Medium, Low, a strobe function, and an SOS.

While a bit heavier than some of the others on this list, the Anker gets solid performance. Those who contacted the company with an issue often mention the excellent customer service, which is something you don’t hear often these days. 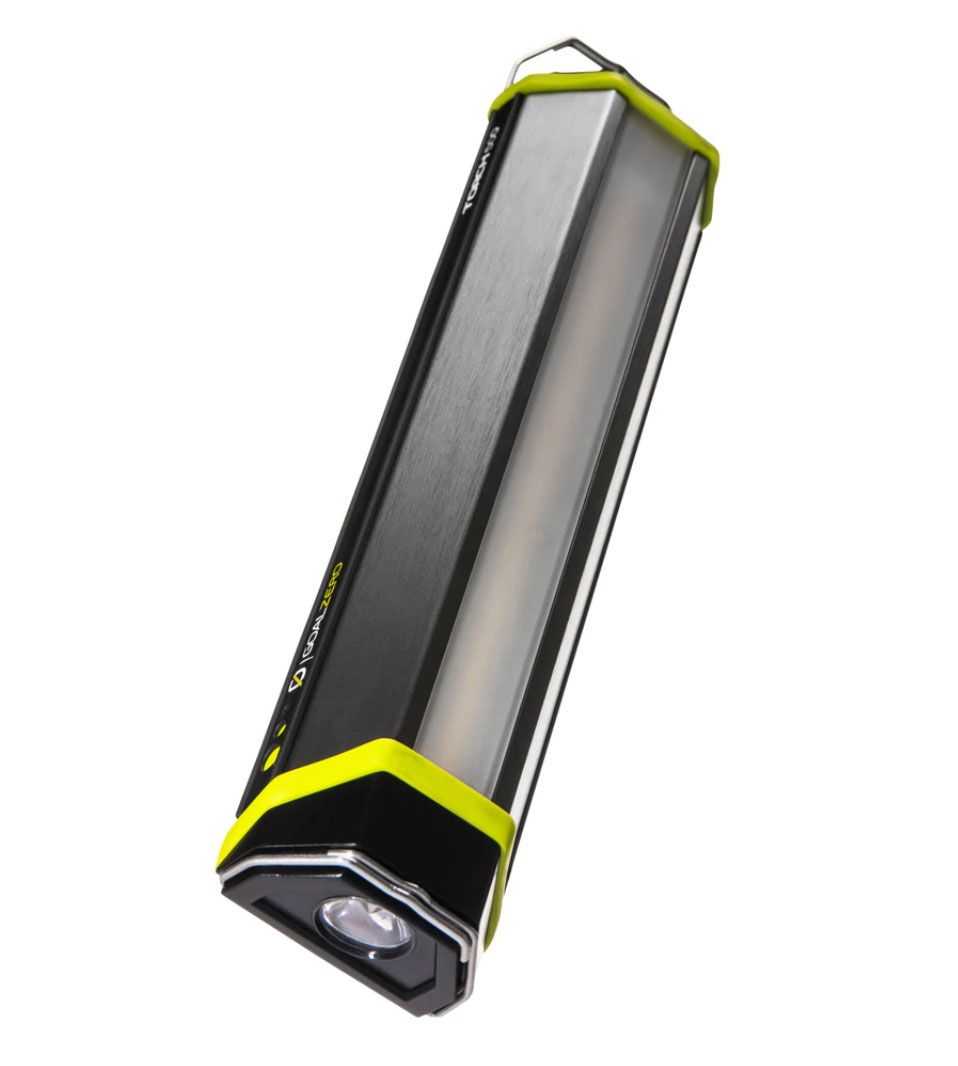 Not only can this flashlight from Goal Zero charge itself using a built-in solar panel, but it also comes with an impressive suite of features. You can also charge it via a USB port, and the light’s battery can also be used to charge a phone. As a light, it has floodlight and spotlight settings, and three levels of brightness. It has a maximum brightness of 500 lumens, and is waterproof.

The flat sides mean it stays put to charge and won’t roll while in use, but drawback of this shape is that some users find it more awkward to hold. 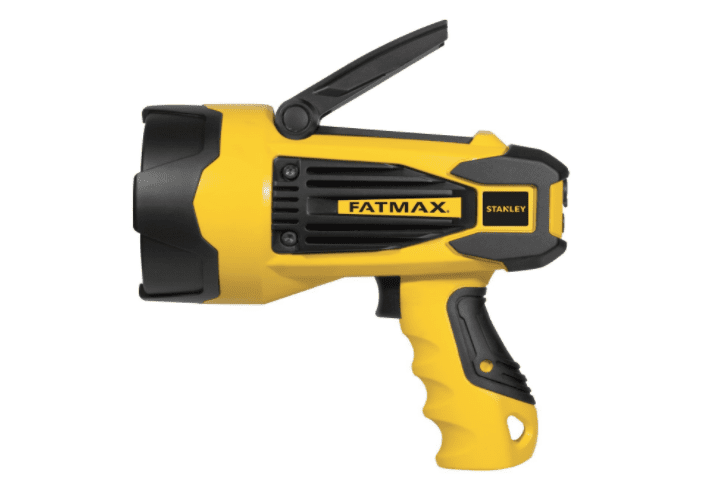 Courtesy of Amazon.com.
View On Amazon View On Tractorsupply.com

Sometimes you want a big light in case of emergency, for a night work project, or to light up a whole room when the power’s out. True to its name, this flashlight is on the bulky side, at 11 inches (plus handle) and weighing in at 2 pounds. But with that bulk comes options, like a pivoting stand that means it can be set up for hands-free use. The FATMAX can be charged with either AC or DC current, so car charging is an option, or you can plug it into the wall, and USB charging is an option too.

At 2200 lumens and a 10-Watt LED bulb, this flashlight produces a strong light. The lithium-ion battery will last for an hour at the highest setting, but closer to seven on the lowest (for a total of two brightness settings). It will hold its charge for a year, which is particularly useful if you want to keep on standby for emergency needs. Users most give this flashlight high ratings, but as with most rechargeable products, some users report the battery failing after a few weeks or months of use—but this seems to be a random issue and most don’t have this problem. The FATMAX comes with a year warranty in case you do encounter any issues. 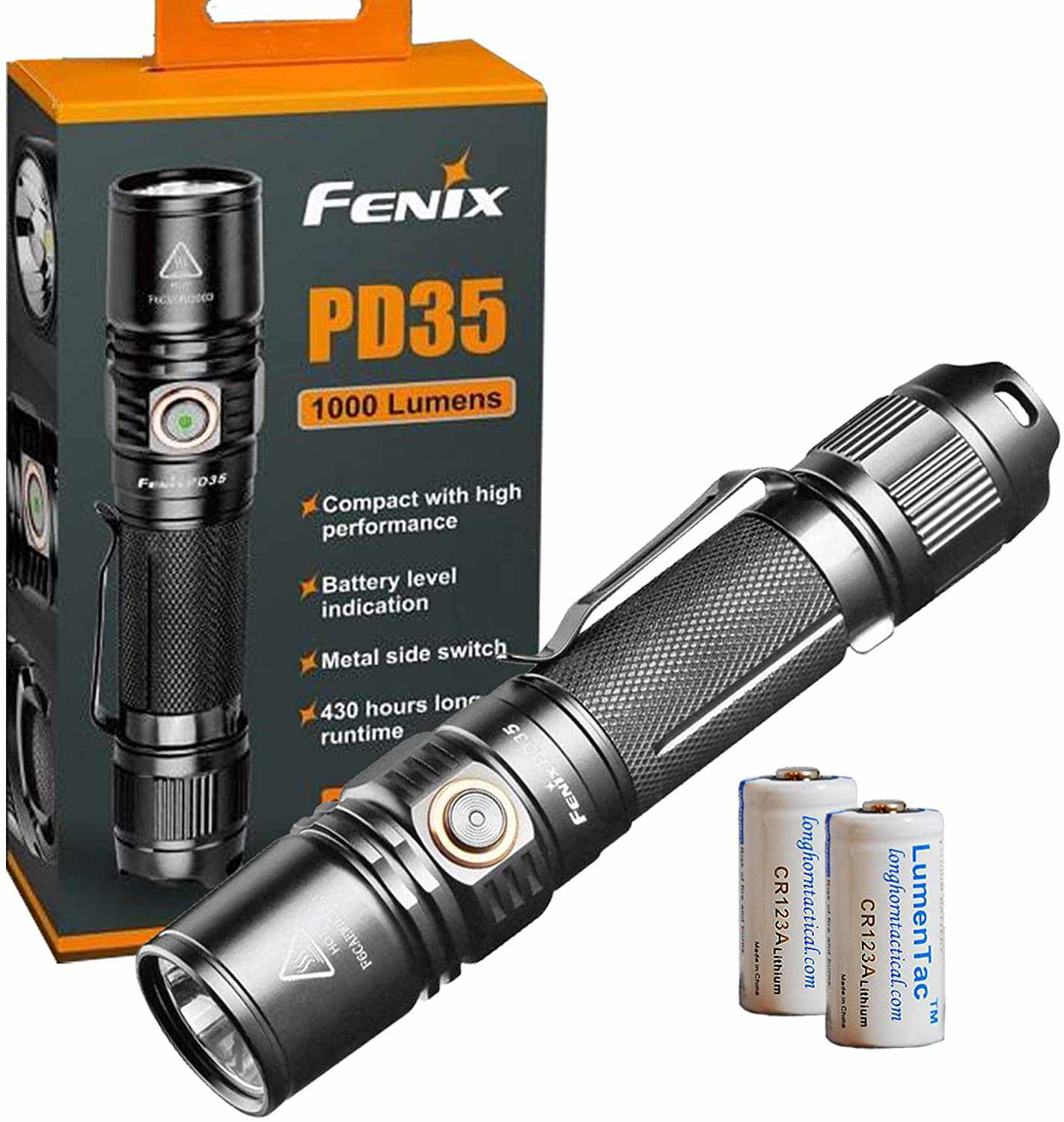 View On Amazon View On Fenix-store.com

At just 5.4 inches and 3 ounces this Fenix flashlight isn’t quite the smallest on the list, but its extra length allows this flashlight to pack in a full host of features—and it’s only 1 inch in diameter, so it’s far from bulky. This flashlight has six light settings starting with Turbo, which will shine 1000 lumens for two hours and 50 minutes, then High, Mid (150 lumens for 12 hours 25 minutes of light), Low, and Eco (three lumens for 430 hours on a charge). There’s also a strobe setting.

This light is waterproof to a depth of 6 feet, so it can be used in very wet conditions, and it comes with all the accessories you’ll need and then some. It has a pocket clip, holster, lanyard, spare o-ring, spare rubber boot, and charging cable. 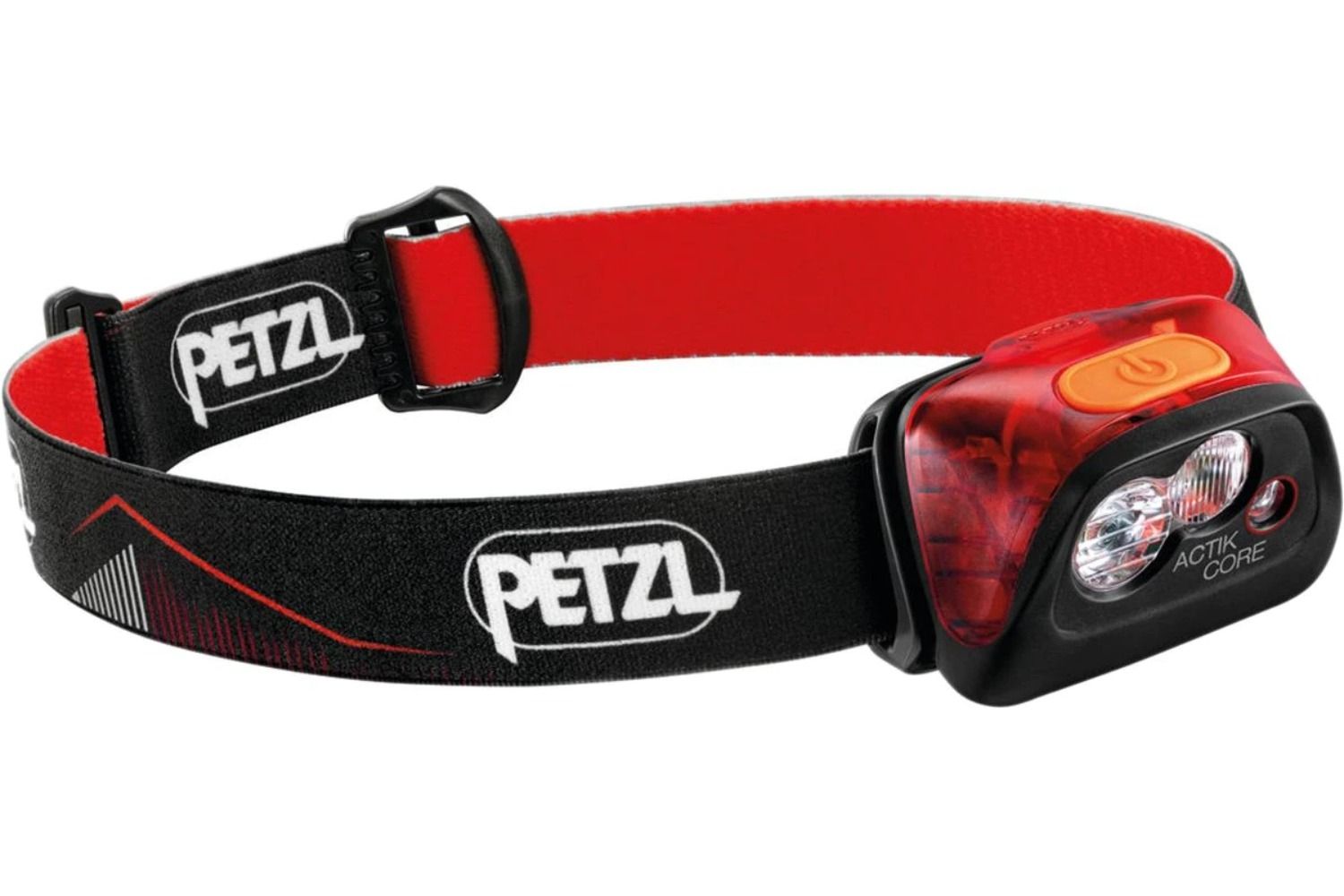 Headlamps solve two issues with one smart design: They’re hands-free, and the light is always directed where your eyes go since they move with your head. The Petzl runs on a quick-recharging USB (it takes three hours) or via AAA batteries, so you will have backup if you are away from power for long periods and don’t want to carry a larger power bank.

This headlamp can take getting splashed with water or sweat, and the headband is detachable for washing. The light has three settings: It will run for two hours on the highest setting, and 130 hours on the lowest one. It also has a red light option for preserving night vision.

Our pick for most durable and all-around best rechargeable flashlight is the Streamlight LED High Lumen. If you're looking to go solar, consider the Goal Zero Torch 500 Multi-Purpose Light.

What to Look for in a Rechargeable Flashlight

You’ll see lumens used as a light measurement scale in this and other discussions about flashlights. Don’t worry, even if you’ve never heard of lumens before, it’s fairly straightforward. A lumen is simply a measurement of the amount of visible light emitted by a source over a specific time period.

The number you see attached to the word lumens is simply how much light it gives over an area. So, for the most part, a higher number means a brighter light. However, brightness can be affected by how much the light is spread out. For example, a pinpoint beam vs. a spotlight beam could both emit 500 lumens, but the single beam might look brighter and travel farther because it’s concentrated.

Most of our recommended flashlights have multiple brightness settings and some have filters or allow for different thicknesses of beam as well, or may have colored filters (red is popular for easier night vision). Any manipulation of the beam can alter the perception of how bright a light appears.

Most of these flashlights use a USB port or wall attachment to recharge. However, some are also compatible with disposable lithium batteries or have a built-in solar panel, which could be handy options in some emergencies.

You should consider how you plan to use your flashlight: Is it for emergencies, to keep in the car, to use regularly for projects, or camping? Consider your particular needs when parsing the various options, and make sure your flashlight comes with the appropriate cables and connectors for the settings you want to use it in.

At Treehugger, we want to help our readers live more sustainably and be prepared for the next climate disaster. Author Starre Vartan has been an environmental and science journalist for more than 15 years. She founded an award-winning eco-website and has written a book on living green.

The 5 Best Rechargeable Batteries of 2022