Add some extra power to your two-wheeler.

E-bikes are easier on the environment than cars. They’re also easier to pedal than a standard person-powered two-wheeler. You get as much exercise riding an E-bike as you do a traditional bike. Thanks to improved technology and more people interested in alternative transit methods, E-bikes are also becoming more available—and more affordable.

But no electric bike is as cheap as the bike you already own. If you’re trying to reduce your carbon footprint, live in a small space, or practicing minimalism, repurposing what you already have can be a win-win-win decision. So, if you love your current ride but want to add some juice for getting uphill or for powering your cargo bike when you’re carrying a heavy load, you can, thanks to electric bike converter kits. To electrify your bike, you need a battery, sensors, controls, and a motorized wheel or a drive unit.

Here are the best options for upgrading your bike with an e-bike conversion kit. 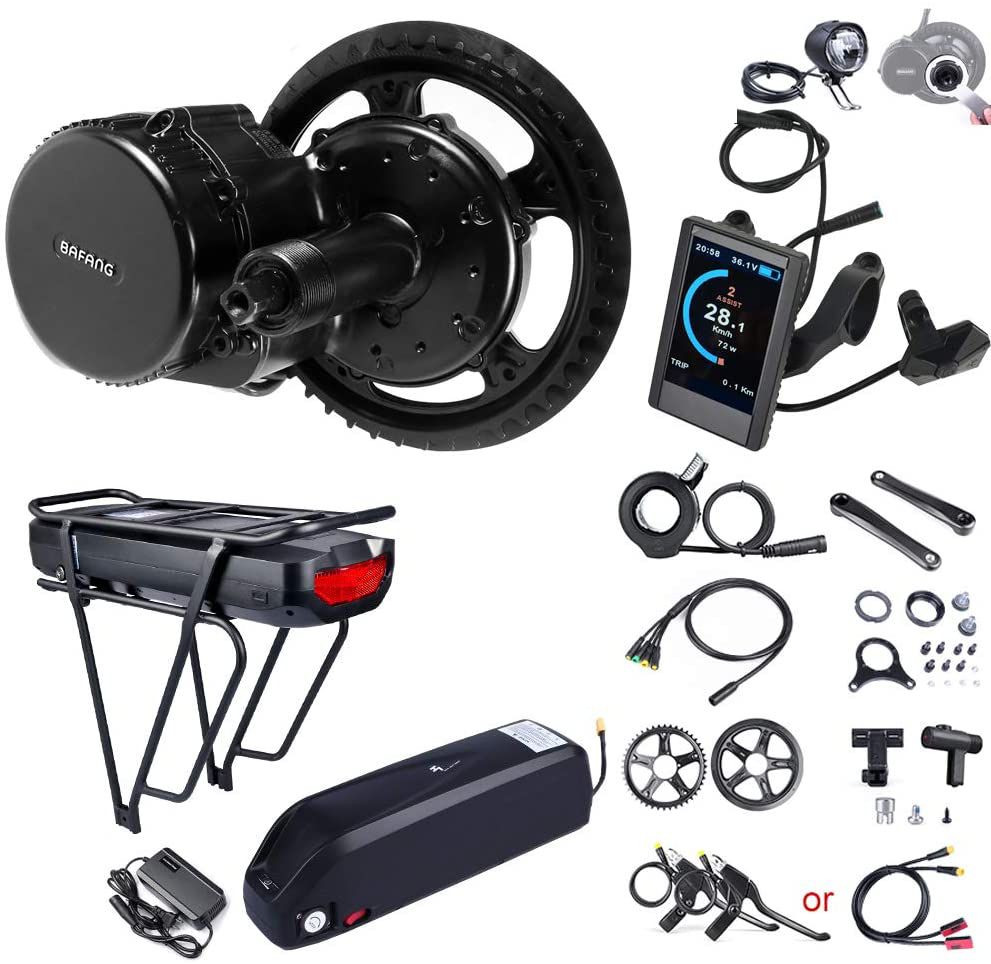 Since 2003, Bafang has been a leader in manufacturing e-mobility components and complete e-drive systems. Its products offer outstanding performance and reliability, and the BBS02B conversion kit is no exception, making it our top overall choice.

This mid-drive motor kit is versatile and compatible with road, commuter, and mountain bicycles. All you need is a bike with a 68-73 millimeter bottom bracket and the battery of your choice. Installation is relatively easy, and the battery is included. Once the kit is installed, you’ll be ready to tackle any hill.

Although several different conversion kits are available online from Bafang, those with more than 750 watts of power will be considered motorcycles in the United States. 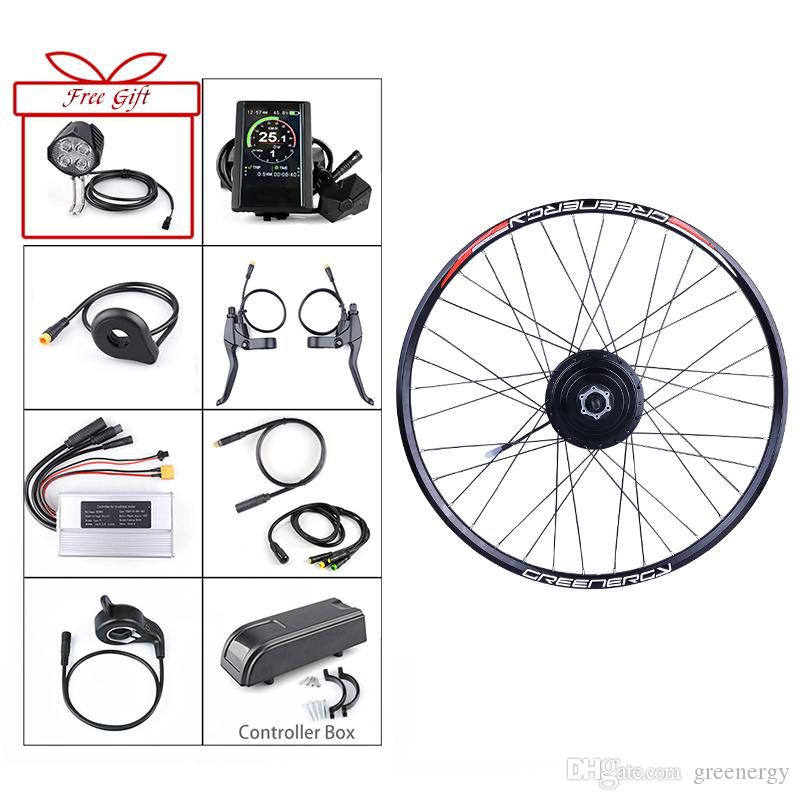 View On Amazon View On Aliexpress.com

This front-wheel E-bike conversion kit is easy to set up and easy on your wallet. Electrify your bike in one hour by following the installation video and manual. Don’t forget to choose the correct wheel size!

After setup is complete, ride around the town with pedal assist or switch to E-bike mode for longer trips. Commuters, long-distance trekkers, and mountain bikers can cruise up to 24 miles per hour. The battery is not included. 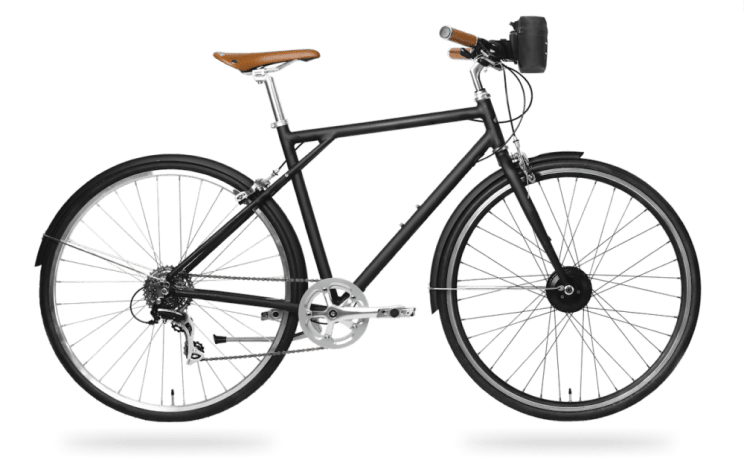 View On Swytchbike.com
It's an Easy Swytch to Turn Your Bike Into an E-Bike

Daily riders will love this easy-to-install, lightweight e-bike conversion kit. It is compatible with most mountain, road, hybrid, and step-through bikes, and disc brakes.

It’s as easy to install as swapping out your front tire. The controller and battery are combined into a 34.2-Volt power pack, which is included in the kit and mounts to the handlebars. That makes it easy to remove and keeps thieves at bay, but our tester did miss having the use of a handle bar basket. The battery pack is fitted with indicator lights that tell you how much juice remains and what assist mode you’re in. Once the system is set up correctly, you’ll be able to top out at 15-25 mph.

"In general, I love it. It makes my ride easier without feeling like I’m riding a giant bulky e-bike. It’s got a phenomenal amount of power for such a little machine and seems like it has a good battery life too." ~ Treehugger Tester 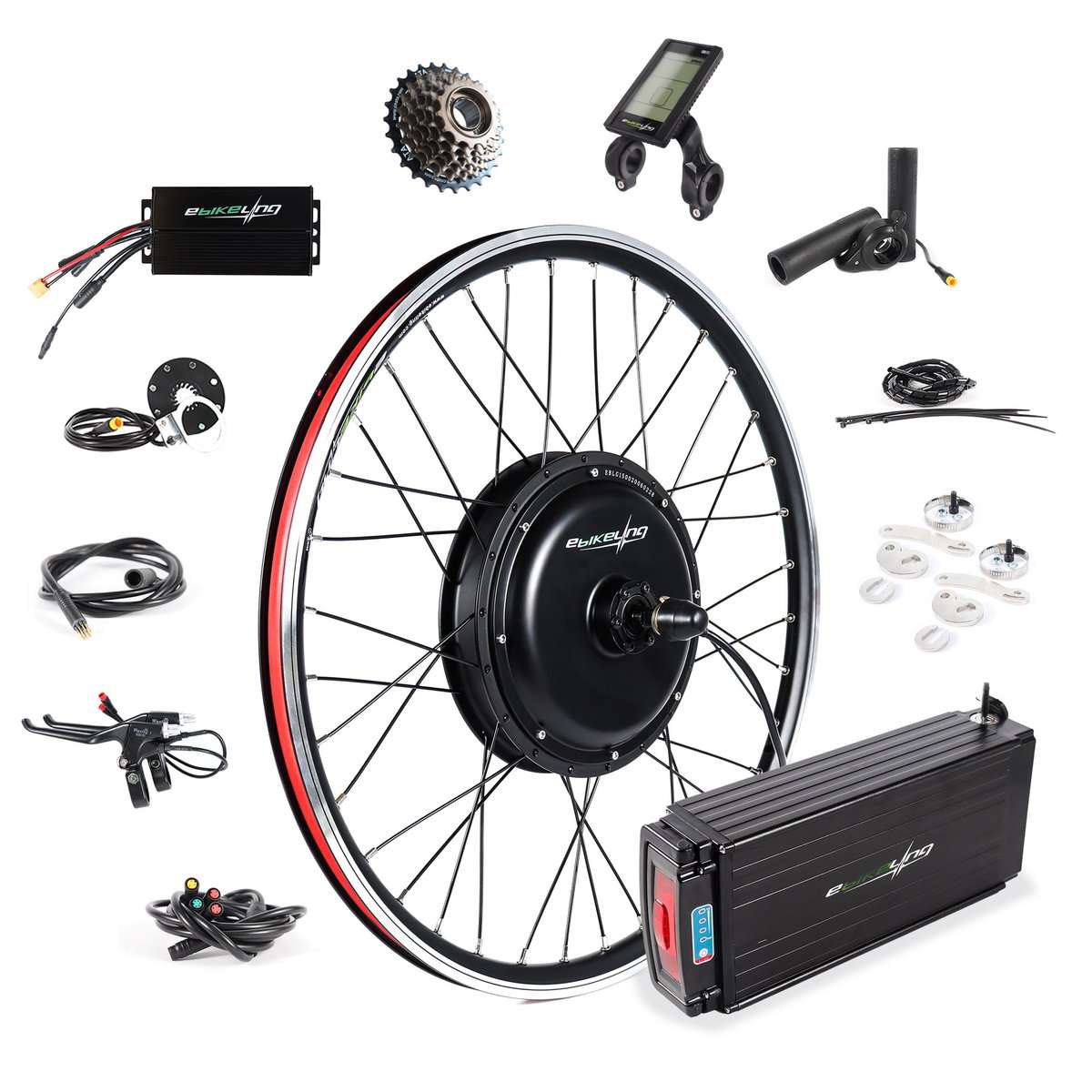 View On Amazon View On Ebikeling.com

Do you want to go farther or faster? You can do both with this setup from Ebikeling, with its 500-watt motor. Ebikeling makes it easy to buy different compatible batteries and other accessories in an a-la-cart way. There are seven different batteries that come in different shapes (bottle, triangle, rectangular), so that you can pick the one that suits your bike and needs best.

The double-walled rim and motor are ready to install right out of the box—just swap them out for your original bike tire. An LCD screen is included to help you stay within your town’s speed limit. You can choose between a front or rear mount, as well as a thumb or half-twist throttle. 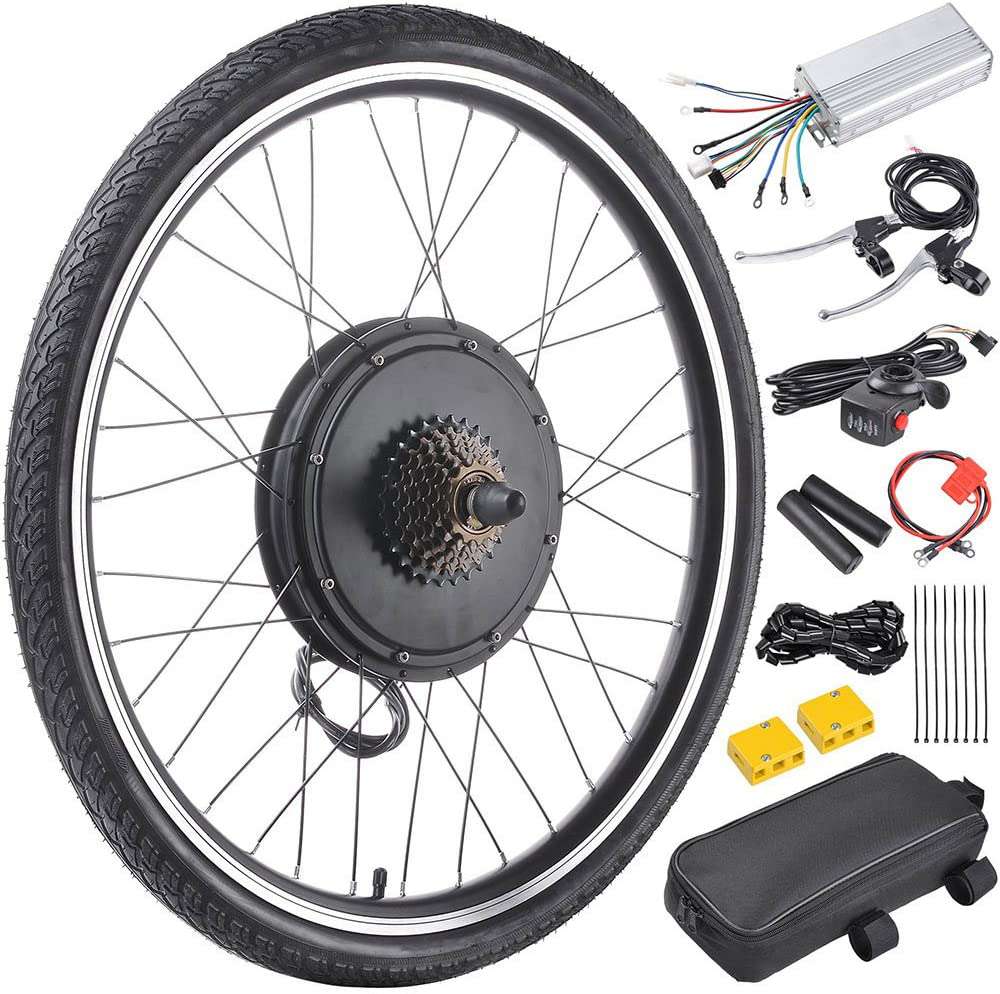 The aluminum frame offers durability and stability, which is essential when you’re rolling at top speeds of 28 miles per hour. Hand brakes turn the motor off automatically to both improve safety and conserve battery power. 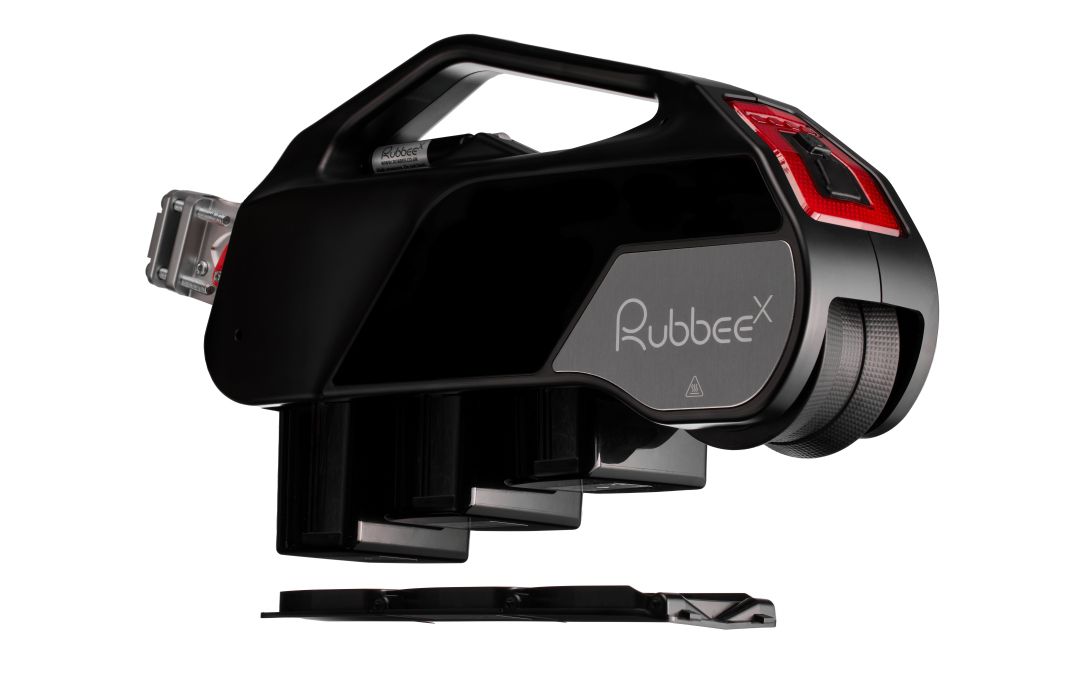 If you want the fastest conversion possible, and even the option to take a motor off your bike quickly, the Rubbee X makes it a snap. The Rubbee X gives you a boost by resting against the rear tire, and has a special release that lets you remove the motor without un-mounting the entire system. You control the power just by pedaling, as a wireless cadence sensor that gets mounted to the pedal crank sends information to the motor, which shifts automatically without any additional user interface.

This conversion kit has some other nice features. It has tail lights on the back of the motor, to give you some additional visibility when riding at night. The base model comes with one battery, which weight 6.1 pounds, gives you 250 watts of power and has a top speed of 16 mph. Upgraded models have two or three additional batteries, each offering more speed and power, but also adding more weight. It’s compatible with any frame type, and with tires that are between 0.5 and 2.5 inches in width and between 16 and 29 inches in diameter.

There are a few things to keep in mind before you buy. First, the product ships from the European Union, so there may be an additional import tax. Second, you’ll want to make sure you have plenty of room on your seat post to connect the motor.

Whenever you’re buying a newer technology, sticking with a known brand makes sense. That makes Bafang’s E-bike conversion kits a sound choice—in terms of quality and price. If speed is what you’re after, the kits from Ebikeling.

What to Consider When Shopping for an E-Bike Conversion Kit

Is the battery included? You’ll need something to power and charge your e-bike conversion kit. Many kits include a battery. Cheaper kits may not, though, which means you’ll need to source a compatible battery separately.

You'll also want to think about your power needs. The higher the motor wattage, the more power you'll get. A 250-watt motor is typically plenty of power to make the daily commute less sweaty. If you want to take your converted bike out on tougher mountain trails, you'll want more power.

Keep in mind that according to U.S. federal regulations, e-bikes with more than 750 watts of power are considered motor vehicles and require a motorcycle license.

You’ll want to check your state and local laws as some cities and towns have banned e-bikes from bicycle paths, so if that’s where you want to ride, you’ll want to make sure your town allows your upgraded bike to cruise around on them.

There are several kinds of e-bike conversion kits, and the ease of set-up and installation varies.

Treehugger has reported on dozens of e-bikes and e-bike conversion options over the past decade. To make this list, we deeply researched the market by reading other third-party reviews, user comments, and enthusiasts blogs. We also considered the product’s value and the manufacturer’s reputation.

Author Heidi Wachter has been writing about travel and adventure for over a decade. When she’s not writing, you’ll likely find her riding one of her six bicycles—even in the winter.