The 5 Best Composting Toilets of 2022

Take the plunge and invest in a water-conserving fixture.

Composting toilets get the job done, whether you’re off-grid on a boat or cabin, enjoying the freedom of living in a tiny house, or want to upgrade your old water-hog traditional toilet. They use little or no water and don’t require hookup to a sewer system, so they work by letting the natural process of aerobic decomposition occur.

Some are installed permanently with a vent to the outdoors, while others are portable so they’re easier to set up and can be moved to another location if need be. While many people build their own with the "humanure" system (also known as the bucket-and-sawdust method), there are also some great options on the market that offer convenience and less mess.

While there’s no organization that sets functional requirements for these products, some manufacturers seek NSF International certification, an independent organization that verifies consumer products meet basic standards such as being odor-free and able to handle the advertised capacity.

Ahead, the best composting toilets available. 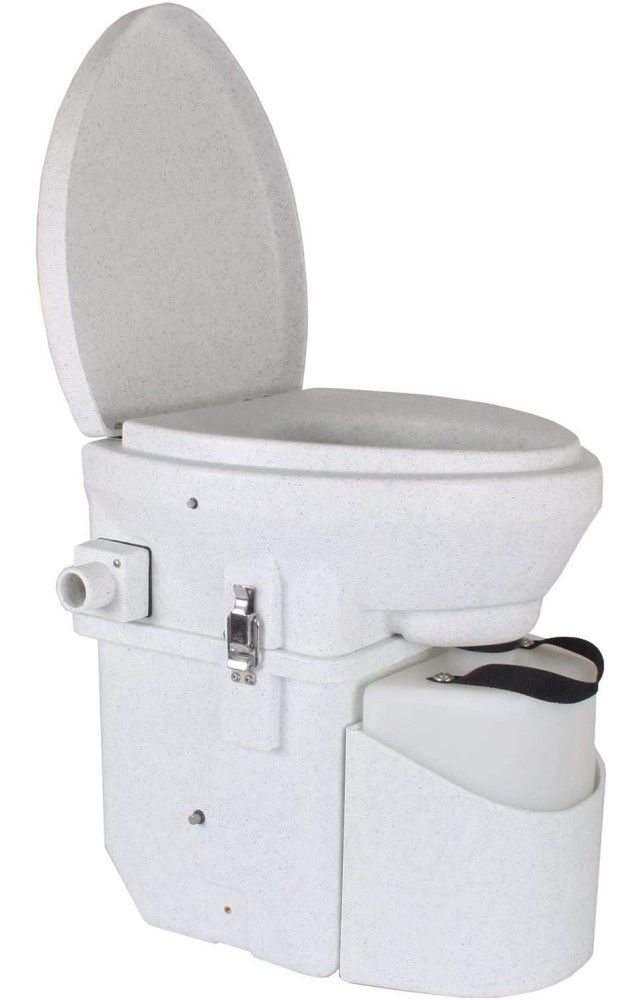 This self-contained toilet has stainless steel hardware, a 12-volt-powered built-in fan, and a hose to vent to the outdoors—and it’s made in the United States. The agitator to mix materials is operated with a space-saving spider handle (but you can also get it with a standard crank handle). Peat moss or coco coir work best as the bulking material, or substrate, to process waste.

There’s virtually no smell, so it’s ideal in a boat or RV. Many people say the liquids need to be emptied every few days, but the solids can go for months (the company estimates approximately 60 to 80 uses before you’ll need to empty).

The toilet was designed by two long-time sailors in 2006, and the company supports charitable organizations such as Unchained Movement, which combats domestic sex trafficking, and Warrior Homesteads, which gives homeless veterans sustainable housing on farmable land.

Because there’s a great deal of variation in how these units work and are installed, make sure to follow the manufacturer’s instructions when setting them up. Most don’t require a ton of carpentry or special skills to install. But in some municipalities, you may need to pull a permit for a permanent installation, so do your homework ahead of time so you’re aware of local regulations. 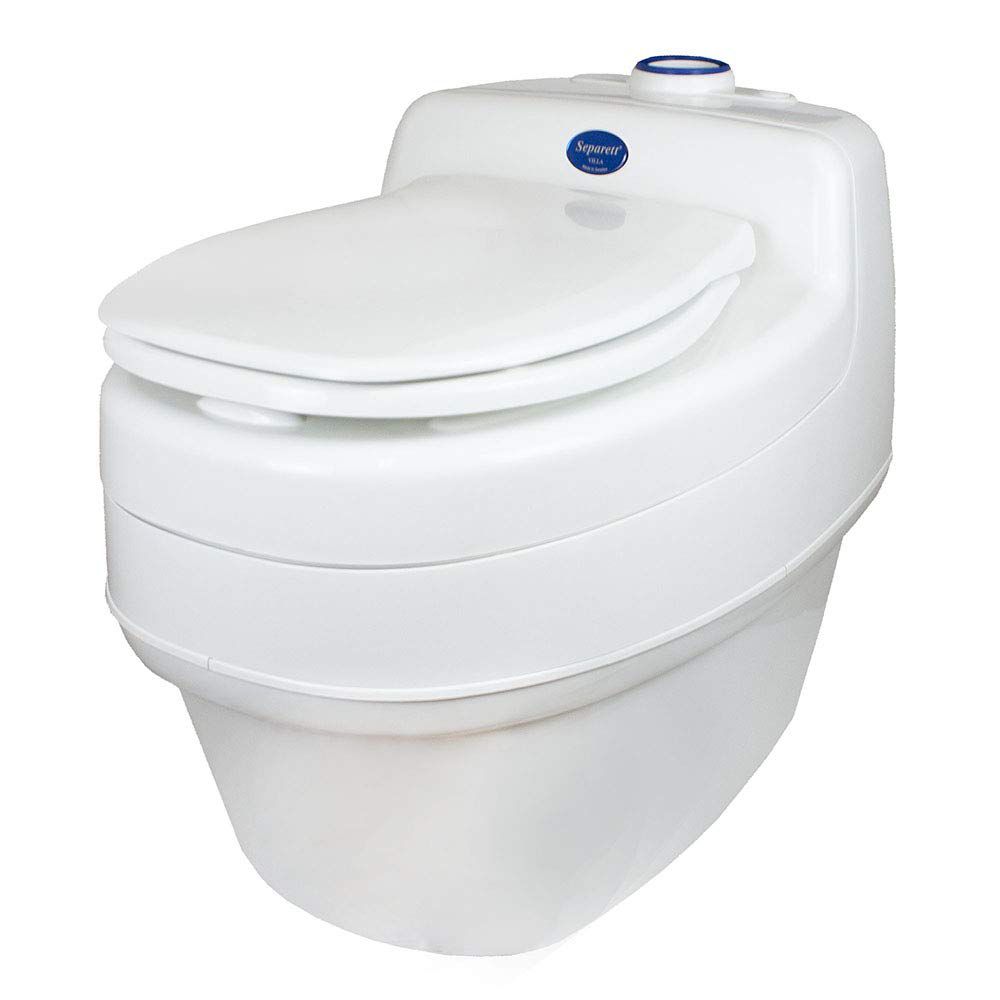 View On Amazon View On Separett.shop

This toilet has been made in Sweden since 1976 and happens to be the brand Treehugger founder Graham Hill has in his Maui home. The Separett separates urine and solid waste in order to reduce smell and the volume that must be handled. When you sit down, a screen covers the solid waste container and rotates it at the same time so contents are distributed evenly. There’s also a child seat that can be purchased and attached to the seat for little ones.

It comes with a fan that has AC/DC adaptors. You can use a biodegradable bag (set in the container) to simplify cleaning. There’s no need to add bulking material, so it looks and “feels” more like a regular toilet. The company supports projects to provide better sanitation to people in China and Peru.

Composting toilets are not maintenance-free, so follow your manufacturer’s recommendations to keep everything running well and odor-free. Finally, remind all guests that they must be seated during use; otherwise, units won’t properly separate liquids and solids, which helps prevent odors. 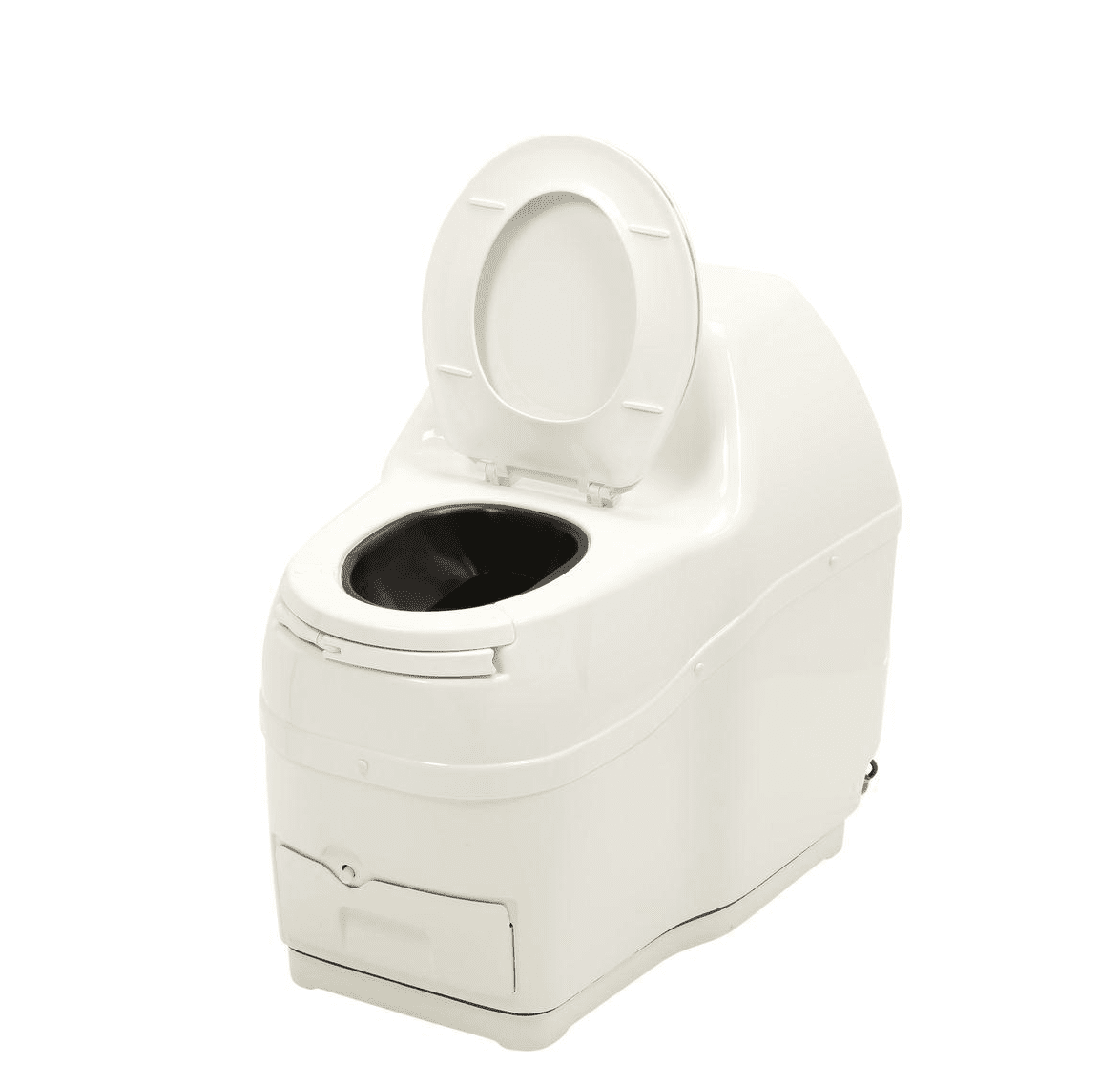 If you’re looking for a medium-capacity toilet, this low-profile unit is compact and easier on your wallet than many other models. It plugs into a regular 110-volt outlet and is designed for seasonal use for up to three adults or for one adult for residential use.

Use the handle to mix and aerate the materials in the three-chambered holding drum every other day the unit is used. You’ll also need to add a cup of bulking material per person per day. The customer service isn’t the greatest, but it’s easy to install and eliminates hassling with septic issues in rural areas.

The 8 Best Outdoor Compost Tumblers and Bins of 2022 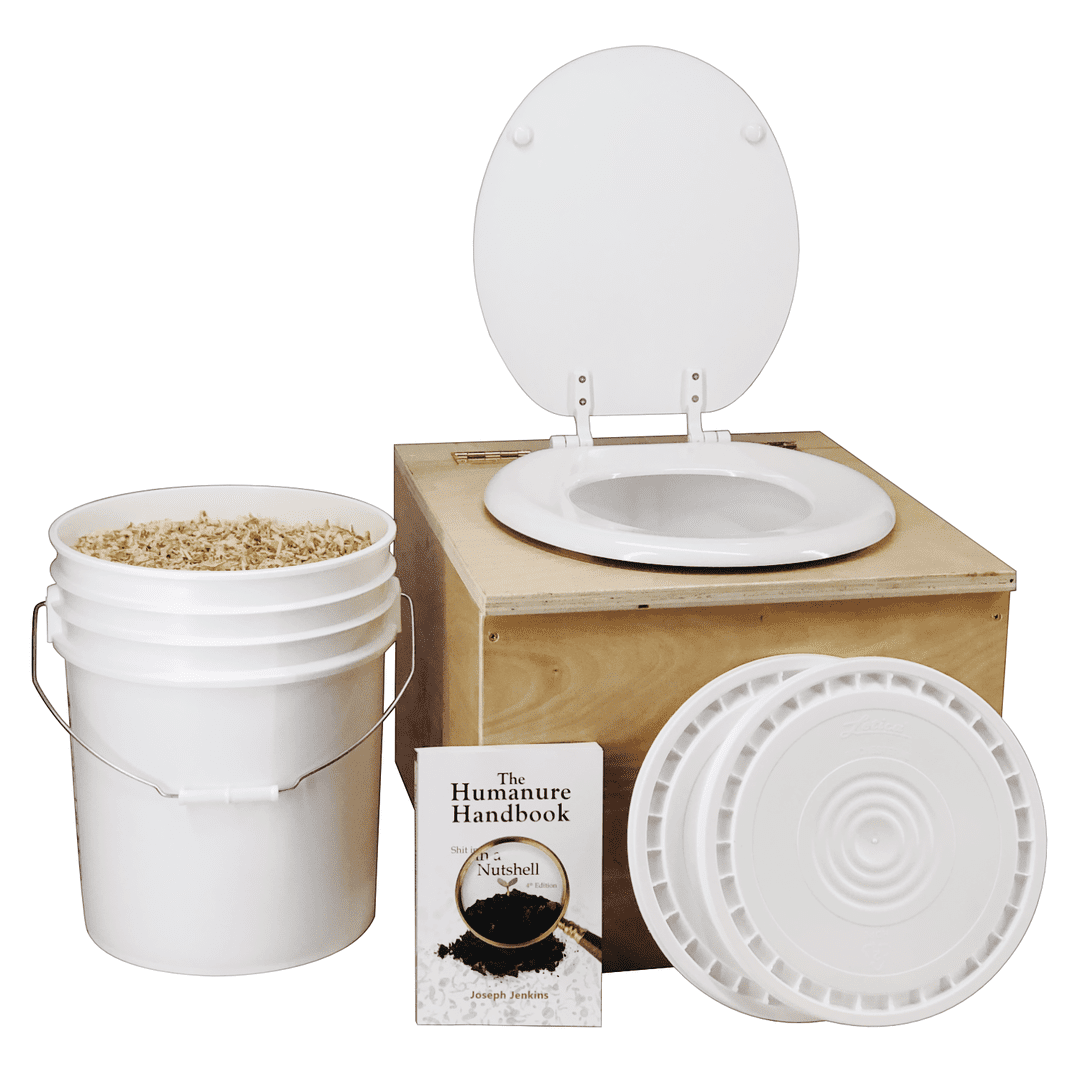 If you need a simple, economical solution for your off-grid camp, this low-tech option is the answer. It requires no electricity, no water, no plumbing, no venting, and no chemicals. Basically, it’s a bucket inside a wooden box with the toilet seat attached.

You’ll add sawdust to cover the waste after each use. When the container is full, you can add the contents to your outdoor compost bin or pile. The simple concept of this product has been promoted for years by Joe Jenkins in The Humanure Handbook (view on amazon). 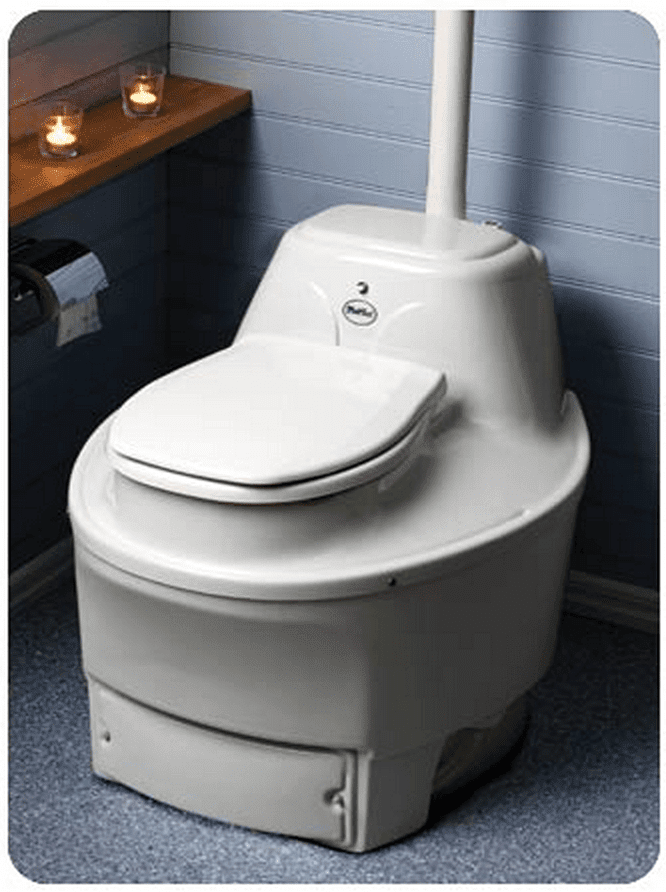 This closed-system toilet, made in Sweden, breaks down waste materials in the toilet itself. It’s pricey, yes, but it’s completely automatic: Sitting down opens the trap doors, and closing the lid activates the mixing arm to break down paper and distribute moisture in the upper chamber. A fan recirculates warm area underneath the compost. A float switch kicks up the heat if excess liquid is detected.

The dry material drops down into the lower chamber, where an LED light indicates when you need to empty it. The only additional expense is a compost mix, which must be added to the toilet to boost the process. It’s worth the price if you’re at all squeamish about maintaining other types—plus, it’s designed for families of four for full-time use and six for part-time use.

Our top pick of composting toilet is Nature’s Head Self Contained Composting Toilet (view on Amazon), which works well in boats, cabins, and tiny houses. However, if you’re looking for a super low-tech system for an off-grid cabin or outhouse, the Loveable Loo Starter Kit (view on Lovable Loo) might be the right choice for you.

What to Look for When Shopping for a Composting Toilet

While there is no organization that sets functional requirements for composting toilets, some manufacturers seek certification from this independent third-party organization, which verifies consumer products meet basic standards such as being odor-free or able to handle the advertised capacity.

There’s no recognized standard, but most manufacturers indicate how many uses or number of people the toilet is designed to accommodate. This is important because, quite honestly, you don’t want to have to empty it every day.

Some composting toilets require electricity or plumbing hookups to function, while others are self-contained so they work off-grid. Read the installation details to know what you’re buying.

How do composting toilets work?

There are many different types of composting toilets, but the basic concept is the same: They collect waste in a chamber beneath the toilet and allow microbes to break it down into 10% to 30% of its original volume. Some use a few ounces of water to flush; many also require the addition of a type of bulking material, or substrate, such as peat moss, sawdust, or wood chips after each use or periodically. This provides a source of carbon for the bacteria and keeps the pile porous. Some require hand cranking to mix the material, though the most sophisticated models have automatic mixing arms.

Fans may be used to pull air into the composting chamber to aid the evaporation of liquids in the composting process, while vents to the outdoors are used to prevent odors from escaping into the living area. Heaters may be used to maintain the optimum temperature for usage year-round. In time, the organic matter is transformed into a dry humus-like product that can be composted or discarded in the regular trash, depending on local regulations. Most liquid waste evaporates (sometimes with the use of a heater), unless it is in a self-contained unit that does not require plumbing. In that case, liquid waste is collected separately and disposed of in a conventional toilet or via the appropriate sewage system.

No, not if they are properly maintained by following the manufacturer’s recommendations for maintenance, such as emptying them after a certain number of uses.

How do you empty a composting toilet?

It depends on the model. Most have a chamber beneath that has separate liquid and solid waste holding compartments. Each manufacturer will have specific instructions about how to remove the tray or waste vessel, but it usually only requires a few steps such as releasing a cover or latches.