Protect this fascinating creature with their own home.

Arricca SanSone
Arricca SanSone is a health and lifestyle writer, specializing in home, kitchen, and gardening. She has written for Dotdash Meredith since 2019.
Learn about our editorial process
Animals

Bats are amazing creatures! With more than 1400 species, they’re found all over the world on every continent except Antarctica. Studies have shown that bats can help control agricultural pests. In addition, they pollinate flowers for the production of fruits such as agave, carob, cloves, and durian fruit. Some bats also disperse seeds as they fly, helping create new growth in clear-cut forests.

But bat populations are vulnerable to several different threats in recent years, including habitat loss. In addition, bats have low reproductive rates, typically producing just one baby, or pup, per year. Finally, white-nose syndrome is a disease caused by a fungus that appeared in 2006 and has decimated bat populations in North America.

Because these flying mammals spend more than half of their lives in roosts, where they rest and raise babies, it’s important to supplement the availability of roosts. In the wild, bats roost in tree cavities, under bark, in rock crevices, and in caves. But many bats have adapted to structures such as bridges, barn eaves, and bat boxes. Providing boxes around our homes is one way to attract bats to our gardens and to protect these fascinating and vulnerable creatures, which are a vital part of a healthy ecosystem.

Ahead, our picks for the best bat boxes, all backed by leading bat conservation organizations. 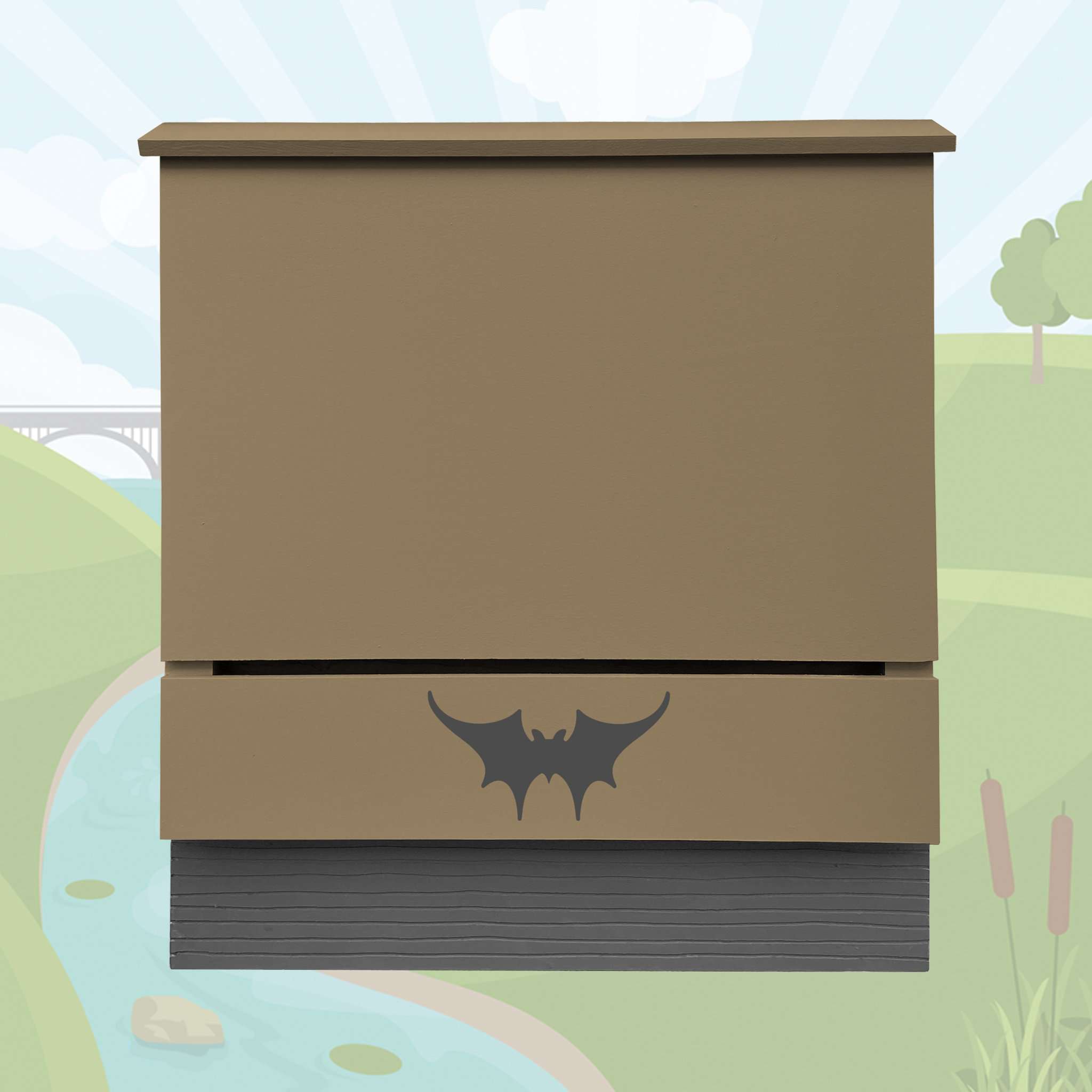 This sturdy bat box is 27 x 25 x 2.5 inches and can accommodate 35 bats. It’s made by hand in Austin, Texas, and comes in four colors, so you choose the one that’s suited for average July temperatures in your region. It’s constructed from 0.5 plywood for exterior portions and 0.375-inch plywood for interior partitions on multi-chambered models. Routered grooves inside and on the landing pad make it easy for bats to cling, and seams are sealed.

The bat house is certified by Merlin Tuttle's Bat Conservation (MTBC), a non-profit based in Austin, Texas. 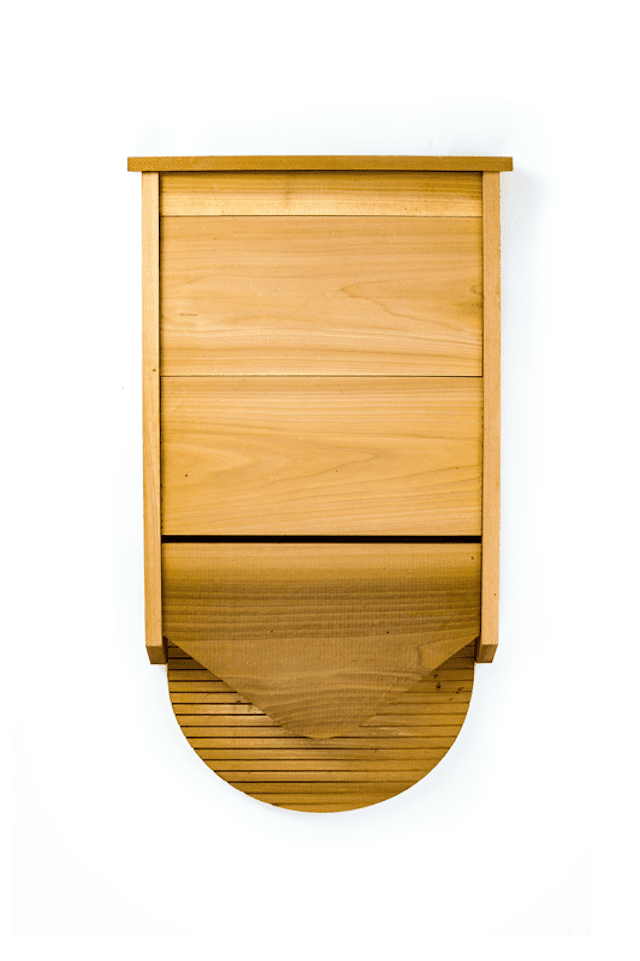 This attractive box, made in the United States from durable and sustainably sourced Western red cedar, is 27 x 15 x 3 inches deep to accommodate 40 to 50 bats. A backboard that extends below the box helps bats land safely. Interior surfaces have grooves to allow bats to grip, and dovetail joinery construction utilizes fewer screws for secure construction. The design is MTBC-approved.

The 8 Best Hummingbird Feeders of 2022 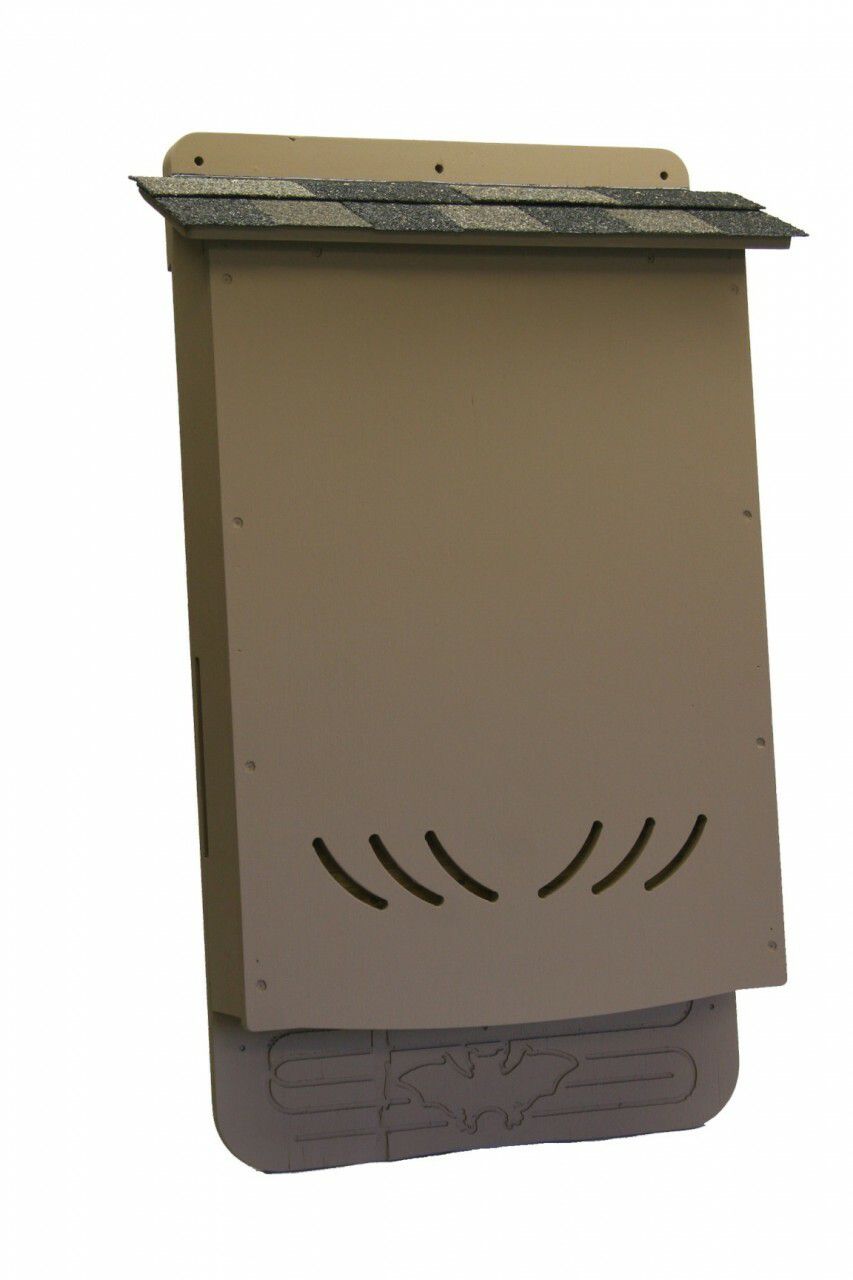 Courtesy of Habitat for Bats

This three-chamber bat house is designed for warmer climates, so it has air vents on the front. It measures 31 x 20 x 5.25 inches and comes in three different colors (choose the color that is appropriate for average July temperatures in your area). The seams are caulked, and interior dividers are spaced at 0.75 inches apart. It will accommodate 250 bats and is made in the United States. The design is in accordance with Bat Conservation International (BCI) and MTBC guidelines. 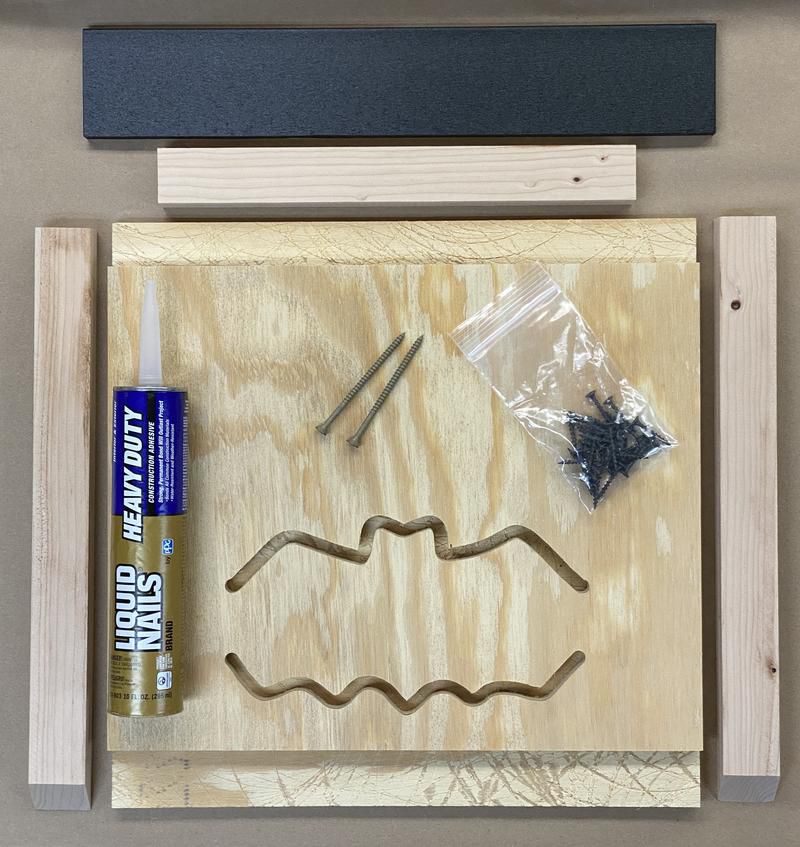 Courtesy of Bat Conservation and Management

If you’re looking for a simple, inexpensive option, this DIY bat house is a great choice. All the wood pieces are precut, and it comes with everything you need so you can assemble it in less than 15 minutes. It’s 16.5 x 16 x 2.5 inches and accommodates about 26 bats. While it’s designed specifically for endangered bonneted bats, more than a dozen other species such as Mexican/Brazilian free tails and big brown bats may use it. The roof is made from recycled plastic, and it’s MTBC approved. 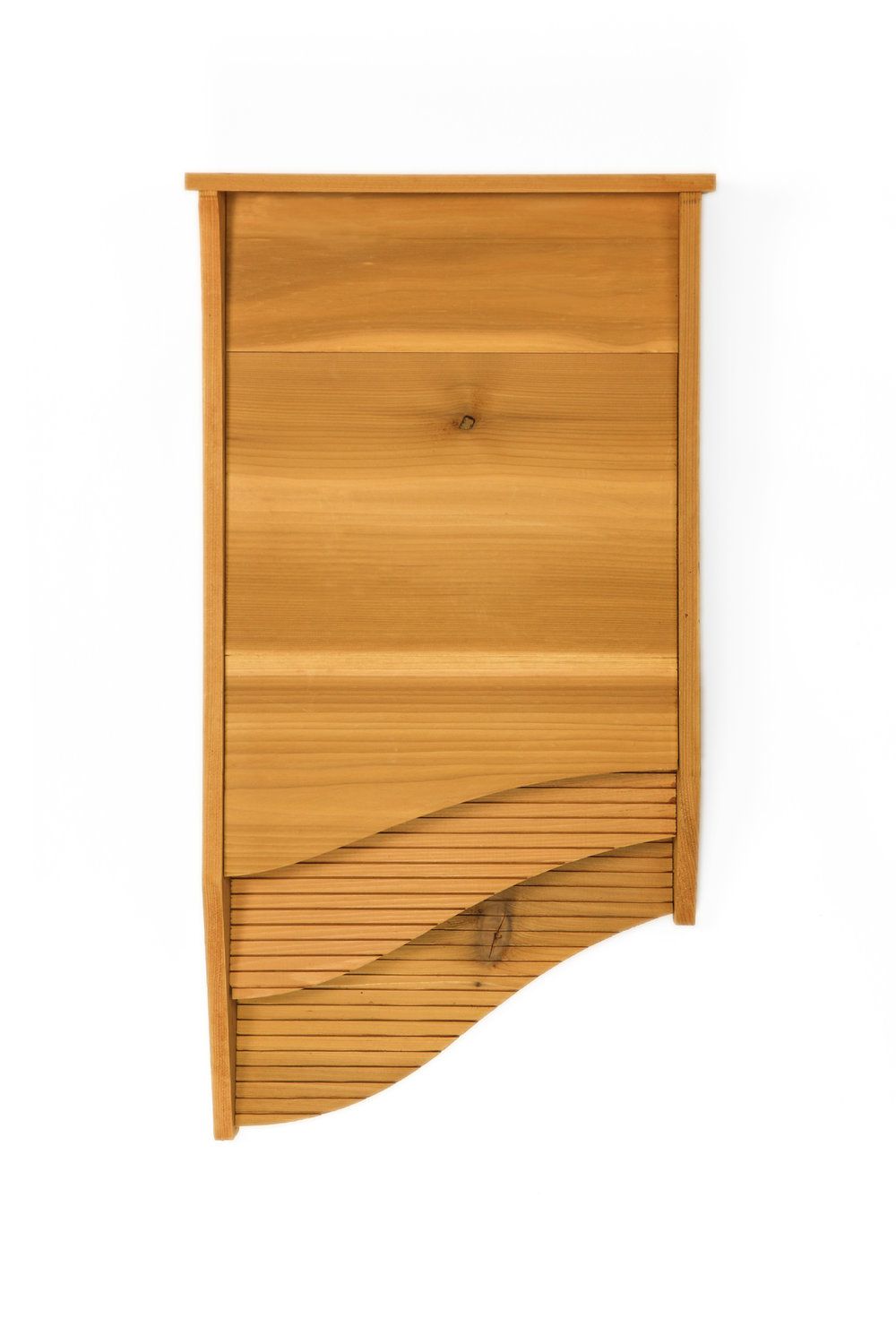 This aesthetically pleasing bat box is made from sustainably sourced Western Red Cedar and measures 36 x 19 x 5.125 inches. It has a dual-chambered design, accommodating between 100 to 120 bats. Handcrafted joinery uses fewer nails or screws, so it has a nice, snug fit to keep internal temperatures stable. The design is endorsed by bat conservationist Merlin Tuttle. The company was crowdfunded, and the co-owners were named to Forbes 30 under 30 Social Entrepreneurs in 2020.

Our top pick is the Austin Batworks Large Single-chambered Bat House, which is available in several colors (view at Austin Batworks). However, we also love the design of the Bat BNB Seneca, which is made from sustainably-sourced wood (view at Batbnb.com).

What to Look for in Bat Boxes

Research has shown that bats have a definite preference, and not just anything marketed as a bat box will do! Ideally, a bat house should be roughly 24 inches tall and 16 inches wide to ensure temperature stability. However, sizes can vary somewhat and still be functional, but you will have your best chance of occupancy with larger boxes.

The color of the bat house depends on where you live because different colors absorb heat differently. In a nutshell, the hotter the climate, the lighter-colored the box should be. The average July temperatures in your area determine the best color:

While Bat Conservation International (BCI) previously had a certification program for bat boxes, it’s no longer in existence. However, you still can look for boxes that follow their guidelines, as well as bat boxes certified by bat conservationist and educator Dr. Merlin Tuttle, the founder of Merlin Tuttle's Bat Conservation (MTBC).

Exterior seams should be sealed with caulk (because, like us, bats don’t like leaky houses!). The house can have a single roosting chamber or multiple chambers divided by vertical partitions of 0.75-inch in depth. The interior should be rough wood to allow bats to cling, and a backboard should stick out below the bottom of the house by about 3 to 6 inches to create a landing pad for safe access. For boxes in hot climates, there should be 0.5-inch wide air vents on the front to permit airflow.

You also can build your own with free templates from Bat Conservation International.

What is the best place for a bat box?

Bats prefer to use houses mounted on structures because of heat transfer from the building. Place the house a minimum of 12 feet above ground. But higher is better! The optimal height is between 15 to 20 feet above ground, so bats can swoop in. Make sure the area has about a 20-foot radius free of obstructions to maximize exit clearance and protect against aerial predators such as owls. Also, don’t mount boxes on live trees, which don’t get enough sun and can allow easy access by predators, such as snakes or raccoons.

Make sure your box receives 6 to 10 hours of sunlight in summer. A south or southeast-facing house with morning sun is best in cold climates. In hot climates, you can mount two boxes, one facing north and one south to increase the chances of occupancy.

Because bat boxes are open on the bottom, make sure they’re in an area where you aren’t going to mind bat droppings to accumulate.

How can I attract bats?

Bats like a habitat that consists of a mix of agricultural, forested and urban settings about 0.25 mile from a water source. It can take a few years for bats to roost in a new house, so be patient! There’s a better chance you’ll attract them if you follow the guidelines for the types of boxes they prefer. The good news is that once bats find a summer roost, they’ll usually return annually.

Do bats hibernate in a bat box?

Depending on the species, many bat species migrate to warmer climates in winter. Others do not leave but will hibernate in caves—though some may stay put in bat boxes in more southern locations. During hibernation, bats reduce their metabolic, heart, and respiratory rates to reduce energy use by 98 percent! Don’t disturb hibernating bats, which causes them to use stored fat meant for winter survival.

Treehugger wants to help homeowners protect these vulnerable creatures. The bat houses we recommend fit the guidelines suggested by bat conservation organizations which have researched bat needs and preferences.

Margaret Badore
Maggie Badore is an environmental reporter and editor based in New York City. She started at Treehugger in 2013 and is now the Associate Editorial Director.
Learn about our editorial process
View Article Sources